As cultural institutions come back to life this fall after the long pandemic shutdown, many are trying to lure audiences back with shorter shows, often free of intermissions.

The Metropolitan Opera is taking a different tack.

In an audacious bit of counterprogramming, the Met is currently staging the longest opera in its repertory, Wagner’s nearly six-hour “Die Meistersinger von Nürnberg.” Even in prepandemic times the work was a herculean undertaking, requiring an army of more than 400 artists and stagehands, breakneck set changes, spirited fight scenes and two 40-minute intermissions.

“There’s always room for epics,” Peter Gelb, the Met’s general manager, said in an interview. “There is always an appeal for huge events.” 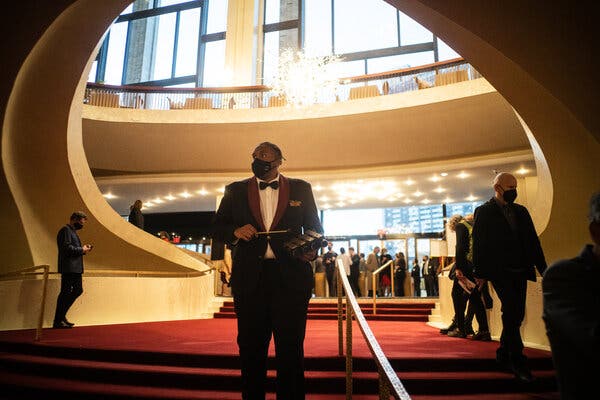 6:30 p.m.: “Meistersinger” is the longest opera in the Met’s repertory, and is audacious counterprogramming at a time when many cultural institutions are presented streamlined performances.Credit…Todd Heisler/The New York Times
6:48 p.m.: The bass Georg Zeppenfeld, who plays Pogner, is part of a cast of some of the finest Wagner singers in the world.Credit…Todd Heisler/The New York Times

As audiences have slowly begun to emerge again, many institutions have taken a more cautious approach, with shorter than usual running times. The New York Philharmonic, Carnegie Hall and New York City Ballet did away with intermissions this fall when they resumed performances, though all plan to bring them back soon.

The Met’s epic “Meistersinger,” luxuriously cast with some of the most acclaimed Wagner singers in the world and conducted by Antonio Pappano, comes as the company is trying to bounce back from the pandemic — which cost it $150 million in revenue — with a series of ambitious productions. It opened its season with Terence Blanchard’s “Fire Shut Up in My Bones,” the first opera by a Black composer in its 138-year history, which became a hit, selling out four of its eight performances. The past month has also brought Puccini’s elaborate “Turandot” and the Met’s first time doing the original version of Mussorgsky’s “Boris Godunov.”

But it is unclear if audiences will turn out for “Meistersinger” and other operas, which tend to be lengthy, amid ongoing concerns about the Delta variant, at a time when audiences must show proof of vaccination to enter and must wear masks during performances.

At the opening night of “Meistersinger” last Tuesday, only about 56 percent of the 3,700 available seats were full. The Met attributed the low turnout in part to stormy weather; at a matinee on Saturday, after the storm had passed and some strong reviews had appeared, 67 percent of the seats were full. Foreign tourists have also been largely absent from New York because of a ban on visitors from 33 countries, which is set to be lifted in early November.

The company, sensitive to concerns about the virus, has modified some offerings because of the pandemic, eliminating an intermission in a new production of “Rigoletto” opening on New Year’s Eve. But Gelb said that by staging the massive “Meistersinger,” which runs through Nov. 14, the Met was showing that even grand works could be performed safely.

“We are providing hope for opera lovers,” he said. “To be able to put on an opera like ‘Meistersinger’ is a symbol of the Met’s resolve.”

But the virus has added to the difficulty of presenting “Meistersinger,” a story about love and music-making in medieval Germany. Otto Schenk’s 1993 production was a logistical challenge even in normal times, requiring 14 truck containers to house the naturalistic scenery designed by Günther Schneider-Siemssen; 370 costumes; and a mighty 91-person orchestra.

The pandemic added new levels of complexity, as singers, orchestra players, dancers and stagehands spent long hours preparing to bring it back to the stage. (The final dress rehearsal clocked in at seven hours and 40 minutes). They are all required to wear masks wherever they go at the Met, except onstage. But once onstage, forget about social distancing: “Meistersinger” demands tender embraces, close-quarter brawls and impassioned singing, often within spitting distance of dozens of people.

Wearing masks during early rehearsals was taxing for some singers. “It’s really torture,” said the baritone Michael Volle, who plays the central role of the shoemaker and poet Hans Sachs. “You can’t breathe freely.”

The Met has made safety a priority, requiring coronavirus tests twice a week for all employees and guest artists. Masks and hand sanitizing stations are ubiquitous. Signs posted backstage remind people to report their symptoms if they feel ill.

Despite the strict protocols, in the run-up to the opening of “Meistersinger” the orchestra was forced to make a series of last-minute substitutions after one member tested positive for the coronavirus. Several other players also reported feeling ill, though they did not test positive. (Overall, since imposing the testing requirement earlier this year, the Met has reported 19 positive tests, out of 12,824.)

Susan Spector, an oboist in the orchestra, said she had been alarmed to find out that she had been sitting close to someone who tested positive. “Meistersinger” was a challenge even before the pandemic, and she said she looked forward to the days when the virus no longer posed a distraction.

“I always compare it to the Tour de France — the steepest grades are at the end of the race,” Spector said of the opera. “It’s a challenge, physically and psychologically, for everybody in the orchestra.”

While the crowds were somewhat sparse, many audience members said they were unfazed by the virus and safety protocols.

“It feels way less risky than indoor dining,” Matthew Keesan, 40, a software engineer, said during the second intermission on Tuesday. “Every single person is vaccinated, and that means the risk is very low. And we’re masked.”

Several staunch Wagnerites said they planned to attend several performances of “Meistersinger” in the coming weeks. “It’s heaven,” said Jean Andrews, 68, a retired lawyer. “There’s just nothing like Wagner: the huge orchestra and the huge sound.”

Inside a rehearsal studio around 10:30 p.m. on Tuesday, a group of choristers put on straw hats and checkered pants and adjusted giant foam pretzels that hung around their necks. About half an hour later, they would charge onstage for the final scene, where more than 200 people sing, dance, laugh and hug in a set designed to resemble a meadow.

“You can feel the excitement,” said Tshombe Selby, a tenor who plays a tailor. “It’s like jumping on a moving train.”

As the show came to an end, just before midnight, many of the artists celebrated, taking photos with each other onstage and making plans to go on to restaurants and bars.

Volle said he was moved that the production was able to go forward, despite the pandemic. “Being able to do this together,” he said, “this is the meaning of music.”