Late last month, on the New Jersey side of the Hudson River, the journeyman Brooklyn rapper Fivio Foreign barreled into his manager’s apartment whooping with pride.

Minutes earlier, the many times multiplatinum Nicki Minaj had suddenly released a new single that featured a sneering verse he’d recorded just days before, unsure of where it might end up, or when.

“Then she just dropped it,” Fivio — pronounced five-ee-oh — said, beaming at the serendipity of the surprise outcome.

For Minaj, a pop-star rapper, “We Go Up” was a foray into the caustic drill rap sound of the moment, and it positioned Fivio as her envoy to the New York underground at the very moment he was hoping to become its leading emissary in the mainstream.

“That was, like, the best feeling ever,” Fivio said as he calmed his celebratory stomping, dancing and cackling around the apartment, eyes still on his iPhone as it exploded with notifications. “Nicki Minaj!? Nicki Minaj is bigger than big. It’s trending already.”

For an artist who has collaborated with Drake, Alicia Keys and Kanye West, Fivio’s unbridled reaction might have seemed outsized. But ahead of his long-delayed debut album, “B.I.B.L.E.,” out Friday, the release of “We Go Up” served as yet another whiplash moment in a life now full of them, as he has worked to overcome tragedy, self-inflicted setbacks and skepticism about his chosen style. But his goal, he said, transcends artistic aims. 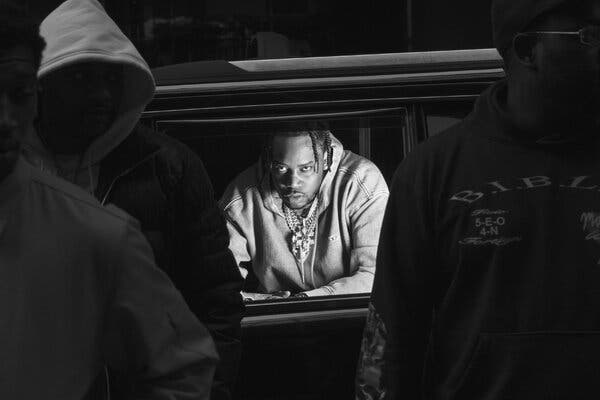 “The content don’t make drill,” Fivio said. “Drill is a beat. Drill is a sound, just like pop is a sound. What’s a reggae song about? It’s about what you make it.”Credit…Mark Sommerfeld for The New York Times

“Where people think I might be focusing on getting a No. 1 song, getting a No. 1 album or who follows me on Instagram, my focus is to be wealthy,” the rapper said plainly. “Generational wealth — that’s my focus.”

Along the way, Fivio has become a go-to spokesman for drill, hip-hop’s current problem child and creative engine, especially the New York variant prevalent these days in Brooklyn and the Bronx. To trace Fivio’s recent history is to ride along on the uneven trajectory of a booming movement — and to understand, in part, the commotion it is causing around the city, the country and the world.

During February alone, with Fivio’s album release date and 32nd birthday looming, the rapper went from mourning his crew’s go-to hypeman and dancer, known as TDott Woo — who was killed in a drive-by shooting hours after signing his own record deal — to releasing his most professional single to date, “City of Gods,” featuring West and Keys.

Days later, in a late-night meeting at City Hall, Fivio and others from the scene sat down with Mayor Eric Adams to discuss drill’s role in the violence currently affecting New York City’s youth.

Still ascendant and evolving a decade on from its birth in Chicago as a punishing and adrenalized musical document of gang rivalries and gun violence — plus the anger, hurt and hardening that such circumstances produce — drill’s hectic drum patterns, antagonistic raps and jumpy bass lines can be heard these days from Stockholm to Sydney. In New York, drill’s sound was warped by British producers who mimicked the Midwest, and then put their wonkier results on YouTube, free for the taking by local bedroom aspirants.

After years of bubbling awareness — stunted by the pandemic and the killing of Pop Smoke, 20, Brooklyn’s quickest rising prospect — New York drill has become increasingly coveted by record labels and larger stars even as it is linked by politicians, tabloid coverage and social media commentary to an uptick in shootings amid a nationwide surge in violent crime.

For years, law enforcement in cities like Chicago and London has blamed the hyperlocal specificities of drill lyrics — and their amplification online — for inflaming gang tensions, with others drawing parallels to the fear-mongering that surrounded gangster rap in the 1990s.

Fivio, once a spongelike apprentice to Pop Smoke despite his seniority, has veered occasionally toward cautionary tale. In the two and a half years since he scored a seven-figure deal with a major label, the man born Maxie Ryles III of East Flatbush has endured the murders of two close friends and collaborators, and been arrested twice, delaying his own musical development.

Yet through some combination of persistence and circumstance — including a stylistic breakthrough he came to behind bars — Fivio has also become perhaps drill’s biggest and best hope to settle into something less uncertain. “My role is to not let the drill die out,” he said. “Just like it’s feeding me, it’s feeding other people, too.”

On “B.I.B.L.E.,” the rapper tries to maneuver an unconventional sound onto a more conventional path: smoothing down drill’s street edge into something safely marketable.

Melodic and radio-ready, the album relies, like many major-label rap debuts before it, on singing guests (Kaycyy, Vory, Lil Tjay) and especially the voices of women (Keys, Queen Naija, Chloe Bailey) in a bid for more mass appeal. In line with drill’s evolutionary lurch toward musical familiarity, known as “sample drill,” there are also big-budget, pop-oriented tastes of Destiny’s Child’s “Say My Name,” Ellie Goulding’s “Lights” and Ne-Yo’s “So Sick” throughout.

Gun and gang talk, metaphorical or otherwise, is purposefully sublimated, though it’s in there, too (see: “Slime Them,” a pure growl, or “Left Side,” which nods more understatedly to Fivio’s long flouted Crip affiliation). But overall, Fivio said with a politician’s on-message discipline, he is hoping to divorce drill’s distinct musical quirks from its expected subject matter.

Fivio has veered occasionally toward cautionary tale. Yet through some combination of persistence and circumstance, he has also become one of drill’s best hopes to settle into something less uncertain. Credit…Mark Sommerfeld for The New York Times

“The content don’t make drill,” he insisted. “Drill is a beat. Drill is a sound, just like pop is a sound. What’s a reggae song about? It’s about what you make it.” And while Fivio defended the right of young people from tough neighborhoods to rap about their everyday experiences — “music is like the news” — he said his example could influence subsequent waves of drill rappers to expand their lyrical framework.

“The kids just starting don’t know yet, ’till I show them — I’m the forefront of it,” he said. “I’m still rapping about my reality. But at the same time, my reality is changing. What I was seeing three, four years ago, I would never be rapping those same things. In those times, 100 percent of the song was kill.” Now, there is celebration, but also introspection.

Cagey and understated in person, often relying on catchphrases and generalities, Fivio had boiled down his early drill music to an onslaught of ad-libbed exclamations that made his barrage of threats danceable and invigorating — Aye! Bow! Viral!

But while incarcerated last year in New Jersey on charges of gun possession and resisting arrest, uncertain of whether his career could recover from its false starts, Fivio began writing a verse that would salvage his chances at stardom. (The gun case is ongoing. Earlier assault charges stemming from a domestic incident were dropped. The Bergen County Prosecutor’s Office declined to comment.)

Upon making bail, Fivio took his new song to Funkmaster Flex’s freestyle show, an enduring New York proving ground, and unveiled a fresh flow that would catch the ear of West with searching lines like: “Now I got a question/for the reverend/if you kill a killer do you go to heaven?/if it’s for your safety can you own a weapon?”

Though Fivio had been an avid experimenter with various styles throughout his decade-plus of rapping in public, it was as if he unlocked a new level. When West called soon after to praise the performance, he invited Fivio to Atlanta, where the mogul was working on his street gospel album “Donda,” seeking that exact mix of menace and penance.

A chartered private jet ride later, as Fivio added similarly flavored lyrics to West’s song-in-progress, “Off the Grid,” he would stop to show his new mentor eight bars of rapping at a time. West’s only edict? Keep going. Fivio’s resulting marathon verse was immediately hailed as one of the year’s biggest breakouts.

“It had a little substance to it,” said Fivio, whose late mother was a Pentecostal preacher. “I just didn’t know that people wanted that from me.”

“I’m still rapping about my reality. But at the same time, my reality is changing.”Credit…Mark Sommerfeld for The New York Times

From there, the change in him was immediate. “We work a lot different now,” said Luis Mota, Fivio’s A&R executive at Columbia Records. “We don’t just go in the studio and knock out three or four songs. We go back and redo lines, add additional production — very similar to the way he saw Kanye do.”

These shifts in Fivio’s artistic, commercial and personal incentives may have aligned at the perfect moment. In hoping to clear the Destiny’s Child sample for his new song “What’s My Name,” Fivio needed personal approval from Beyoncé. “She felt like it was a little too vulgar,” he said.

But after some initial frustration, he worked to tone it down. “At first I didn’t understand — like, damn, Beyoncé going crazy,” Fivio said. “But it makes sense. That makes it a bigger record anyway.”

Yet even as he speaks openly about his pragmatic plays for mainstream acceptance — the better to support his three young children — he is also able to frame his gradual softening of drill as a community good.

Though vague on the subject, Fivio said he hoped to follow up soon with Mayor Adams about working together with the city’s rappers. “He really wants to stop the violence,” Fivio said. “It’s not that he wants to stop drill rap. I trust that it’s an even exchange.” (The mayor’s office declined to comment.)

That these career opportunities are now coinciding with his own need to mature as a man could only feel like God’s plan, he said. Or as he raps on his album, “I had an epiphany, and I saw victory.”

Now moving with a smaller circle and a licensed security guard, Fivio explained that he was building a quieter life for himself across the river in New Jersey, away from the threats and temptations of the old life that fueled his old sound.

“Growing is important,” he said. “The whole point is to move out of the hood. It’s the people that didn’t make it who feel like you’re not supposed to change.”

‘Mother Courage’ Review: Selling Her Wares Amid the Havoc of War

Ask a Cannes Cameraman: How Do They Shoot Those Standing Ovations?