The British artist Nick Relph likes to wander New York under cover of night, loitering in the vicinity of the city’s ubiquitous construction fences, doing a thing that seems at first glance — especially if you are a police offer — immediately identifiable.

He holds a dark object in his hand. He swipes it rhythmically up and down the wooden fencing and its building poster, a motion common to generations of graffitists and guerrilla wheat-paste-poster artists. Except that in place of a spray can or glue roller, his instrument is a lightweight VuPoint Magic Wand digital scanner, a cheap device about the size of an electric toothbrush, often used to digitize book pages and legal documents. And so instead of leaving art on the streets, Relph is slowly extracting it. Acting as a kind of human image-scraper, he has spent the past seven years amassing a vast archive of renderings of the buildings that form or will form the city’s sardine-can skyline, a once and future New York that feels mythical, mind-boggling, and often, frankly, terrifying. 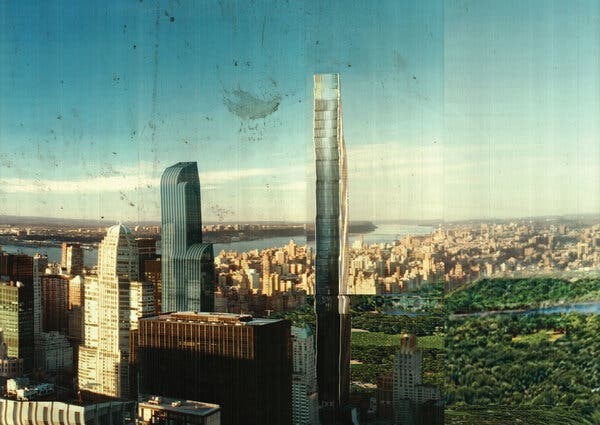 One of the scans Relph made in 2015 of a luxury condominium, 111 West 57th Street by SHoP Architects, also known as Steinway Tower, on what’s called Billionaire’s Row. Credit…Nick Relph and Herald St, London

More than 100 of his digitally stitched-together streetscapes — some of them graffiti-marked and squiggly, the results of urban chance and lo-fi methods — have been gathered in a new book called “Eclipse Body & Soul Syntax.”

Taking up an unlikely position within the rich history of New York City street photography that stretches from Berenice Abbott and Ezra Stoller to Roy DeCarava and Camilo José Vergara, Relph’s collection, published by Pre-Echo Press, might be described as the first post-internet expression of the genre. The images mostly show buildings that are, in one sense, real or in the process of becoming so. But the rendering posters, created by design firms and developers, are also highly fictive, cinematic branding documents created to comply with a city law requiring public images of buildings under construction.

Taken together, they depict a wildly aspirational luxury metropolis that seems to have tipped over without warning into “Blade Runner” dystopia, a city agglomerating by algorithm, recalling a line from J.G. Ballard’s 1975 novel “High-Rise”: “This was an environment built not for man, but for man’s absence.”

A 2017 scan by Relph shows the effect of his low-tech method of scanning directly from the wall. “Sometimes the poster was faded or wrinkled or I’d scan over it too fast,” he said.Credit…Nick Relph and and Herald St, London

Relph, 42, rose to prominence 20 years ago through videos and films he made with former London art-school classmate Oliver Payne that wove urban and suburban landscapes, experimental music and anomie into unclassifiable meditations on belonging and place. In a recent interview near his Brooklyn apartment, he said it had never occurred to him to take photographs of New York, where he has lived for the last 18 years and now teaches at Pratt Institute. But then, one birthday, he received the Magic Wand as a gift.

“It was really about just having the scanner with me in my bag when I was walking around,” said Relph, who is thin and wiry, with a mop of unruly brown hair tumbling toward his eyes. “I’m a walker. That’s how I make work, generally speaking. I just couldn’t ignore these posters, these very stark images. I pay attention to images. And the purpose of these is in one sense clearly defined and in another not at all.”

He added: “When I scanned the first few buildings, I thought: I have these images but I didn’t technically take a picture. And there was something really attractive about not having to point a camera.”

Nick Relph with a typical construction poster that has a rendering of a building similar to those scanned for ”Eclipse Body & Soul Syntax.” Credit…Sinna Nasseri for The New York Times

As a teenager, Relph was diagnosed with obsessive-compulsive disorder, which he continues to manage and which has shaped portions of his work. At times over the last several years, he said, the building posters consumed his thinking, the city’s up-and-out overdrive providing him with more material than he could possibly encompass.

The project was first included in MoMA PS 1’s “Greater New York” exhibition in 2015 but at that point, Relph said, he was really only getting started. Eventually, the work came to seem as if he was erecting a parallel-dimension New York in its entirety on his hard drives. Meanwhile, in the analog city, beginning in 2011, construction spending grew for eight consecutive years, reaching an all-time high of $60.6 billion in 2019 before the pandemic slump, more than any other American city, completely transforming swaths of Manhattan, Brooklyn and Queens.

“There is a slight rush in gathering more and knowing there are more to get,” Relph wrote in an email after our interview. “And there is an exhaustion in wanting/having to do so.”

A scan from 2017. “Nick’s been able to make something which will be read as a hugely significant document in terms of what it has to say politically, socially, economically about how we’re living in this moment,” said Michelle Cotton, a curator.Credit…Nick Relph and and Herald St, London

The painter Matt Connors, who founded Pre-Echo Press in 2016 to publish books by artists he admires, said that after learning of Relph’s project he would sometimes text him photos of extraterrestrial-looking construction renderings. “And invariably he would say, ‘Oh yeah, I already got that one,’” Connors said.

“Nick’s work kind of dances around finding ways of materializing itself, and it even dances around its subject,” he added. “He didn’t know how this body of work would come to live in the world, and when I get excited about work one of my first impulses is to say to someone, ‘It should be a book.’ In this case, the original material, the posters, are printed objects, and so it really made sense to put it back out on paper.”

The book — whose surrealist title is a mash-up of imaginary storefront names taken from the renderings — is almost entirely without text, except for a short poetic introduction in which Relph says, of the project: “Reader, it had the taste of theft/A theft so tiny as to be absurd.” Leafing through its pages feels like reading Rem Koolhaas’s 1978 classic “Delirious New York” on psilocybin. It also feels like walking through parts of the actual city in perpetual twilight, viewed through dirty sunglasses, wondering — especially against the backdrop of a global pandemic and a mounting climate crisis — what possible reason could account for so many stupendous structures?

Relph near a construction site in Brooklyn. He has been wandering the city, mostly at night, for the last seven years.Credit…Sinna Nasseri for The New York Times

Sometimes, the streets seem swept of humanity. At other times, people appear, tiny, attractive pedestrians and office workers, occasionally recurring like clones, concocted by graphic designers; unlikely vegetation and over-attractive trees spring up; a rendering of the Shed makes it resemble a mechanized version of the worm from “Dune,” rearing up to devour pedestrians on the High Line. Occasionally, a wavy glitch that looks like human fingers intrudes. This is, in fact, Relph’s fingers, which show up when he tries to get the 8.5-inch scanner working by rubbing its rollers against his hand.

“It’s all very low-tech,” he said. “I would try to get the best scan I could but sometimes the poster was faded or wrinkled or I’d scan over it too fast. Often, I was on my bicycle and I’d get up and balance on it to get to a tall poster, but I never carried a ladder or any other gear. ”

There is something of flânerie in Relph’s methods, or what he and Payne have called “power-dossing,” a tweak on the British slang for avoiding work by wandering around. Asked if the project proceeded from a philosophical position on the future of cities under late capitalism — Baudelaire’s “passionate spectator” or Walter Benjamin’s more politically pointed roving saboteur — Relph demurred.

“Some of these images have a really death-y feel,” he said. “Part of the reason why it took me so long to get this body of work done was me questioning: ‘Do I really want to put these images back out into the world?’ On the other hand, I certainly don’t think everything in this book is inherently evil. It’s never that simple.”

Michelle Cotton, head of artistic programs and content at Mudam, the contemporary art museum of Luxembourg, where five enlarged versions of Relph’s scans are now on view in an exhibition called “Post-Capital: Art and the Economics of the Digital Age,” writes in a catalog essay that the images seem, at the very least, to “describe a certain poverty in excess, perhaps indicative of a culture in which even bricks and mortar find their value in the fulfillment of digital prophecies.”

In an interview Cotton added: “I think Nick’s been able to make something which will be read as a hugely significant document in terms of what it has to say politically, socially, economically about how we’re living in this moment. Part of the irony is, we all know that artists move into downtrodden parts of a city because it’s what they can afford and then their presence makes it into a desirable neighborhood where sleek buildings like this get built and the artists get priced out.”

Relph on a street with a crane in Brooklyn. “Part of the reason why it took me so long to get this body of work done was me questioning: ‘Do I really want to put these images back out into the world?’’Credit…Sinna Nasseri for The New York Times

As it happened, only a stone’s throw from the apartment where Relph now lives in Clinton Hill, Brooklyn, a new 17-story apartment complex is rising above the mostly low-slung neighborhood. During our interview in the courtyard of his building, the metallic clang of construction and bleating trucks often drowned out speech. Before I left, Relph produced the scanner from his bag and walked dutifully over to the municipal-green plywood fence to register one more edifice of an uncertain future.

“Another couldn’t hurt, could it?” he asked.