Although Sonia Manzano has won 15 Emmys for television writing and numerous accolades for her decades playing Maria on “Sesame Street,” she couldn’t have been more emphatic — or colorful — when asked if she had ever wanted to develop her own preschool show during all those years.

“I’d rather stick a pin in my eye than try to create a series after ‘Sesame Street,’” she said, describing her prevailing attitude while working on that show. “I mean, how do you top that act? ‘Sesame Street’ did everything.”

Well, maybe not everything. In a recent video interview, Manzano, now 71, described how PBS Kids persuaded her to become not only the creator of a preschool show but also one of its executive producers, writers and voice actors. Her animated series, “Alma’s Way,” whose title character is a 6-year-old New Yorker of Puerto Rican heritage, doesn’t try to outdo “Sesame Street” so much as complement it.

Premiering on Monday, the new series amplifies that earlier show’s attention to diversity and gives children ages 4 to 6 an unexpected guide to critical thinking. If the theme of “Alma’s Way” could be summed up in three words, they would be “Use your head.” 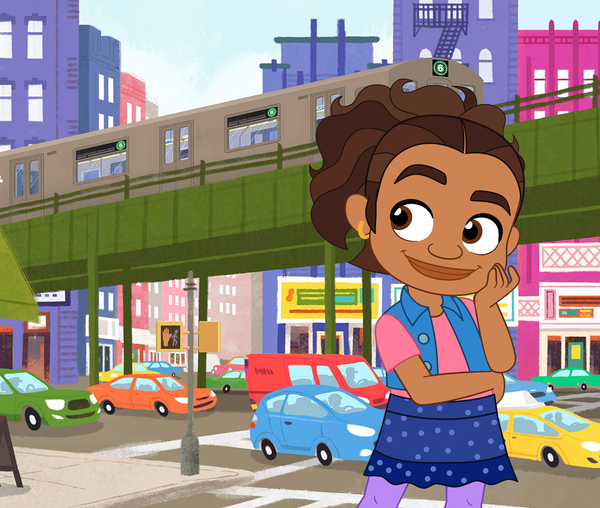 The makers of “Alma’s Way” wanted their depictions of Bronx life to be very detailed, including images of the No. 6 subway train.Credit…Fred Rogers Productions

The series is “not just about Puerto Ricans, it’s not just about Latinas,” said Summer Rose Castillo, a 9-year-old from the Bronx who voices Alma. “It’s about so many different types of families.”Credit…Fred Rogers Productions

“We didn’t have a show about thinking,” said Linda Simensky, head of content for PBS Kids, who, in 2013, urged Manzano to develop a series about a Latino family after discovering the many children’s books she had written. Simensky left the theme up to Manzano, who thought back to her own childhood resourcefulness and to a resonant remark from Lin-Manuel Miranda’s Broadway show “Hamilton”: “I’m not stupid.”

“That line, and it’s such a simple line, was so fraught with meaning,” Manzano recalled. She added that it reminded her of “kids who think that they are stupid because they don’t have the answers. And somehow I felt that that was part of what ‘Alma’s Way’ was about.”

Young Alma Rivera finds her own answers, using what Ellen Doherty, the chief creative officer of Fred Rogers Productions, which produces the series, called the small heroine’s “think-through moments.” Confronting a problem in each 11-minute story — there are two in every half-hour episode — Alma steps back and considers the alternatives, the perspectives of those involved and what she can do.

Sometimes the situations are funny, as in the premiere, when she tries, by herself, to improve her distracted mother’s mofongo (a Puerto Rican dish containing fried plantains). After experiencing a “Sorcerer’s Apprentice” kind of mess, she asks herself, “What should I have done instead?”

At other times, the premise is more complicated, as when Alma must figure out a solution, step by step, when all her friends want to play in one cardboard refrigerator box.

Manzano, center, as Maria in a scene from “Sesame Street,” a role she played for 44 years.Credit…Sesame Workshop

“I remember thinking how great it would be to do a show where we took problem-solving strategies and applied them to things other than math,” said Doherty, a veteran of “Cyberchase,” a math-filled series on PBS Kids. “That is part of what clicked for me with the show.”

Alma receives additional guidance from the supportive Rivera family, which includes her papi, a veterinarian; her mami, a music teacher; and her little brother, Junior. But Manzano also wanted the series to resonate with young viewers in more difficult circumstances.

“In my heart, I’m speaking to the underserved child,” she said, adding that “Sesame Street” aimed for the same audience. But whereas that series is set in an unspecified, “Harlem-ish brownstone area,” she said, “‘Alma’s Way’ is absolutely placed in the Bronx.”

The series is so intent on capturing Manzano’s native borough that the producers entered into an agreement with the Metropolitan Transportation Authority to use an animated version of the No. 6 subway train in the opening sequence and its recording of “Stand clear of the closing doors, please” during some episodes. (When PBS Kids tweeted a promotional image in August, Representative Alexandria Ocasio-Cortez, Democrat of New York, excitedly responded on Twitter, “Wait — that’s our community’s subway line!”)

Manzano had a tough childhood and wanted “Alma’s Way” to resonate with young viewers in more difficult circumstances. “In my heart, I’m speaking to the underserved child,” she said.Credit…Caroline Tompkins for The New York Times

The show also includes quintessential Bronx sounds, like salsa, bomba and reggaeton. Bill Sherman composed the salsa-flavored theme song, while its lyrics and rap segment were written by none other than Miranda himself, whom Manzano enlisted.

“New York is a character,” Doherty, who is also an executive producer of “Alma’s Way,” added, “which is something that’s said of a lot of shows, but not often said of kids’ shows.”

Alma — the name means “soul” in Spanish — is closely modeled on Manzano, as was the unflappable Maria, whom she played on “Sesame Street” for 44 years, beginning in 1971. (She was a writer on that show for at least 15 seasons.) Like them, Manzano has Puerto Rican roots, but she grew up in a far less cheerful home than Alma’s. In her 2015 memoir, “Becoming Maria: Love and Chaos in the South Bronx,” she writes of living in poverty with an abusive, alcoholic father who frequently beat her mother.

That little Sonia is voiced by another Bronx Latina: Summer Rose Castillo, a 9-year-old from Throgs Neck who said she identified with Alma. Castillo added, though, that the series is “not just about Puerto Ricans, it’s not just about Latinas; it’s about so many different types of families.”

For Manzano, that meant not only giving Alma playmates who are African American, South Asian and white but also creating friends and family members who are Hispanic in different ways. Alma’s papi, for instance, is Afro-Caribbean, while her Uncle Nestor is Cuban, and a neighbor, Beto, is Mexican American. These distinctions are reflected in the tastes, vocabulary and appearance of the characters, whom the animators at Pipeline Studios, a company near Toronto, portray with varying skin tones.

“Latinos aren’t a monolith,” said Jorge Aguirre, the series’s head writer. “That’s one of the things we get to explore, down to the language, food, music. It’s a great sandbox to be playing in.”

That sandbox is American, too. While Alma refers to her grandfather as Abuelo, she calls Manzano’s character Granny Isa. Manzano deliberately mixed the terminology because, she said, “the culture of this family is both Spanish and English.” In one episode, Isa’s flight from Europe is canceled, and she can’t visit the Riveras. Alma figures out that she can still dance with her ebullient granny through a video connection — a solution that should resonate with pandemic-weary children.

Manzano also invented a character with a disability: Alma’s musically gifted cousin, Eddie Mambo, who has cerebral palsy. The producers relied on medical experts to guide Pipeline in portraying how he moves and adapts. Manzano based him on both her real cousin Eddie, a musician without disabilities, and a boy she knew in her youth who had lost the full use of his legs to polio.

His “boldness in asking girls to dance when his legs were in braces always stayed with me,” she said, emphasizing that the series was as specific in character traits as in visual details.

All this realism serves to help diverse young viewers see themselves, an experience Manzano remembered never having as a small child. It is still rare: According to research conducted by the University of California, Los Angeles, for its annual Hollywood Diversity Report, Latino actors had just 5.6 percent of the major roles in live-action scripted television in the 2017-18 season and 5.8 percent in 2018-19. (Data from the 2020 census indicates that 18.5 percent of Americans identify as Hispanic or Latino.) And while Hispanic characters do exist in animated preschool shows — Nickelodeon’s “Dora the Explorer” and “Santiago of the Seas” come to mind — those series involve fantastical adventures, not dynamics on a Bronx playground.

Even though only a Latino child might immediately know what it means to give up a baseball game for a bomba rehearsal, all children can identify with having to choose between upholding a promise and doing something they prefer.

“The situations that Alma faces are so universal to kids, and they’re real,” Aguirre said, “that I’m hoping that a kid from Cincinnati or a kid from St. Louis will watch the show as well and be like, ‘That’s me.’”

Manzano said she also wanted the series to inspire post-viewing reflection. She cited an episode in which Alma takes a prank too far and hurts Eddie’s feelings.

“People think different things are funny — that’s a nice little sophisticated notion to put in a preschooler’s head,” Manzano said. And if children consider it later, “they’ll come up with things I never thought of. And wouldn’t that be grand?”

On Holocaust Remembrance Day, the U.N. Hears of a Little-Known Killing Field

At Last Back at Sundance, Filled With Rocky Relationships and Glorious Writers

Jay Leno Is Recovering From Surgery After a Motorcycle Accident