As audience members filed into the Park Avenue Armory on Tuesday night, Bill T. Jones was already there, a lone figure on a vast dance floor. Elevated seating, on all four sides of the Drill Hall, overlooked the maw of the stage, where Jones paced and gestured resolutely, as if deep in the thought of movement.

Originally scheduled to open in April 2020, his “Deep Blue Sea” — a nearly two-hour, intermission-less work for himself, the 10 members of Bill T. Jones/Arnie Zane Company, five vocalists and 100 New York City community participants — was finally making its debut. Anticipation ran high, intensified by the hall’s breathtaking scale, outfitted for this occasion by the architect Liz Diller; her firm, Diller Scofidio + Renfro; and the theater projection designer Peter Nigrini, who are jointly credited with “visual environment.” 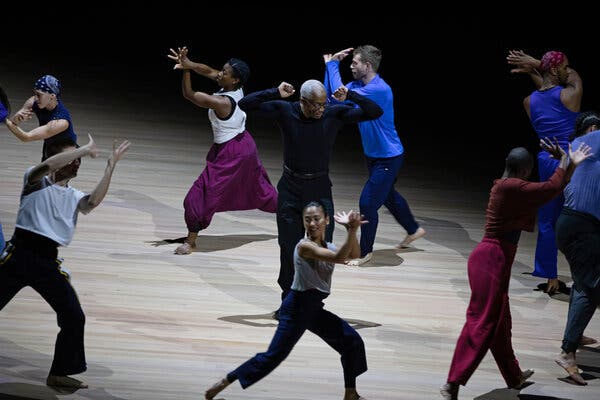 Bill T. Jones, center, with members of his troupe. Credit…Julieta Cervantes for The New York Times

A colossal undertaking, in both its subject matter and the scope of the production, “Deep Blue Sea” takes inspiration from two texts written more than 100 years apart: Melville’s “Moby-Dick” (1851) and the Rev. Dr. Martin Luther King Jr.’s “I Have a Dream” speech (1963). In a hand-scrawled program note thanking both authors, Jones writes to Melville, “Thank you for the ocean just now pretending to be a stage.”

Over an increasingly busy 105 minutes, that space — and it really is oceanic — fills up with a cascade of sometimes powerful, sometimes languishing images and ideas, arising through an agile interplay of movement, light, text and music. (Nick Hallett composed the original, live vocal score, which converses with an electronic soundscape by Hprizm a.k.a. High Priest, Rena Anakwe and Holland Andrews.) Yet while visually and sonically stunning, the many moving parts of “Deep Blue Sea” too often drown out the potency of the dancing itself.

Community participants join in near the end, in a kind of choreographed struggle that evokes recent protests for racial justice.Credit…Julieta Cervantes for The New York Times

If “Moby-Dick” is but a vague memory from high school English, not to worry: Jones is here to give his reading. In the first of many monologues, while still alone onstage, he turns his attention to the character of Pip, whom he describes (mixing Melville’s language with his own) as “the janitor of the ship” and “the brilliant little Black who played a mean tambourine.”

Jones says that when he first read the book, as a Black teenager in rural upstate New York, during the Civil Rights movement, Pip made no impression on him. “Now I even identify with him,” he says. “But at that time, Pip was invisible to me.” Throughout the work, the dexterous use of spotlights (designed by Robert Wierzel) reinforces themes of memory (or amnesia) and invisibility.

As more dancers join in — two, four, until the full company has arrived — the spirit of this newly illuminated character becomes almost a part of the collective. And the work of the dancers, all exquisite technicians, is a thoroughly communal feat, as they slice and scramble through protean formations, let loose in a group reverie or coalesce in almost militant unison. (The choreography is by Jones, Janet Wong and the company.)

More than once, the ensemble pauses in a tableau that resembles the hull of a ship, their shapes mirrored, eerily, by opaque shadows projected on the floor. Extended solos and duets are rare but riveting, in particular the pairing of Barrington Hinds and Marie Lloyd Paspe, who achieve a fierce, friendly tension as they traverse the length of the stage.

In a work heavy with text — passages from “I Have a Dream,” W.E.B. Du Bois’s “The Souls of Black Folk,” Kendrick Lamar’s “Never Catch Me” and other sources — movement can carry the mind to a place of less analyzing, more feeling. But for me, just as that more reflective state approached, language would intrude, as if dance could not be trusted to communicate. An omnipresent narrator, Jones, who was performing with his company for the first time in 15 years, maintained too tight a grip on the proceedings. In one particularly intrusive moment, he held a camera up to each dancer’s face, occasionally asking: “What do you know?”

Company and community members.Credit…Julieta Cervantes for The New York Times

In the final section, the collective grew to include 100 community participants, in a kind of choreographed struggle that poignantly evoked recent protests for racial justice, extending the show’s thematic arc into the present. Then each performer stepped up to a microphone and completed the phrase “I know” with political and personal statements. (“I know that I am loved,” “that freedom is a birthright,” “that America owes Black people reparations.”)

It was a chorus of certainties in what had come to feel like a work uncertain of itself, reaching in too many directions at once.

Through Oct. 9, at the Park Avenue Armory, Manhattan; armoryonpark.org

On Holocaust Remembrance Day, the U.N. Hears of a Little-Known Killing Field

At Last Back at Sundance, Filled With Rocky Relationships and Glorious Writers

Jay Leno Is Recovering From Surgery After a Motorcycle Accident