WASHINGTON — President Biden excoriated Republicans on Monday for blocking his party’s efforts to raise the debt ceiling weeks before a projected government default, calling their tactics “reckless” and “disgraceful” and warning they risked causing “a self-inflicted wound that takes our economy over a cliff.”

Mr. Biden, trying to convey the risks to everyday Americans, warned that they could see the effects as early as this week if Senate Democrats were not able to vote to raise the debt limit. That cap dictates the amount of money the government can borrow to fulfill its financial obligations, including paying Social Security checks, salaries for military personnel and other bills.

“As soon as this week, your savings and your pocketbook could be directly impacted by this Republican stunt,” Mr. Biden said, cautioning that a failed vote could rattle financial markets, sending stock prices lower and interest rates higher. “A meteor is headed for our economy.”

Despite Mr. Biden’s attempts to blame Republicans for the impasse, Democrats are increasingly confronting the possibility that they may need to raise the debt limit through the one legislative path that Republicans have left open: a process known as budget reconciliation that bypasses a Senate filibuster. Mr. Biden and Democratic leaders have chafed at that approach, saying Republicans bear a share of responsibility for Washington’s ongoing budget deficits and must at least allow an up-or-down vote, as has been the case under previous presidents.

Investors in U.S. government debt are already getting spooked: Yields for certain Treasury bonds that could be affected by a default spiked on Monday, as investors demanded higher interest payments to offset the risk.

The Treasury Department has warned the United States will run out of money to pay all its bills by Oct. 18 if the borrowing cap is not raised, a situation that could force the government into default and wreak havoc on an American economy already shaken by the coronavirus.

The dire stakes of the debt limit impasse add a level of seriousness to what has become a perennial exercise of political brinkmanship in Washington. Mr. Biden and congressional Democrats say Republicans are putting the entire economy at risk by blocking a Senate vote that would raise the debt limit with just Democrat support. Republicans, who have allowed such votes to occur in the past, have twice blocked Democrats from taking up a bill and are trying to force the party to use reconciliation, which is a more complicated process that could take a week or more to come together.

On Monday, the president said that he could not guarantee the limit would be raised.

“That’s up to Mitch McConnell,” Mr. Biden said, referencing the senator of Kentucky and minority leader. “I don’t believe it. But can I guarantee it? If I could, I would, but I can’t.”

The president’s remarks escalated a showdown with Mr. McConnell, who on Monday sent a letter to Mr. Biden stating that he would not relent in using the filibuster to prevent a Senate vote and that the onus was on Democrats to find a solution. 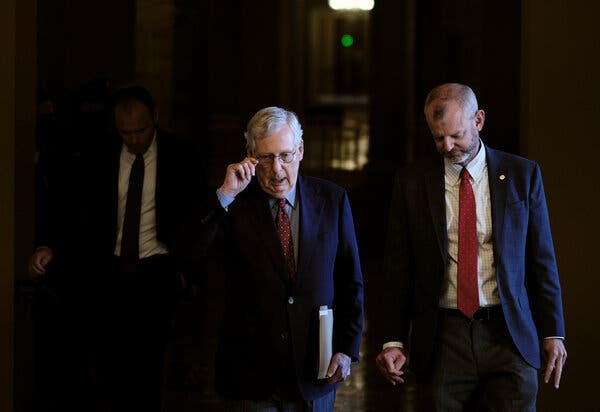 Senator Mitch McConnell, the minority leader, sent a letter to Mr. Biden stating that the onus was on Democrats to find a solution to the debt-limit problem.Credit…T.J. Kirkpatrick for The New York Times

“I respectfully submit that it is time for you to engage directly with congressional Democrats on this matter,” Mr. McConnell wrote in a letter to Mr. Biden. “Your lieutenants in Congress must understand that you do not want your unified Democratic government to sleepwalk toward an avoidable catastrophe when they have had nearly three months’ notice to do their job.”

Democratic leaders in the Senate, along with Mr. Biden, have bristled at Mr. McConnell’s stance, saying Republicans bear responsibility for having approved spending that now requires more government borrowing, and have no right to stand in the way of a Senate vote.

“Why? Why are we doing this?” Senator Richard J. Durbin of Illinois, the No. 2 Senate Democrat, said on Monday. “Because McConnell wants to make a point.”

Senator Jon Tester, Democrat of Montana, visibly frustrated, said the brinkmanship “speaks to how broken this country is.”

“I mean it’s crazy — we’re offering a way to do it, where he doesn’t have to have any members vote for it, and he said that’s not good enough,” Mr. Tester said. “It’s got to be on this piece of legislation or we’re out.”

Senator Chuck Schumer of New York, the majority leader, told Democrats that a bill that would raise the debt limit would need to reach Mr. Biden’s desk within days, not weeks, and threatened to hold members in Washington over the weekend and cancel an upcoming recess to do it.

“Let me be clear about the task ahead of us: We must get a bill to the President’s desk dealing with the debt limit by the end of the week. Period. We do not have the luxury of waiting until Oct. 18,” he wrote in a “dear colleague” letter dated Monday.

Mr. McConnell made clear that the Republican decision to filibuster a vote was driven by politics. He cited the votes Mr. Biden cast against raising the debt limit under former President George W. Bush, which he said “made Republicans do it ourselves.”

“Bipartisanship is not a light switch that Speaker Pelosi and Leader Schumer may flip on to borrow money and flip off to spend it,” Mr. McConnell wrote. “For two and a half months, we have simply warned that since your party wishes to govern alone, it must handle the debt limit alone as well.”

Administration officials and Democratic leaders note a large difference between the votes under Mr. Bush and the ones now: Democrats did not filibuster those votes, allowing Republicans to bring a bill to the floor and raise the limit on their own.

With that avenue in peril, administration officials and congressional leaders are privately sifting through the party’s options if Mr. McConnell does not budge and the vote fails. If that happens, Mr. Biden could face increased pressure to get Mr. Schumer and other party leaders to use budget reconciliation.

The reconciliation process would likely involve two marathons of politically charged votes that could extend for the better part of a day. Democrats say there is no guarantee that Republicans won’t drag those votes out to inflict procedural and political discomfort.

What is the debt limit? The debt limit is a cap on the total amount of money that the federal government is authorized to borrow via U.S. Treasury bills and savings bonds to fulfill its financial obligations. Because the U.S. runs budget deficits, it must borrow huge sums of money to pay its bills.

When will the debt limit be breached? Technically, the U.S. hit its debt limit at the end of July. Treasury Secretary Janet Yellen has been using “extraordinary measures” since then to delay a default. Yellen warned of “catastrophic” consequences if the debt limit isn’t raised before a default, which the Treasury estimates would happen on Oct. 18.

What are those consequences? Ms. Yellen told Congress that inaction could lead to a self-inflicted economic recession and a financial crisis. She also said that Social Security payments could be delayed, soldiers would not know when their paychecks were coming and interest rates on credit cards, car loans and mortgages would rise.

How much debt does the U.S. currently have? The national debt now stands at $28.43 trillion, according to the Peter G. Peterson Foundation’s live tracker. The borrowing cap is set at $28.4 trillion, leaving the government with negligible wiggle room.

Why does the U.S. limit its borrowing? According to the Constitution, Congress must authorize borrowing. The debt limit was instituted in the early 20th century so the Treasury did not need to ask for permission each time it needed to issue bonds to pay bills.

Do other countries do it this way? Denmark also has a debt limit, but it is set so high that raising it is generally not an issue. Most other countries do not. In Poland, public debt cannot exceed 60 percent of gross domestic product.

On Monday, Mr. Biden did not rule out asking Democrats to use reconciliation, but he did not endorse the strategy, either. “It’s fraught with all kinds of potential danger for miscalculation,” he said.

Many Democrats are wary of giving in to Mr. McConnell’s procedural demands, worrying that it would set a bad precedent for future negotiations and give Republicans the opportunity to further delay the vote and risk pushing the government to the point where it does not have enough money to pay all its bills when they are due.

Asked why Mr. Biden has been reluctant to embrace reconciliation, Jen Psaki, the White House press secretary, told reporters that Republicans had “spent like drunken sailors” in the years before Mr. Biden took office and thus had a responsibility allow a vote. “It’s easy to get it done, and we don’t think Republicans should be let off the hook,” she said.

Technically, the United States hit its debt limit at the end of July, following a two-year extension that Congress agreed to in 2019. Treasury Secretary Janet L. Yellen has been using “extraordinary measures” since then to delay a default. Those are essentially fiscal accounting tools that curb certain government investments so that the bills can continue to be paid.

Administration officials say Mr. Biden will continue to pressure Republicans to step aside — by breaking their filibuster — and allow Democrats to vote on their own this week to raise the limit.

“Democrats are willing to do all the work to stop it,” Mr. Biden said. “Republicans just have to let us do our job. Just get out of the way. You don’t want to help save the country? Get out of the way so you don’t destroy it.”

The debt limit debate is another distraction for a president who is trying to ensure passage of two pieces of legislation that will define his domestic agenda. Mr. Biden is attempting to broker a truce between Democrats’ liberal and moderate wings in Congress over a pair of bills that contain nearly all of Mr. Biden’s economic policy proposals, including sweeping new spending on infrastructure, education, child care, home care for older and disabled Americans, affordable housing and more. The president who fashions himself as a deal maker sees himself as uniquely positioned to broker a compromise.

At a Senate Banking Committee hearing on Tuesday, Treasury Secretary Janet Yellen said it would be catastrophic if the United States defaulted on its financial obligations.Credit…Stefani Reynolds for The New York Times

He has pushed centrists to spend as much as $2.3 trillion on the larger bill, offset by tax increases on high earners and businesses, while telling progressives they will need to accept far less than the $3.5 trillion package of spending and tax cuts they initially hoped to pass, which two holdout senators in particular have resisted.

“I’ve been able to close the deal on 99 percent of my party,” Mr. Biden said, Monday before adding that “two people” — a reference to Senator Joe Manchin III of West Virginia and Senator Kyrsten Sinema of Arizona — remain opposed to the second piece of legislation. He has not yet succeeded in persuading them, but his aides say Mr. Biden is patient, and that he is doing whatever he can to keep the negotiations moving in order to keep them alive.

Asked on Monday if he would support a lower figure on the reconciliation package in efforts to appease the two moderate senators, Mr. Biden demurred. “It’s not a smart thing to negotiate with yourself in public,” he said.

FTX Inquiry Expands as Prosecutors Reach Out to Former Executives

Selling Trump Isn’t What It Used to Be