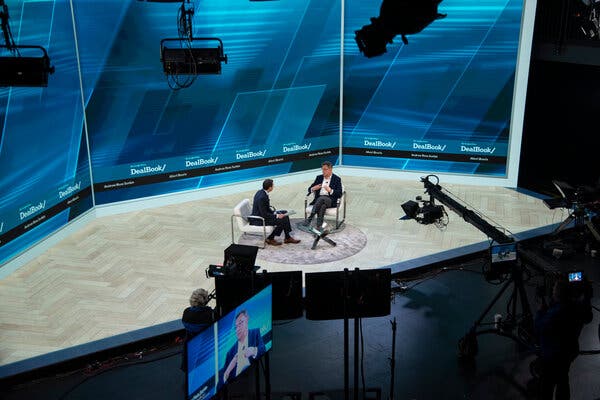 The scene from the summit. Credit…Calla Kessler for The New York Times

America abroad, electric cars and the fight against misinformation

On the second day of the DealBook Online Summit, more top newsmakers in business, policy and culture will take the virtual stage. Here’s the lineup, with one big question we have for each session:

Don’t forget to register to watch the sessions live and submit your questions.

Trade groups join the legal challenges to the federal vaccine mandate. The National Retail Federation and several trucking and distributor associations were among those supporting a federal appeals court’s stay of OSHA’s vaccine rules for large companies. Two law professors argue in The Washington Post that the Biden administration is within its rights to impose a mandate.

Oklahoma’s Supreme Court throws out a big opioid ruling against J.&J. The court invalidated the 2019 decision that required Johnson & Johnson to pay the state $465 million. The move, along with a similar opinion by a California judge, could undercut plaintiffs’ efforts to wring big payouts from opioid industry players.

Google loses its appeal of a $2.8 billion antitrust fine. A court let stand the European Commission’s 2017 penalty against the tech giant for giving preferential treatment to its own price-comparison shopping service. It can still appeal to the E.U.’s highest court.

The Biden administration moves to alleviate the supply-chain crunch. It will spend nearly $8 billion to modernize ports, including construction work by the Army Corps of Engineers and the upgrading of inspection facilities. President Biden also spoke with the leaders of FedEx, Target, UPS and Walmart about how to ease supply bottlenecks.

Rivian prices its I.P.O. at a $70 billion valuation. The electric vehicle maker sold shares at $78 each, above an already increased price range. That huge offering not only makes Rivian’s I.P.O. one of the biggest in years, but also signals investors’ confidence that it will be a leader in the electric car market.

Day 1 at the summit: Tim Cook has crypto, Adam Neumann has regrets

The speakers at the summit made lots of news, and you can catch up on everything in our briefing from the day. Here are some of the highlights:

Tim Cook, Apple’s C.E.O., revealed for the first time that he has invested some of his own money into cryptocurrencies. “I think it’s reasonable to own it as part of a diversified portfolio,” Cook told Andrew, quickly adding that he wasn’t giving investment advice. As for Apple, Cook said the company had “no immediate plans” to either put a portion of its cash in crypto, or to start accepting digital currencies in the App Store. But he added, cryptically, “There are other things that we are definitely looking at.”

Cook also defended Apple’s policy of engaging with China’s government, technology’s effect on mental health, the rumor that Elon Musk once tried to get him to acquire Tesla and more.

Adam Neumann, in his first public interview since his ouster from WeWork in 2019, said, “I have had a lot of time to think, and there have been multiple lessons and multiple regrets.” Neumann, who founded the co-working company, also tried to revise the record about what led to his departure and the company’s subsequent woes.

The things Neumann regrets include believing the hype when bullish bankers said that his company was worth even more than its peak $47 billion valuation: “It went to my head,” he said. The things Neuman thinks others got wrong include that he walked away from the company with a generous golden parachute: “This perception that as the company went from $47 billion valuation down to $9 billion, and I profited somehow while the company is going down, is completely false,” he said.

Neumann also told the story about how Jamie Dimon of JPMorgan Chase helped persuade him to step down from WeWork and explained what he’s doing now with his family investment office (he’s “pretty excited about crypto,” he said).

Meghan, the Duchess of Sussex, said it was time for America to guarantee paid family leave for all workers. She said she had been calling members of Congress to press the issue, which may be part of President Biden’s sweeping climate and social policy spending bill. “It is not just about the mom,” she said. “It takes strong men, modern men, to really understand they benefit from it as well.”

Mellody Hobson of Ariel Investments, who joined Meghan virtually at the summit (pictured above), discussed the limitations of diversity efforts in the workplace. “The No. 1 beneficiary of diversity initiatives in this country has been white women,” Hobson said. “I think the problem is that there is this scenario that is created, and it is a zero-sum game — and it is not.”

“I couldn’t mandate having to vaccinate the younger kids …”

The actor and author Matthew McConaughey may or may not be running for governor of Texas, he said. He isn’t sure he is the person for the job, despite riding high in the polls, but he is examining his “mind, heart and spirit” as he considers it. McConaughey said he knows what he is for and against — opportunities over obligations, choice over legislation and joy over happiness.

He also said he was wary of coronavirus vaccine mandates for children 5 to 11. The actor is vaccinated, as are his wife, mother and older child, but he said he would wait to inoculate his two younger children, who recently became eligible for shots. “I couldn’t mandate having to vaccinate the younger kids,” he said. “I still want to find out more information.” Dr. Vivek Murthy, the U.S. surgeon general, later weighed in, telling CNN that the vaccines are effective and “remarkably safe” for young children.

Albert Bourla, the C.E.O. of Pfizer, said that for a certain share of the population, the push to overcome vaccine hesitancy may never be won. “They are wrong, and I would urge them to get the vaccine,” he said, but “it’s very hard to change their mind.”

That’s why Bourla says he believes that antiviral drugs, like Pfizer’s Paxlovid, could be a “game changer.” Pfizer’s trial data showed that its pill not only reduces deaths but also cuts how many people end up in the hospital. He rebutted criticism that antivirals, which can cost about $700 per treatment, are a more expensive way to combat the coronavirus than vaccines (and therefore more profitable for drug companies). A course of antivirals is still less expensive to health care systems than someone going to the hospital, Bourla said.

“It was not a hard decision …”

Ken Chenault, formerly of American Express, and Ken Frazier, previously of Merck, said their efforts to organize their fellow business leaders against state voting-rights bills was a moral duty. “It was not a hard decision” to take, Chenault said. He called the legislation, which critics said would limit the ability of historically marginalized communities to vote, “a fundamental assault on our democracy.”

But Frazier said the Kens, as they’re known, convinced corporate America that opposing the bills made business sense, too. “Free enterprise is a close cousin of democracy,” he said.

General Electric, for decades the definition of an industrial conglomerate, announced yesterday that it would break itself up into three separate companies that will focus on energy, health care and aviation. As The Times’s Steve Lohr and DealBook’s Michael de la Merced write, it’s a sign that bigger isn’t always better in the business world.

Other industrial conglomerates have slimmed down. In the past few years, Siemens, United Technologies and Honeywell have sold or spun off huge divisions. But conglomerates haven’t fallen out of fashion everywhere: Tech giants like Amazon and Google own a huge array of businesses, though their size — and how they use it — has drawn regulatory scrutiny.

G.E. has already been downsizing, with a succession of C.E.O.s over the years promising to make the company more focused. It has wound down its once-enormous financial arm, which under Jack Welch was the biggest source of its consistently huge profits, and it has divested businesses such as oil and gas equipment and lighting.

Getting smaller isn’t the only solution to G.E.’s problems. Its power business still relies in large part on fossil fuels. Its aviation division has struggled from the pandemic drop in air travel. And its health care business faces stiff competition.