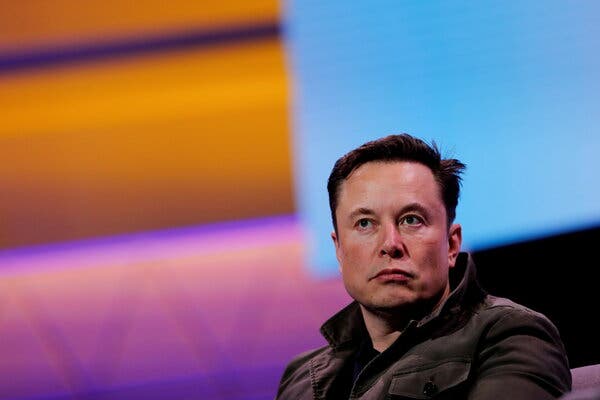 Elon Musk is moving markets with his tweets again.Credit…Mike Blake/Reuters

‘A strange one even for Elon’

Elon Musk appears to have used an impending stock option deadline to make a political point. Over the weekend, the Tesla C.E.O. surveyed his millions of Twitter followers about whether he should sell a chunk of his shares in the electric car company. “Much is made lately of unrealized gains being a means of tax avoidance, so I propose selling 10% of my Tesla stock,” he tweeted, committing to abide by the results of the poll.

The tweet appeared to come in response to what Musk and others think is a problem with a (stalled) Democratic proposal to tax billionaires on their asset holdings. Musk said on Twitter that he doesn’t get a salary, so he would be forced to sell shares if he had to pay any significant taxes. Now, he might sell the stock regardless: When he closed the poll yesterday, nearly 3.5 million votes had been cast, with 58 percent in favor of selling.

Musk may have been prepared to sell a large block of his shares anyway. He holds nearly 23 million stock options that were awarded in 2012. Those options have since vested and will expire in August. Most stock grants allow executives to avoid paying taxes for years, and perhaps forever, as long as they don’t sell the shares they get from converting the options. (Musk has taken out big loans against his shares, allowing him to monetize shares without selling them.) Brian Foley, an executive compensation consultant, says that because of the way they were structured, it’s likely that Musk’s options, if exercised, won’t qualify for the preferential tax treatment. “They are a ticking tax time bomb,” Foley said.

The sale could roil Tesla’s stock at a time when some say it is already overvalued. The company’s market cap recently crossed $1 trillion. Musk owns roughly 17 percent of Tesla’s shares, worth about $200 billion. Some estimate that the tax bill he faces for exercising his soon-to-expire options could be about $15 billion, so following through on his pledge may be more than he needs to pay the tax due.

Musk may have wandered into another thorny disclosure problem. James Cox of Duke University law school noted that the Tesla chief could be sued by investors who say they traded off his tweet if he now doesn’t follow through with his pledge to sell. Musk and Tesla previously settled a lawsuit by the S.E.C. over a tweet saying he had secured money to take the company private; part of that agreement included having Tesla-related tweets vetted by company lawyers.

“This weekend’s Twitter poll was a strange one even for Elon,” said Daniel Ives of Wedbush Securities. The analyst thinks that investor enthusiasm for Tesla’s stock, which has nearly tripled over the past 12 months, would support its shares even if Musk cashed out a chunk of his holdings. Tesla’s shares are down 5 percent in premarket trading.

The Biden administration is set to defend its corporate vaccine mandate. The White House has until 5 p.m. today to respond to the U.S. Court of Appeals for the Fifth Circuit’s stay on its vaccine rules for big employers. The surgeon general, Dr. Vivek Murthy, said the administration is “prepared to defend” the mandate.

Berkshire Hathaway takes a hit from the pandemic and supply chain disruptions. Warren Buffett’s conglomerate reported a steep drop in third-quarter profit, as its vast investment portfolio and its directly managed operations underperformed. But Berkshire bought $7.6 billion of its own shares, reflecting Buffett’s belief that the company is undervalued.

Climate negotiators try to solve a math problem at COP26. As the U.N. climate summit enters its second week, government officials are trying to find new ways to achieve emissions cuts, The Wall Street Journal reports. The problem: Commitments made during COP26 so far don’t come close to helping avoid the worst effects of global warming.

Rivian raises the stakes for its market debut. The electric vehicle maker raised price expectations for its I.P.O., which could value the company at more than $65 billion. That would make Rivian worth nearly as much as Ford — which outfought G.M. to invest in the start-up — when it goes public as soon as this week.

The concert industry reckons with a deadly festival. After eight people died at the Astroworld music event in Houston amid a crowd surge, questions emerged about legal liability, including for the organizer, Live Nation. City officials had expressed concerns about crowd control and the exuberance of fans after the pandemic hiatus.

Deep Nishar, one of the top investors at SoftBank’s $100 billion Vision Fund, is joining the venture capital firm General Catalyst in January, The Times’s Maureen Farrell reports. His departure follows several other senior Vision Fund partners over the past two years, including Jeff Housenbold, Michael Ronen, Colin Fan and Ervin Tu. (Nishar said in September that he would leave SoftBank at the end of the year.)

Nishar was one of the first executives Masa Son hired to rebuild SoftBank in Silicon Valley after scaling back in the U.S. following the dot-com bust. Nishar, one of the Vision Fund’s most senior leaders, stood out as one of the few whose bets paid off as the fund reeled from underperforming investments in WeWork and others. Big hits include his investments in the health care companies Guardant Health and 10x Genomics. Despite announcing his departure, “Masa and I continue to talk every day,” Nishar said in an interview.

At General Catalyst, Nishar will go after big multidisciplinary ideas, including those at the intersection of technology, health care and life sciences, said Hemant Taneja, General Catalyst’s managing partner. Taneja’s attempts to recruit Nishar came over years of long walks around Silicon Valley, even before he joined SoftBank in 2015. Now, he’s got his man.

In other SoftBank news, today the company announced worse-than-expected earnings and said that it would buy back nearly 15 percent of its shares, worth $8.8 billion. Its share price has fallen since its previous buyback program ended in May, and the group has been under pressure from investors to do something about it.

“Everyone’s experiencing this — there’s a war for talent at the front lines. My sense is we all have to raise our game.”

— Jeff Gennette, the C.E.O. of Macy’s, which plans to hire 76,000 full- and part-time employees this holiday season. Anticipating record sales, retailers are trying to hire more seasonal workers than ever, but they are finding it hard to entice people to an industry battered by the pandemic.

► Open borders: The U.S. will reopen to fully vaccinated visitors from previously banned countries today, a move welcomed by airlines and hotel companies. But experts say that high-margin international business travel is not expected to rebound fully until 2024 at the earliest.

► More from the Facebook whistle-blower: The former Facebook product manager Frances Haugen will appear before the European Parliament today. Haugen has already testified before the U.S. Senate, making a case for more oversight of the social media giant, which recently changed its name to Meta. Her statements intensified calls in Europe for new regulations aimed at the Silicon Valley giantss.

► Measuring inflation: On Wednesday, the government will report how much prices rose in October. The Consumer Price Index jumped more than expected in September, denting many people’s confidence in the economy.

How to spend it

Late Friday night, the House passed a $1 trillion dollar infrastructure bill on a vote of 228 to 206, winning the support of all but six Democrats as well as 13 Republicans. The legislation, which cleared the Senate in August, authorizes $550 billion in additional spending and renews some existing programs. It is the largest public works bill since President Dwight D. Eisenhower created the Interstate System.

Passage in the House overcame Democratic infighting that pitted a clutch of moderates against a bigger group of progressives. A compromise plan, hatched by the Congressional Black Caucus, called for the infrastructure bill to pass immediately along with a procedural vote to tee up a $1.85 trillion social policy and climate bill for passage soon. The Democrats’ liberal wing wanted simultaneous approval of both bills.

President Biden called the infrastructure bill’s passage a “monumental step forward.” Representative Alexandria Ocasio-Cortez of New York, one of the Democrats who voted against it, said that “we must keep going and ensure the promises are delivered.”

What happens next: Democrats will pivot to pitching the merits of the social policy bill, which faces more united Republican opposition and wariness among moderate Democrats over its cost. Congress is back from a weeklong recess on Nov. 15 and is expected to take up the bill then, with an independent assessment of its cost determining its fate, or whether it will be scaled back. (In other words, the intraparty brawl is far from over.)

And as The Times’s David Sanger notes, there is a third element of Biden’s economic revival effort: The so-called China bill includes more than $50 billion in investments in semiconductors, A.I., quantum computing and more, mirroring an initiative announced by Beijing. It has already passed the Senate by a strong bipartisan majority, a testament to how competing with China is one of the few issues that brings Republicans and Democrats together these days. When asked over the weekend, Biden declined to say when it would come up in the House.