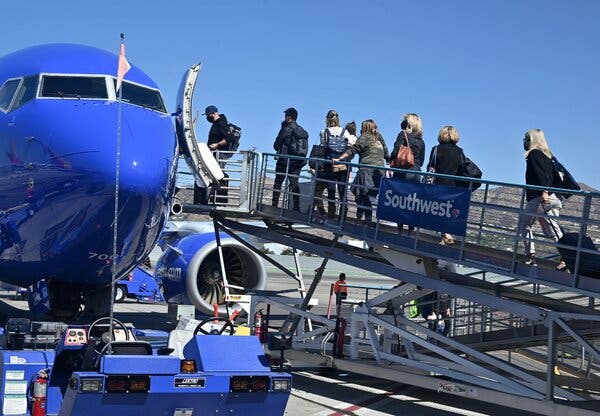 Southwest Airlines canceled more than 1,000 flights yesterday, and just over 800 on Saturday, wreaking havoc on weekend travel plans for thousands of passengers. The cancellations accounted for around a quarter of the airline’s scheduled flights this weekend.

Since other airlines weren’t affected, the cancellations invited speculation about a link to a court challenge Friday by Southwest’s pilots union to the company’s vaccine mandate. Texas-based Southwest and the union denied any link between the cancellations and the mandate, but it is telling, regardless, that many immediately drew the connection. The union had warned that enforcing the mandate could lead to labor shortages and service disruptions, an argument that is likely to play out elsewhere as vaccination deadlines loom.

Southwest blamed weather, limited capacity and air traffic control issues for the cancellations. Although the disruption appeared limited to Southwest, it and others have had similar breakdowns before, as the airline reporter David Slotnick detailed on Twitter.

On Friday, Southwest’s pilots union asked a judge to block the company’s vaccine mandate, saying in a legal filing that it “unlawfully imposes new conditions of employment” that had not been negotiated with the union. The company said this month that its workers must be vaccinated against the coronavirus by Dec. 8 to meet rules for federal contractors. Several unions, including those at AT&T, Disney and Tyson Foods, ultimately supported vaccine mandates, after negotiating the terms of the requirements, while pushing for more benefits and protections in the process.

Pandemic bailouts of airlines add a layer of political complexity. Representative Chip Roy, Republican of Texas, said yesterday that he was “working on legislation to require all companies that took bailouts to have to pay them back — in full — if they fire any employee for lack of vax.” Last month, Gov. Greg Abbott of Texas said that the state was “working to halt this power grab.”

Shortages and disruptions are an increasingly popular talking point for opponents of mandates. Senator Ted Cruz, another Texas Republican, criticized vaccine mandates along these lines this weekend, pointing to Southwest’s problems. While corporate vaccine mandates have largely proven effective at upping inoculation rates significantly, the risk of being forced to fire employees is a concern for companies in industries facing labor shortages, like airlines.

But some employers say that mandates have served as a useful recruiting tool. United Airlines, which was among the first big companies to announce a vaccine requirement, said that it is receiving a much higher ratio of applications per position than before the pandemic.

The Nobel Prize in economics goes to a trio for their work on unintended experiments. David Card, Joshua Angrist and Guido Imbens were praised by the judges for their study of chance events and policy changes. Card’s work on the labor market showed how increasing the minimum wage does not necessarily lead to fewer jobs, while Angrist and Imbens refined the methodologies that researchers now rely on when analyzing natural experiments.

Merck applies for emergency approval of its Covid pill. The pharma company is asking the F.D.A. for authorization of the drug, molnupiravir, for high-risk adults sick with Covid. If approved, it would mark a milestone in the fight against the coronavirus, because the pill could reach many more people than the antibody treatments currently being used.

Moderna ships almost all of its Covid vaccine doses to rich nations. An investigation by The Times also found that Moderna is charging poorer nations, like Thailand and Colombia, more money per dose than the U.S. and E.U. Under pressure from the Biden administration, Moderna said that it would ship one billion doses to poorer nations next year.

James Bond draws viewers back to the big screens. “No Time to Die” brought in $56 million in its opening weekend in North America, which was less than previous Bond releases, but still one of the best opening weekends in the past year.

The I.M.F. chief’s fate remains in limbo. The institution’s board, which met multiple times last week, remains split on whether Kristalina Georgieva should be forced to leave. (It meets again today.) She is accused of overseeing the manipulation of data in a 2018 report to favor China when she was at the World Bank.

Henry Kravis and George Roberts, the private equity titans who founded K.K.R., are handing over the keys. They founded K.K.R. with Jerome Kohlberg Jr. in 1976 and defined the 1980s leverage buyout boom with the firm’s acquisition of RJR Nabisco.

Joe Bae and Scott Nuttall are taking over as co-C.E.O.s, effective immediately, the firm announced today. Kravis and Roberts will remain “actively involved” as executive co-chairmen of the board.

The succession plan was set in motion in 2017, when K.K.R named Bae and Nutall co-presidents and C.O.O.s. Both joined the firm in 1996. Bae helped oversee its expansion in Asia and its private markets business, while Nutall guided the firm’s 2010 I.P.O. and its public markets business.

Kravis and Roberts are also ceding voting control. Alongside the management moves, K.K.R. is simplifying its corporate governance and will eliminate preferred shares for Kravis and Roberts, moving to one-vote-per-share on all matters — including board elections — by the end of 2026. That is in contrast to rivals like Blackstone, where founder Steve Schwarzman maintains significant control. Apollo said earlier this year that it would move to a one-share-one-vote structure after revelations about its founder Leon Black’s ties to Jeffrey Epstein, which led Black to step down earlier than expected.

Other leadership transitions are afoot at buyout groups. Carlyle’s co-founders, David Rubenstein and William Conway, appointed Glenn Youngkin and Kewsong Lee as co-C.E.O.s in 2017. (Youngkin resigned last year and is running for governor of Virginia.) Blackstone’s Schwarzman is still at the helm, with heir apparent Jonathan Gray serving as the firm’s C.O.O. TPG has been reshuffling its ranks in advance of an expected I.P.O.

“The supply chain is overwhelmed and inundated. It’s not sustainable at this point. Everything is out of whack.”

— Griff Lynch, the executive director of the Georgia Ports Authority, on the traffic jam at the Port of Savannah, a result of larger supply chain problems that show no signs of relenting.

Evergrande, the teetering Chinese property developer, has three more payments due today on its dollar bonds. It’s been about two weeks since the company, which has $300 billion in liabilities, missed a Sept. 23 bond payment, starting the clock on the 30-day grace period before it formally defaults.

Cracks are beginning to appear across China’s real estate industry. Developers have amassed more than $5 trillion (with a “T”) in debt, and buyers are wary of high prices, denting sales and forcing sellers to cut prices. Evergrande isn’t the only developer struggling with its debts; collectively, Chinese real estate companies have more than $28 billion in dollar bond payments due in 2022.

Evergrande’s international creditors are beginning to make noise, amid fears that China will prioritize onshore creditors in any potential restructuring. Last week, Moelis and Kirkland & Ellis, the advisers representing a number of offshore bondholders, said they were concerned about a lack of information from China, including details about Evergrande’s potential sale of a stake in one of its divisions. (Trading in the company’s shares has been halted since Oct. 4.)

Creditors also questioned whether a deal announced by Evergrande last month to sell a $1.5 billion stake in a bank to help settle debts amounted to preferential treatment that kept offshore creditors out of the loop. Creditors are looking for recourse in Cayman law, which governs Evergrande’s offshore bonds, according to Bloomberg. On Saturday, Evergrande said it had punished six executives who redeemed company investment products early, forcing them to return the funds.

► Price check: The government on Wednesday will report how much prices rose in September. The Consumer Price Index rose in August at its fastest pace in 30 years. Economists and White House officials still expect the pandemic-driven spike in inflation to be temporary, but fears that it could drag on could complicate the Fed’s policies and the Biden administration’s spending efforts.

► I.M.F. and World Bank meeting: Finance ministers and central bank governors have plenty of problems to discuss at their weeklong gathering: the pandemic, climate change and inequality are all on the agenda. Finance ministers from the Group of 20 nations are also set to meet to discuss how to sustain the economic recovery, and to endorse a 15 percent global minimum corporate tax.

► Booster shots: Advisers to the F.D.A. will meet on Thursday to discuss emergency authorization of booster shots for people who received the Moderna and Johnson & Johnson coronavirus vaccines. A separate meeting on the use of the Pfizer-BioNTech coronavirus vaccine for children ages 5 to 11 is tentatively scheduled for Oct. 26. The F.D.A. typically issues decisions within a few days of its advisory committee’s meetings.

From the TimesMachine: 90 years ago this week, the inventor John Logie Baird, known as the “father of television,” made his first visit to the U.S., to expand his company’s offices and ramp up production of TV sets. Baird said there were already around 8,000 working sets in England and he hoped to manufacture one million a year in America, at a cost of $25 each.