Mike Pence told her, “I love your heart.”

Representative Jim Jordan of Ohio confided in her that Donald J. Trump would soon announce he was running again for president in 2024.

Glenn Youngkin, the Republican nominee for governor of Virginia, revealed to her that he could not publicly press his anti-abortion agenda for fear of losing independent voters.

All of them made these comments to Lauren Windsor, a liberal activist who has turned a hidden camera, a Tennessee drawl and a knack for disarming her targets with words of sympathetic conservatism into a loaded political weapon.

Posing as a true believer — in Mr. Trump or a stolen 2020 election — Ms. Windsor approaches Republican leaders at party gatherings and tries to coax them into revealing things that they might wish to keep in the G.O.P. family.

Since late last year, as she has traveled widely around the country, several of her recordings have generated headlines.

Her encounter in December 2020 with Tommy Tuberville, then a senator-elect from Alabama, elicited the first real evidence that some Republicans in the Senate would reject the Electoral College votes certifying Mr. Biden’s victory, a move based on groundless claims of fraud. “We’re going to have to do it in the Senate,” Mr. Tuberville told Ms. Windsor after a speech, as an aide hustled him away.

“More Republicans should follow his lead,” Mr. Trump tweeted after the recording was uploaded. Eight G.O.P. senators including Mr. Tuberville ended up voting on Jan. 6 to overturn the election results, even after rioters stormed the Capitol that day.

Ms. Windsor, 40, calls herself an “advocacy journalist,” though her methods fall beyond the pale of mainstream journalism, where reporters generally shy away from assuming false identities and secretly recording conversations.

She says her stings are justified by Republicans’ efforts to spread disinformation about the election and to weaken the nation’s democratic underpinnings through restrictive new voting laws and measures taking greater control over how elections are run.

“Extraordinary times call for extraordinary measures,” she said in an interview. Assuming a false identity, she argued, can produce a truer record of a politician’s views. “Acting like you’re one of them — you’re going to elicit different answers than if you have a reporter in somebody’s face and they know you’re a journalist.”

While Ms. Windsor’s videos are often picked up by left-leaning news outlets, the political impact of them can be limited. Some of her Republican targets dismiss her videos as nothing they haven’t said before, in so many words.

The bait she dangles to draw out a response can be highly tendentious. “This is a Christian state, and Democrats are not Christian,” she told a cowboy-hatted Texas legislator in the Capitol in Austin.

Claiming to have been at the United States Capitol on Jan. 6, she challenged Mr. Pence about why he didn’t “stop the election from being stolen.” The former vice president didn’t bite: “Read the Constitution,” he said, before offering parting praise of her “heart.”

A spokesman for Mr. Youngkin, the Republican candidate for governor in Virginia, denied he had said anything privately that he had not uttered publicly, even though he told Ms. Windsor that he had to be discreet about his anti-abortion views. “When I’m governor and I have a majority in the House, we can start going on offense,” he said to her in their encounter. “But as a campaign topic, sadly, that in fact won’t win my independent votes that I have to get.”

Her practices have drawn inevitable comparisons to the right-wing gotcha squad Project Veritas, but she says there are crucial differences.

While Project Veritas has embedded moles in left-leaning groups and Democratic campaigns, Ms. Windsor says she avoids such methods.

She makes her undercover recordings at public events in brief encounters. She usually uploads the full interaction to her YouTube page, The Undercurrent, or in segments on Twitter (which limits a video’s length).

Ms. Windsor also has a personal back story with Project Veritas — which is led by the conservative activist James O’Keefe — that hangs over her career. 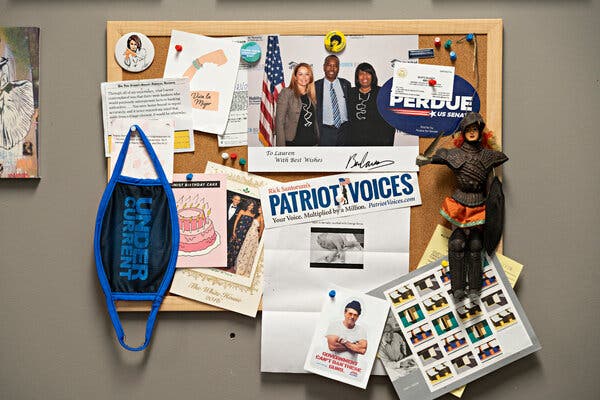 Ms. Windsor says that her methods differ from those of the conservative group Project Veritas.Credit…Melissa Lyttle for The New York Times

A dozen years ago, she uploaded sympathetic reports of Occupy encampments. In 2012, she sneaked into a retreat of Republican members of Congress in Baltimore. Hearing of her exploit, Robert Creamer, a longtime progressive strategist, offered to advance her career. He and another strategist, Mike Lux, a media specialist, who together were founders of the consulting firm Democracy Partners, became “mentors” to Ms. Windsor, she said.

Two years later, operatives for Project Veritas infiltrated Democracy Partners, which was working to elect Hillary Clinton. Edited videos posted by Project Veritas showed a subcontractor for Mr. Creamer discussing potential ways to incite violence at Trump rallies. The videos embarrassed the Clinton campaign, and Mr. Creamer stepped back from the race in its final weeks.

Ms. Windsor described Democracy Partners, where she has since become a partner, as the equivalent of family, and the undercover operation by Project Veritas as a personal blow.

“The infiltration of our office felt like a very deep wound,” she said.

In response, she created Project Veritas Exposed, a website that uploads pictures and dossiers of individuals purported to have worked undercover for Mr. O’Keefe. In 2018, the campaign of Abigail Spanberger, now a Virginia congresswoman, fired a volunteer after finding her on Project Veritas Exposed and confronting her.

More recently, Ms. Windsor provided a document to reporters at The New York Times about a planned operation in 2018 involving Project Veritas operatives. Further reporting revealed that the operation was aimed at H.R. McMaster, Mr. Trump’s national security adviser at the time, who had fallen out of favor with Trump supporters. (Project Veritas has sued The Times for libel over a separate matter.)

Ms. Windsor rejected any notion that her undercover work was a form of revenge after the infiltration of her mentors’ company in 2016.

“In terms of the undercover work I’m presently doing, it has nothing to do with O’Keefe and everything to do with the fact that extremist right-wingers are trying to overthrow our democracy,” she said.

Asked for comment, Mr. O’Keefe accused Ms. Windsor of selectively editing her videos, including an encounter Ms. Windsor and a colleague had with a Project Veritas operative who infiltrated Democracy Partners. (The episode predated her current series of undercover encounters with Republicans.) Mr. O’Keefe said that his group’s “reporting and our record speaks for itself,” and argued that Ms. Windsor had “lackluster ethics.” Democracy Partners has sued Project Veritas over its infiltration of the liberal group, and that litigation is ongoing.

In some ways, Ms. Windsor’s stings echo those of perhaps the leading practitioner of stunts meant to deceive Republicans, the comedian Sacha Baron Cohen, who targeted figures including Mr. Pence and Rudolph W. Giuliani for his 2020 movie “Borat Subsequent Moviefilm.” But Mr. Cohen largely carries out his antics for entertainment and shock value, whereas Ms. Windsor sees herself as a more serious political player.

Her current work is funded by a small nonprofit progressive group, American Family Voices, which pursues activities “that more traditional D.C. groups weren’t able or willing” to do, according to its website.

Leo Hindery Jr., a director of American Family Voices and a businessman who once led the YES Network, defended Ms. Windsor’s masquerading as a conservative to dupe Republicans, as she did with Mr. Youngkin, the Virginia candidate for governor, whose statements about abortion were used in an attack ad by his Democratic opponent, Terry McAuliffe.

“Youngkin’s views on abortion are fair game in my opinion,” Mr. Hindery said. “Just because the person standing across from him he thinks is a great conservative ally — it’s his views that are news.”

Glenn Youngkin, the Republican nominee for governor of Virginia, told Ms. Windsor that he could not publicly press his anti-abortion agenda for fear of losing independent voters.Credit…Melissa Lyttle for The New York Times

Ms. Windsor is cagey about some of her methods. She usually works with a male confederate. Though she is sometimes nervous, she said, adrenaline fuels her. “It’s exhilarating being in the arena in a battle of wits,” she said.

An Arkansas native who was raised near Nashville, Ms. Windsor in her encounters dials up her Southern accent and postures as a wide-eyed conservative, sometimes in a MAGA hat. It encourages politicians to “mansplain” to her, she said.

On occasion, they seem to get over their skis. Mr. Jordan, the Ohio congressman, confided at a Republican event in Iowa in early September that he had spoken to Mr. Trump the day before and that the former president was “about ready to announce” a 2024 campaign. Mr. Jordan’s office walked back the comment.

Senator Ron Johnson of Wisconsin, who has sown doubts about whether Mr. Biden won fairly,told Ms. Windsor that “there’s nothing obviously skewed about the results” of the 2020 election, undercutting Mr. Trump’s false arguments that voter fraud caused his defeat.

In a statement, Mr. Johnson said that there were “many irregularities” in the Wisconsin election, but that he had acknowledged Mr. Biden’s victory since the Electoral College met in December. “This supposed undercover recording by a Democrat political operative at a public event is consistent with what I’ve been saying publicly on the 2020 election,” the senator said. “No need for hidden cameras and secret recordings.”

FTX Inquiry Expands as Prosecutors Reach Out to Former Executives

Selling Trump Isn’t What It Used to Be