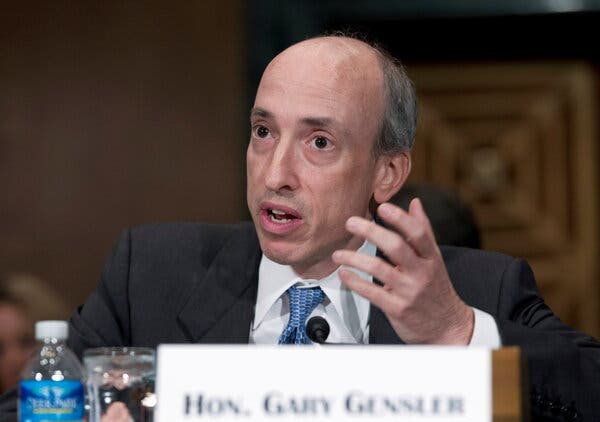 Gary Gensler wants to tighten up the rules for SPACs.Credit…Jose Luis Magaua/Reuters

The S.E.C. homes in on key SPAC features

The S.E.C.’s chair, Gary Gensler, has made clear for months that he is worried about the risks faced by investors in special purpose acquisition companies, which over the past two years have become a hugely popular way to take businesses public. In a speech yesterday, he elaborated on one of the S.E.C.’s main focuses in reducing those risks — with measures that could shake up the industry.

Financial projections come to the fore. Gensler noted that SPACs are allowed to pitch potential investors using forward-looking business data that isn’t allowed in I.P.O.s. That loophole, he said, allows the financiers behind these funds to release rosy-looking numbers that mask the underlying health of the business they’re taking public. (The S.E.C. has been looking into disclosure issues in SPAC deals involving the likes of Nikola and Lucid.)

A question of liability. Gensler also suggested that the people behind SPACs, including their sponsors, financial advisers and accountants, should be held more accountable for their due diligence on the companies these funds acquire, much as underwriters of I.P.O.s are. “Make no mistake: When it comes to liability, SPACs do not provide a ‘free pass’ for gatekeepers,” he said in his speech.

The goal is to even out the playing field between SPACs and I.P.O.s. While deal makers have expected financial regulators to tighten the rules governing blank-check funds, amid an explosion in their popularity and the underperformance of many companies that have used them to go public, Gensler’s comments shed further light on what that might look like.

Beijing says it has ruled out a bailout for Evergrande. Statements from Chinese regulators were meant to suggest that they would not rescue the embattled real estate developer from default, but would aim to limit the damage to China’s broader financial system. Still, Chinese stocks fell as investors awaited Evergrande’s restructuring plans.

The Senate approves a fast-track way to avoid a U.S. default. Fourteen Republicans joined Democrats in passing a bill that would allow the debt ceiling to be raised by a simple majority vote. It ends a monthslong G.O.P. blockade and lets the Biden administration avoid a first-ever U.S. default.

Volkswagen’s C.E.O. hangs onto his job. Herbert Diess won renewed support from the German automaker’s supervisory board, amid growing investor dissatisfaction with his leadership and the company’s financial performance. But Diess will lose some of his responsibilities to a lieutenant, Ralf Brandstätter.

New pandemic restrictions will test British companies. As the U.K. braces for a wave of Omicron variant cases, the nation’s businesses are grappling with renewed mask mandates and calls for employees to work from home. The new rules are expected to face stiff opposition from members of Britain’s ruling Conservative Aarty.

A star environmental lawyer is released from prison. Steve Donziger, who took on Chevron in court over pollution in Ecuador but was found guilty of criminal contempt, won early release under a pandemic-era program. He will serve out his remaining 136 days at home.

Economists and investors are eagerly awaiting this morning’s release of the latest government inflation data. Estimates suggest that the Consumer Price Index jumped nearly 7 percent in the past year, the biggest annual rise in nearly four decades.

As the jobs market shows steady, if uneven, growth, the surprise rise in prices has become this economic cycle’s X factor — and its consequences for things like wages are becoming more apparent, and more complicated.

Growing inflation isn’t always bad. Rising prices are most closely associated with everyday things like food, gas and rent. But paychecks grow during inflationary periods as well. And when wages rise — particularly for lower and middle-wage workers — that is often considered good for the economy, since those earners tend to spend much of what they take home.

At first, wage inflation dominated. Last year, the average wage of all hourly workers grew 5.5 percent, the largest increase since at least 2006, while consumer prices were up just 1.3 percent.

But prices have since caught up, and then some. While paychecks are on track to rise another 5 percent this year, real wages — a way to measure what people can actually buy with their earnings — fell 2 percent. And companies aren’t necessarily planning to help employees cope: Google executives recently told workers that they won’t broadly adjust compensation to keep up with inflation, CNBC reports.

Employees may eventually regain some benefits from inflation, as supply-chain shortages that helped drive up prices ease, according to Josh Bivens, the director of research at the Economic Policy Institute. “We have gotten a lot of jobs back,” Bivens told DealBook. By next year, he says, “we will have the good parts of the employment market still working, and the bad parts of the supply chain worked out.”

The numbers behind a Starbucks union vote

A Buffalo-area Starbucks store yesterday became the only current U.S. location in the coffee chain with a unionized staff, after a majority of workers there voted to organize despite opposition from executives. But it’s worth keeping a few stats in mind about what that represents.

Opinions are split on the importance of the vote:

“There is light rain falling across the Southland this morning, expected to get just a little bit heavier as the jay — day — progresses.”

— Bob Iger, substitute weatherman and outgoing chairman of Disney, filling in during a KABC news broadcast yesterday. Iger began his career as a weatherman before pivoting to media moguldom.

Delaware’s Supreme Court this week affirmed a decision that shook up deal-making over the last year, a ruling that cast a spotlight on the oft-unnoticed clause about the “ordinary course of business” in M.&A. contracts.

The case revolves around a hotel deal struck in 2019. Mirae Asset Financial Group of South Korea agreed to buy 15 hotels from an affiliate of China’s Anbang Insurance Group for $5.8 billion. The transaction’s close was delayed until the spring of 2020 — and by that time the pandemic clearly promised disaster for the travel industry. Mirae sued to get out of the deal, arguing that Anbang’s response to the pandemic violated a requirement that it keep operating the hotels “in the ordinary course of business,” and notify Mirae if it wanted to make any big changes.

When legalese truly becomes important. “Ordinary course” provisions of deal contracts rarely come under scrutiny, and have rarely been used as ejector seats by reluctant buyers. But Mirae leaned on the clause here, asserting that Anbang closed hotels and reduced services and staff without consulting it. (Anbang’s lawyers argued that it was merely doing what others in the industry, including Mirae, had been doing.)

Expect “ordinary course” clauses to receive more scrutiny. The case’s resolution “is not about the pandemic,” said Jill Fisch of the University of Pennsylvania, but about a strict reading of deal terms. Other pandemic-era efforts to invoke “ordinary course” provisions to get out of deals, including LVMH’s aborted attempt to end its takeover of Tiffany & Company, didn’t get this far. But experts say deal lawyers will pay more attention now: “This ends up setting the standard for how people negotiate big M.&.A. deals,” said Afra Afsharipour of the University of California, Davis.

To Get the Most From Social Security, Log On