There’s the high-tech poultry barn, where an automated system ensures that wobbly week-old chickens get just the right amount of light, heat, ventilation and food. There’s the 10-foot-long steel barrel washer, which gently buffs a pile of freshly dug Lehigh potatoes, and the acre of Bolero carrots now emerging from dark topsoil that took Mr. Tomlinson nearly half a decade to restore.

Mr. Tomlinson, 40, loves those carrots, which are sweetened by fall frost, stay crunchy in cold storage and grow to a perfect size for his customers’ mirepoix. “It’s all about consistency in the kitchen, so the chefs don’t have to work too hard,” he said.

Carversville Farm looks like so many others that cater to picky chefs. But Mr. Tomlinson’s customers don’t work at restaurants: They work at soup kitchens and food pantries throughout the Philadelphia area, and they get every bit of that impeccably grown food free. 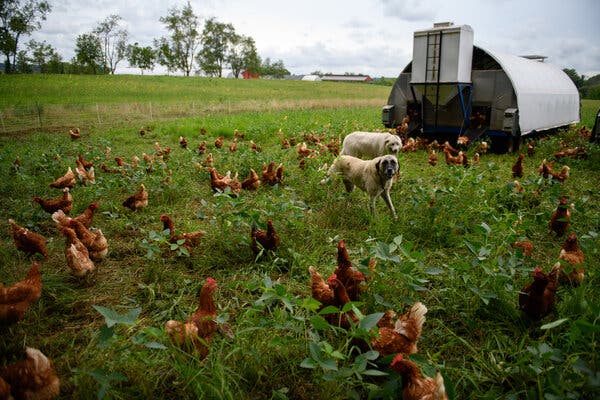 Natasha and Thor patrolling the hens, which collectively lay more than 1,200 organic eggs a day in their high-end mobile chicken houses. Credit…Kriston Jae Bethel for The New York Times

The nonprofit farm, formally called the Carversville Farm Foundation, was started seven years ago by Tony and Amy D’Orazio, a husband-and-wife team of entrepreneurs. The farm, which includes a lazily grazing herd of Angus cattle and a rafter of Bourbon Red turkeys, donates 90 percent of its produce and meat. (The other 10 percent — Mr. Tomlinson tracks it by weight — goes to a stand, open once a week, that neighbors begged the foundation to run.)

Plenty of farms give food away. And since the start of the coronavirus pandemic, federal and state programs have even begun paying them to do so. The newly created Pennsylvania Agricultural Surplus System, for instance, helps steer food that would otherwise go unused to state residents at risk of hunger. But Carversville Farm functions more like a dedicated supplier for chefs at half a dozen emergency food providers, all of whom collaborate with the farm in deciding which crops to grow.

Instead of waiting for donations, nonprofit providers get to order what they want each week. Those orders are professionally processed, packed and delivered to their doors by a dedicated team of 17 that includes two former animal husbandry experts from the Stone Barns Center for Food and Agriculture in Pocantico Hills, N.Y.; a former rooftop gardener for a restaurant run by the chef Tom Colicchio; and Mr. Tomlinson, who was the vegetable farmer for Agricola restaurant in Princeton, N.J.

Carversville Farm Foundation is funded almost entirely by the D’Orazios, who have for 32 years operated Vertical Screen, a Bucks County business that conducts background screenings of job applicants for companies.

The couple used to do what lots of philanthropic owners of successful businesses do: They wrote big checks and volunteered their time. Now those efforts go into the farm and the foundation, where they are co-executive directors.

Mr. D’Orazio, 60, who grew up in South Philadelphia, says the first seeds for the farm were planted in the 1980s, while he and his wife were attending college in the city. That’s when they first recognized the extent of poverty in Philadelphia, where according to the City Council, 24.5 percent of the population still has an income below the poverty level — the highest percentage of any large city in the United States.

They bought most of the land and started the foundation in 2013, after city officials didn’t show up to a meeting Mr. D’Orazio spent hours arranging on behalf of a local nonprofit. “I’m not sure this is the best use of my time,” he recalled telling his wife. “Let’s think about doing something more direct.”

A farm that would donate what it grew seemed obvious: Mr. D’Orazio had already volunteered at soup kitchens and added a community garden to the LEED-certified campus he built for Vertical Screen, where he is still the chief executive. (Ms. D’Orazio is a vice president.)

Chickens at the farm are air-chilled; the result is crispier skin and better texture.Credit…Kriston Jae Bethel for The New York Times

The couple studied soup kitchens, which can struggle to manage donations and often use up what small budgets they have on the lowest-priced produce and proteins. They also discovered that organizations with missions similar to the one they were pursuing made it a point to treat those they served with dignity — a term gaining traction among those who work in emergency food.

“I don’t believe it’s like, ‘Hey, I got money, I can eat and I can eat well and choose what I want to eat, and everyone else just gets the $1 menu at McDonald’s,’” Mr. D’Orazio said.

The foundation now centers on that concept of dignity, as do the nonprofits it supports. At Face to Face, a community center in the Germantown neighborhood of Philadelphia, they serve hot from-scratch food in a formal dining room, with tablecloths and help from volunteer servers, five days a week. They used melamine plates and silverware before switching to disposables during the pandemic.

One recent Saturday, Winifred Lenoir-Jones came by for barbecued organic chicken, roasted red potatoes, sweet corn on the cob and cucumber-cherry tomato salad. Ms. Lenoir-Jones, who is 90, has been coming to Face to Face for years.

Mary Kay Meeks-Hank, the executive director of Face to Face, said Carversville Farm had arrived at a time when the chef there was already trying to rid his kitchen of canned food and embrace more flavorful cooking. The center’s relationship with the foundation — which also supplies a market stand outside the center and plant starts for their community garden — makes that financially possible.

Ms. Meeks-Hank recalled the day the D’Orazios first came by, to offer what she assumed was just another donation of surplus food. “Not to be cynical, but I thought, ‘Oh yeah, great.’ I had no idea — I had no imagination — for what it could become,” she said.

Carversville Farm also delivers to Cathedral Kitchen, a nonprofit food provider in nearby Camden, N.J. “Now we can do a restaurant-quality meal,” said John Peralta, a chef there. “We can have garlic scapes and fresh turmeric and different colors of cauliflower — which makes the plate so much nicer.” Mr. Peralta once ordered a whole side of Angus beef to teach butchery in Cathedral Kitchen’s culinary training program.

For Laure Biron, the executive director of Broad Street Ministry in Philadelphia, the high quality of the food she gets now is the ultimate expression of her organization’s mission. Serving a delicious meal creates trust, Ms. Biron said, and that can become an entry point to all of the other social services the ministry offers. “Food is the most critical resource that we’ve got,” she said.

These organizations are the reason the D’Orazios have invested so much in infrastructure for the farm, though it might seem like overkill to an observer. “That’s the level we want to provide — that there’s no stress that the food is going to run out,” Mr. D’Orazio said.

He wants the farm to be efficient and self-sustaining, and from his perspective, that includes breeding animals, saving seeds, taking care of the land and training apprentices. (They currently have seven, who live in a large 18th-century house on the farm.)

The foundation spends about $1.5 million per year to run the farm, Mr. D’Orazio said. The D’Orazios plan to fund an endowment to support the foundation, and are working on a succession plan with their two adult children.

Mr. D’Orazio realizes that one farm alone is unlikely to solve the complicated problems of hunger and poverty in the region, but at this stage in his life, he says, he has felt moved to do something different than what’s been done before.

The idea that people still starve in Philadelphia is just unacceptable, he said. “We’re just trying to do one little thing.” 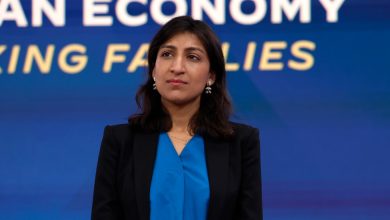