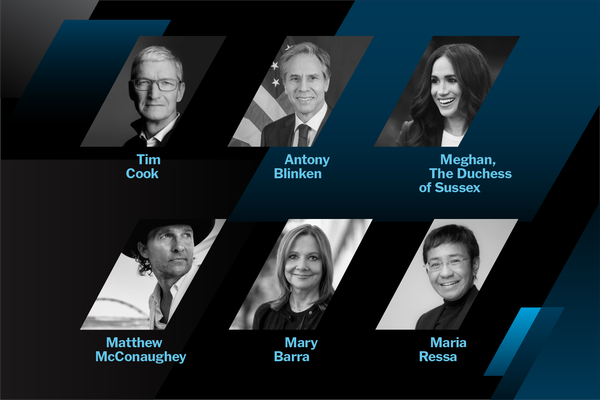 The future of the internet, achieving equality and life after the pandemic

Today is the first day of the DealBook Online Summit, with a packed lineup of newsmakers in the worlds of policy, business and culture. Andrew will interview them about the pressing issues of the day, from how tech giants balance innovation and privacy to the role business plays in creating opportunities for underrepresented groups and the next steps in the global vaccine campaign.

Here’s who will appear on our virtual stage today, and one big question we have for each session:

2-2:30 p.m.: Mellody Hobson of Ariel Investments and Meghan, The Duchess of Sussex, of Archewell

Don’t forget to register here to attend the two-day summit, free of charge.

G.E. plans to break itself up. The industrial conglomerate said this morning that it will split into three public companies, focused on aviation, health care and energy. The announcement comes after years of pressure to simplify its business and boost returns to shareholders. G.E.’s shares are up more than 10 percent in premarket trading.

Robinhood says millions of customers’ data was stolen. The trading app said that a hacker breached its systems last week and stole the full names and email addresses of millions of users, as part of an extortion attempt. No customers suffered financial losses, and the company is working with law enforcement.

Starbucks tries to delay a unionization vote in upstate New York. The coffee chain yesterday sought to block employees at three Buffalo locations from voting on a store-by-store basis, as opposed to collectively. No corporate-owned Starbucks stores in the U.S. are unionized.

Live Nation’s shares tumble after the Astroworld disaster. The entertainment company was sued over the music festival in Houston, where crowd surges killed eight people and injured dozens more. Travis Scott, the headliner, is also under scrutiny for his history of encouraging wild behavior at his concerts.

The fallout from Aaron Rodgers’s anti-vaccine stance spreads. After the N.F.L. quarterback, who is missing games after testing positive for Covid, gave a misinformation-filled interview, State Farm showed far fewer ads featuring him, though it said it would keep him as a spokesman. The N.B.A. great Kareem Abdul-Jabbar argued that Rodgers’s actions risked damaging pro sports more broadly.

A resignation could reshape the Fed

Randal Quarles, a former Wall Street lawyer appointed to the Federal Reserve Board by President Donald Trump, is leaving the central bank. Quarles, who spent four years as head of bank supervision, announced yesterday that he will depart in December. His open seat will allow the Biden administration to reshape the central bank’s leadership. Here’s what some Fed watchers think will happen next:

There will likely be more regulation of the financial sector, broadly defined. Quarles watered down some regulations enacted after the financial crisis, drawing criticism from Senator Elizabeth Warren and some other Democrats, who want tighter oversight of banks. Karen Petrou, a consultant and banking regulation expert, said the next head of supervision would likely take a closer look at Bitcoin and other nontraditional areas of finance.

The odds of Jay Powell keeping his job could improve. Powell, who was nominated for chair by Trump, is considered to have done a good job managing the pandemic slowdown. But Biden is under pressure to replace him when his term expires in February with someone viewed more positively by progressives. (Bloomberg reports that Fed governor Lael Brainard, Powell’s main competition, was interviewed for the top job last week.) Another open seat on the Fed’s board helps Powell’s chances, said Dean Baker of the liberal-leaning Center for Economic and Policy Research: “This gives Biden a very good opportunity to pick people to satisfy those progressives who have criticized Powell on regulation, while still reappointing him as chair.”

The Fed may raise interest rates at a slower pace. The Fed is expected to start raising interest rates next year. But another liberal board member, who may be more inclined to favor job growth over limiting inflation, might push the Fed to slow the pace of planned increases. “On balance, it may affect the timing of rate increases somewhat,” said David Wessel of the Brookings Institution.

“I look at my life as pre-Beeple and post-Beeple. The same way the world thinks about before Jesus Christ and after. Beeple is kind of my Jesus.”

— Noah Davis of Christie’s New York, who helped to sell a nonfungible token by the artist Beeple for $69 million in March, shaking up the art world. (For more on the burgeoning NFT industry, read Kevin Roose’s dispatch from “Crypto Coachella” for The Times.)

It is the nature of meme stocks to get lots of attention — buzziness is what gives them their name, after all. The volatility generated by the frenzy of trading GameStop, AMC and others has also attracted the attention of officials in Washington, who worry about the dangers to the market. But according to a new report, fears about meme stocks may be as overblown as their valuations.

Social media “echo chambers” have fueled an increased appetite for risk, the Fed wrote in a report released yesterday. When retail traders meet online and egg each other on, it can lead to rapid inflows and outflows for the meme stock of the moment. “Investors find themselves communicating most frequently with others with similar interests and views, thereby reinforcing their views, even if these views are speculative or biased,” the Fed wrote.

But meme stocks have not disrupted financial stability, leaving no “lasting imprint on broader markets,” the Fed said. (The central bank’s report echoed a similarly measured assessment last month by the S.E.C.) A few trends “should be monitored,” the Fed said, including the vulnerability of younger investors to price swings when trading options, and the suitability of financial firms’ risk management systems during extreme volatility. “More frequent episodes of higher volatility may require further steps to ensure the resilience of the financial system,” the Fed said.

The case against vaccine mandates

The Biden administration yesterday urged a court not to block a federally imposed coronavirus vaccine mandate for large employers. Last week, a three-judge panel from the politically conservative U.S. Court of Appeals for the Fifth Circuit in Louisiana granted a temporary stay of the mandate in response to a challenge by businesses, states and others.

The administration argued that blocking the mandate now was “premature,” given that its major deadlines are still at least a month away. But it also said that a delay in imposing the new rule “would likely cost dozens or even hundreds of lives per day.”

The historical precedent: The last time OSHA issued an emergency standard was in 1983, to lower the permissible legal level of asbestos exposure. The Fifth Circuit knocked it down as unnecessary, but, importantly, held that judges should not question OSHA’s authority to label asbestos a “grave danger.” In doing so, “the court intimated that hazards much less dangerous than Covid-19 could be deemed a grave danger,” said Carl Tobias, a law professor at the University of Richmond.

What happens next? If the Fifth Circuit grants a permanent stay, the Justice Department could appeal to the Supreme Court, which has so far acted in favor of vaccine mandates. Trade groups like the National Retail Federation have argued that the administration is moving too quickly — they are asking to push the mandate deadlines further beyond the holiday shopping season. Drawn-out legal challenges, even if unsuccessful, could achieve this. The White House, for its part, is urging companies to adopt mandates now, as they have proven effective at convincing the hesitant to get vaccinated. Both sides agree, then, that timing is crucial.