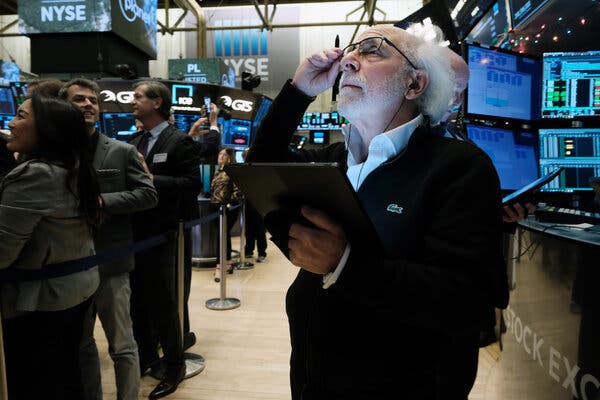 U.S. stocks have been on a run, with the S&P 500 up nearly 4 percent so far this week, and more than 25 percent for the year. Fears about the Omicron variant of the coronavirus quickly faded, with stocks regaining all their lost ground. This makes some market watchers nervous.

In a note to clients, Bank of America equity strategists led by Savita Subramanian said that the S&P 500 now has a real earnings yield, the inflation-adjusted ratio of earnings per share to the stock price, approaching negative 3 percent, the lowest since 1947.

Besides a bear market, there are two ways a negative earnings yield can turn positive.

After the initial shock of the pandemic, stocks have shrugged off negative news and set records. (S&P 500 futures are down modestly this morning.) But the more that analysts consider the numbers, the more they worry that the gravity-defying rise may not last much longer. That said, “we live in a world where real negative rates are almost acceptable as a norm,” Subramanian noted.

Fitch says that Evergrande is in default. The ratings agency is the first to declare that the troubled Chinese real estate developer has defaulted on its overseas bonds, with an interest payment missed this week. Neither Evergrande nor the Chinese government has confirmed a default.

The E.U. proposes sweeping protections for gig-economy workers. The European Commission is considering rules pushing companies like Uber to classify their drivers and couriers as employees, entitled to minimum wages and other legal shields. If the proposal passes, the rules would be among the strictest in the world; companies are expected to contest it fiercely.

The U.S. passes a vaccination milestone. About 60 percent of Americans have been fully vaccinated against the coronavirus, a level many other wealthy countries long surpassed. Meanwhile, a new study found that the Omicron variant has been four times more transmissible than Delta; Britain unveiled tougher pandemic restrictions, drawing complaints from businesses; and the financial firm Jefferies was the latest to tell employees to go back to working remotely.

Americans continue to quit in near-record numbers. Over 4 million people left their jobs in October, below September’s numbers but still near a historic high, according to the latest Labor Department data. Among the most-affected sectors were hospitality, retail and entertainment. Relatedly, Derek Thompson of The Atlantic offers an interesting argument: The “Big Quit” isn’t really about quitting.

Apple scores a win against Epic Games. A federal appeals court delayed a legal order requiring the iPhone maker to help app developers circumvent its App Store fees. The delay is until the appeals process for Epic’s lawsuit against Apple plays out, which may take a year or more.

Exclusive: A new call to strip Activision’s chief of a board seat

Bobby Kotick, the C.E.O. of Activision Blizzard, continues to face pressure over accusations that he didn’t respond to claims of sexual misconduct from employees at the video game company. Now, a union-led investment group plans to demand that Kotick leave his position as an outside director at Coca-Cola, DealBook is the first to report.

The SOC Investment Group will ask Coca-Cola not to renominate Kotick to its board next year. The call by SOC, which works with union pension funds that it says manage over $250 billion in assets (and was previously known as the CtW Investment Group), comes weeks after the group called for Kotick to resign as Activision’s C.E.O.

The group had initially campaigned against what it said was Kotick’s outsized pay package. It shifted gears after a California regulator accused Activision of tolerating pervasive sexual harassment; the S.E.C. started an investigation; and The Wall Street Journal reported that Kotick had known about complaints for years, often without acting. (Kotick denied many of the accusations in the report.)

SOC is focusing on Coke because of its public commitments to diversity and inclusion. “We don’t think he’s an adequate person to serve as a director,” Richard Clayton, SOC’s research director, told DealBook. It is the latest effort to hold the drinks company to its stated commitment to social justice; the National Legal and Policy Center also cited the company’s willingness to speak out on social issues when it demanded Kotick’s resignation from the board last month.

Clayton said that while Coke wasn’t necessarily a leader in corporate America on pushing for social justice, it wasn’t a laggard either. (To give it another reason not to renominate Kotick, SOC will also tell Coke that he should instead focus on fixing Activision’s culture.)

If Coke doesn’t reject Kotick, SOC will oppose the re-election of several directors. “Should the Coke board renominate Kotick, that would tell us about a lack of commitment” to those social goals, Clayton asserted. He added that SOC hadn’t yet determined which other directors it would oppose for re-election. Coke’s 12-member board is up for election every year.

A spokesman for Coca-Cola declined to comment on investor calls to remove Kotick from its board.

Seen and heard at congressional hearings

► “Parents are asking, what is Congress doing to protect our kids and the resounding bipartisan message from this committee is that legislation is coming? We can’t rely on self-policing.”

— Senator Richard Blumenthal, Democrat of Connecticut, at a hearing about Instagram and children. Lawmakers from both parties grilled Adam Mosseri, the head of the social network, about leaked internal research that showed Instagram had a toxic effect on some teenagers. “What I can commit to you today,” Mosseri said, “is that no child between the ages of 10 to 12 — should we ever manage to build Instagram for 10- to 12-year-olds — will have access to that without explicit parental consent.”

► “What do you say to the folks that say this doesn’t seem like a new financial system per se but an expansion of the old one?”

— Representative Alexandria Ocasio-Cortez, Democrat of New York, at a hearing with cryptocurrency executives. She and other Democrats expressed concern about crypto’s rapid rise, urging stricter regulation of the sector using existing tools. Republicans, and the executives called to testify, warned against stifling the industry. “I really do believe we are building a new global economic infrastructure layer,” Jeremy Allaire of Circle, a crypto payments company.

Are you a major donor, too?

MacKenzie Scott is one of the world’s biggest philanthropists, making waves with her generous donations and plan to give away as much of her $60 billion fortune as she can, as fast as possible. But the size and destination of her most recent gifts are undisclosed, at least by her, which she explained in a blog post yesterday titled “No Dollar Signs This Time.”

Scott wants to reframe the conversation on giving. The author and former wife of the Amazon founder Jeff Bezos has been thinking about the word “philanthropy,” she wrote, which is “not a word I have ever loved or identified with.” She said it has become associated with wealthy donors trying to solve other people’s problems, and feels no kinship with these people. “Somewhere along the line, this big, lovely word had shriveled to describing the humanitarian impulses of less than 1% of the world’s population,” she wrote.

It’s not just about money, Scott noted, citing broader dictionary definitions of philanthropy that are “inclusive and beautiful,” like “love of humankind.” She hopes to advance a view of the “generosity economy” that includes not just funds from wealthy donors, but all kinds of help people give, from shoveling snow for a neighbor to marching in a rally. “This is all philanthropy,” she wrote, and these acts have a multiplier effect that generate “gigantic” social and economic benefits.

But about all that money … Scott wrote that it was up to recipients of her latest donations to decide whether to disclose them, and she hoped that any attention this generated would go to the work and not the size of the checks. “In the meantime,” she wrote, “I hope any attention from this writing falls on what I have in common with every person who ever acted on an impulse to help someone.”

Tags
Sai̇d She Soc Stock This

To Get the Most From Social Security, Log On