New York has so few great seafood restaurants you’d think we were the largest city in Nebraska. Outside of the most exclusive sushi bars, kitchens that are entirely devoted to handling fish with care and finesse are rare. When I told a friend I was reviewing a new seafood restaurant that was actually kind of nice, he said, “Nice? Like Le Bernardin?”

No, Dame isn’t like Le Bernardin. No more than two dozen people can squeeze into its dining room in a pinch, and some will sit facing the chef, Ed Szymanski, as he works at the stove. Before the weather turned cool, another 30 or so could dine outside on the sidewalk and on the pavement of Macdougal Street in Greenwich Village.

Sitting outdoors like a guest at a lawn party, you can order what the menu calls “a proper Pimm’s Cup.” These are excellent. When you are ready for wine, you will be handed not a leather-bound volume as at Le Bernardin, but a sheet of paper whose two sides are headed, “What James Bond is Drinking” and “What Austin Powers is Drinking.” Both spies seem to prefer French whites, but Bond likes his pedigreed and well-tailored, while Powers goes for the free-spirited and sometimes funny-smelling ones.

With a smile and a wink, though, Dame has a fresh point of view on cooking and eating seafood. Its relaxed, modern farmers’ market sensibility is propped up, as needed, by the structure of classic French technique. Like the more appealing restaurants in London, Mr. Szymanski’s hometown, it is unstuffy and refined at the same time. 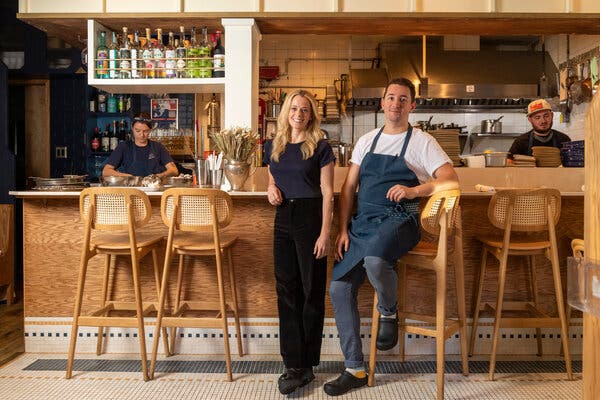 Patricia Howard and Ed Szymanski meant to open a grilled-meats restaurant. Then came the pandemic.Credit…Evan Sung for The New York Times

Dame’s focus on fish is accidental. In the beginning Mr. Szymanski and Patricia Howard, the two owners, intended to specialize in meat grilled on a wood fire. When the pandemic came, though, they survived by selling takeout fish and chips at a series of pop-ups. They meant to get out of the fried-fish business, but the pop-ups kept getting more popular.

By the time they were ready to open a real restaurant in Greenwich Village, in June, Dame was already known as that great fish-and-chips place on Macdougal Street. So they did the only logical thing and devoted the whole kitchen to seafood. They don’t even have a burger on the menu for the heathens.

The meat palace would have been worth a look, if the charcoal-grilled quail Mr. Szymanski used to serve a few years ago when he was the chef at Cherry Point, in Brooklyn, is any indication. But looking at the restaurant he and Ms. Howard did open, I think I may have finally found a pandemic silver lining.

You can get raw oysters almost anywhere these days, but you won’t find them at Dame, where they are broiled under a plush yellow robe of hollandaise. At Cherry Point, Mr. Szymanski did a version of this dish with smoked rosemary in the hollandaise; this time he enriches the sauce with the alpine-meadow perfume of green Chartreuse. The beef tartare on toast that Cherry Point served under flakes of shaved bottarga has become tuna tartare at Dame. With big, red cubes of yellowfin planted in a spread that tastes of lemon and mustard, it’s at least as good now, and may be better.

There’s an intelligent simplicity to the early courses, like the grilled blowfish tails that sit in melted Espelette butter under a warm spoonful of red pepper-shallot relish. Smoked whitefish croquettes are arranged around a dip of Calabrian chile jam. Small, tender squid and shishito peppers alternate on griddled skewers with parsley oil — an effectively understated sauce.

The busiest dish may be the chilled raw scallops in a cool, smoky fish broth with jewel-like ornaments of orange segments, finger-lime capsules, trout roe and emerald drops of fig-leaf oil, and even that is more unified than it sounds. There was a warm tart of creamy crab ragout spiced with ’nduja in a brik shell, but it somehow didn’t work as well as the Basque txangurro that seemed to inspire it. That rich crab stew is used to better effect on a plate of creamy stewed gigantes under a salad of parsley leaves and onions.

Oysters are broiled under hollandaise sauce with a trickle of green Chartreuse.Credit…Evan Sung for The New York Times

As the parsley salad suggests, an English sensibility is knitted into the whole menu. Most people will find it easiest to spot in the desserts. Until the weather turned cool, these included an Eton Mess, a real one though not a very messy one. In its place now is a delicate lemon posset with an intense sauce of pulped passion fruit. A fig torte in September needed more figs, or more something, but a more recent torte got wonderful results out of combining pears with white chocolate.

As charming and complete as the earlier and the final courses can be, the main plates don’t always feel fully realized. I’ve never seen another restaurant garnish skate with more skate: first a sautéed wing and then a croquette that, when you cut into it, gushes with melted butter like chicken Kiev. It was clever but it was also a lot of butter, because the sautéed wing was already cooked in brown butter and sauced with a butter-mounted chicken jus.

The contrast of tender fish with crunchy fish loses some of its novelty when it is repeated in another dish on the menu, this one with poached and fried turbot. And sweetbreads may well be terrific with lobster, but not when they’re overcooked.

At times, I suspected that Dame hadn’t quite solved the problem of replacing grilled meats on the menu. Then I would remember that the fish and chips was still on its way.

The recipe that got Dame through the pandemic leans heavily on one hatched by the chef Heston Blumenthal for a BBC series called “In Search of Perfection.” It calls for boiling the potatoes before frying them twice and manipulating the batter’s gluten bonds, gas content and boiling point to produce an airy, weightless, almost moisture-free crust. It is as close as anyone is likely to get to a fried cloud.

Each time I eat Dame’s fish and chips, made with hake briefly cured in salt, I prefer it to any other main course on the table. I always try to work up some guilt about that. So far, I’ve failed.

What the Stars Mean Because of the pandemic, restaurants are not being given star ratings.

Who Owns a Recipe? A Plagiarism Claim Has Cookbook Authors Asking.

A Thanksgiving History Lesson, in a Handful of Corn

For Those Who Feel Rejected by Family, Friendsgiving Can Be a Lifeline