A new Covid-19 pill from Merck has raised hopes that it could transform the landscape of treatment options for Americans at high risk of severe disease at a time when the Omicron variant of the coronavirus is driving a surge of cases in highly vaccinated European countries.

But two weeks after a Food and Drug Administration expert committee narrowly voted to recommend authorizing the drug, known as molnupiravir, the F.D.A. is still weighing Merck’s application. Among the biggest questions facing regulators is whether the drug, in the course of wreaking havoc on the virus’s genes, also has the potential to cause mutations in human DNA.

Scientists are especially worried about pregnant women, they said, because the drug could affect a fetus’s dividing cells, theoretically causing birth defects. Members of the F.D.A. expert committee expressed those same concerns during a public meeting on Nov. 30.

“Do we want to reduce the risk for the mother by 30 percent while exposing the embryo and the fetus to a much higher risk of harm by this drug?” Dr. James Hildreth, the president of Meharry Medical College in Tennessee, said at the meeting. “My answer is no, and there is no circumstance in which I would advise a pregnant woman to take this drug.”

The F.D.A. advisers also noted that the risks could extend to other patients, including men wanting to become fathers, though those risks remain poorly understood and Merck said its own studies had turned up no evidence that the drug causes DNA mutations.

Crucially, molnupiravir is expected to work against Omicron. But it has drawn concern from some scientists and regulators in Europe for being less effective than certain other treatments: It has been shown to reduce the risk of hospitalization and death by 30 percent if given within five days of symptoms emerging.

Here’s what scientists know about how the drug works and its potential risks.

How does molnupiravir work?

When the drug is processed in the body, it creates compounds that closely resemble one of the building blocks of RNA, the genetic material inside the coronavirus.

That causes problems for the coronavirus as it makes copies of itself: Once the virus enters a cell and starts replicating, the drug compound can slip into the virus’s RNA and insert enough errors that the virus cannot survive.

“What molnupiravir does is it disguises itself,” Elizabeth Campbell, an expert in structural biology at the Rockefeller University who studies coronavirus antivirals, said in an interview. “It can propagate errors that are going to be sprinkled all over the genome.”

Making more and more mistakes, the virus eventually grinds to a stop, Dr. Campbell said. That helps the body fight off the infection and potentially saves the patient’s life.

The problem is that the same compound that interferes in the replication of the virus’s genetic material can also be transformed into one that resembles a building block of DNA. Some scientists are concerned that could cause errors in a patient’s own DNA, or in that of a developing fetus.

“If cells are replicating, it means they’re uptaking a version of one of the DNA building blocks derived from molnupiravir and incorporating it,” Dr. Campbell said.

How serious a problem is that?

A team of researchers at the University of North Carolina studied the use of molnupiravir in isolated hamster cells over 32 days and found that the drug did induce mutations in DNA.

Those mutations could “contribute to the development of cancer, or cause birth defects either in a developing fetus or through incorporation into sperm precursor cells,” the authors of that study wrote.

The drug targets only dividing cells, which are relatively sparse in an adult. That poses a narrower risk than other so-called mutagens, like radiation, which can damage DNA in all types of cells.

Still, Ronald Swanstrom, an H.I.V. researcher at the University of North Carolina at Chapel Hill who helped lead the hamster cell study, said that adults had enough dividing cells — in bones, for example, and in the lining of the gut — to cause concern. He also noted that men were constantly making dividing sperm cells that could carry potential mutations.

In a letter objecting to Dr. Swanstrom’s conclusions, Merck scientists said that hamster cells were exposed to the drug for considerably longer than Covid patients would be. The company said that it tested the drug in rodents and found no signs of DNA mutations (also known as mutagenicity).

“We see this molecule as having a very low risk for mutagenicity,” Dr. Roy Baynes, Merck’s chief medical officer, said in an interview. “This drug is used for five days, and the goal is to eradicate the virus quickly, and this is not a long-term treatment.”

Brianne Barker, a biologist at Drew University, said that Merck should publish its rodent data, but that the short course of treatment lowered the risks. She said that the isolated hamster cells were also “a bit different from cells you’d actually find in an organism,” making it difficult to know how serious the dangers would be in people.

What are the risks during pregnancy?

Cells in a fetus are dividing all the time, heightening the risk of mutations. As a result, Merck excluded pregnant and breastfeeding women, as well as women likely to become pregnant, from its clinical trial.

“Human development in utero is an absolutely astounding sequence of events,” said Dr. John Mellors, an infectious disease specialist at the University of Pittsburgh Medical Center. “You start tinkering with that in any way, you can end up with a disaster.”

Dr. Mellors noted that Merck had reported that high doses of the drug in pregnant rats could cause developmental abnormalities or the death of a fetus.

In Britain, health authorities have said that Merck’s pill should not be given to pregnant or breastfeeding women. Women who could become pregnant, they advised, should use contraception while taking the drug and for four days after.

“If I was pregnant, I wouldn’t take this,” Dr. Campbell said. “I probably would go so far as to say I wouldn’t give it to a child, a teenager, anyone whose cells are still dividing and differentiating at higher rates.”

The F.D.A. warns that ribavirin should not be given to pregnant women or to their male partners, and that pregnancy should be avoided during treatment and for months afterward.

“There’s no doubt that if you read the label, you pause,” said Dr. Ashwin Balagopal, a researcher at Johns Hopkins University who has treated hepatitis C patients with ribavirin and is now leading a study of molnupiravir. “We were careful about how we did it, but we didn’t avoid using it because we thought, let’s wait for something better.” 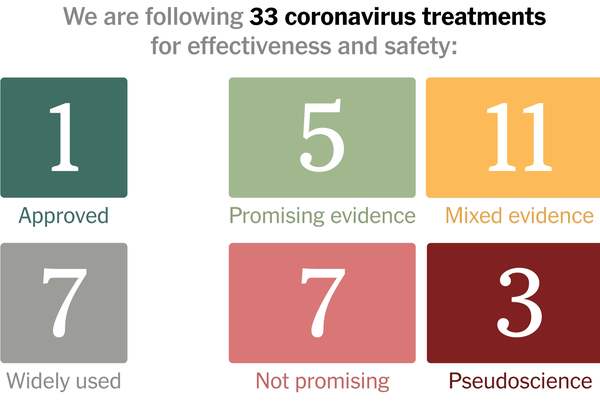 How are scientists weighing the drug’s benefits and risks?

Within weeks, Pfizer is expected to receive the government’s green light for its own Covid pill, which appears to be more effective than Merck’s — and doesn’t carry the risk of mutations in human DNA.

But molnupiravir is expected to be more readily available than Pfizer’s drug in the coming months, when the country may be facing a new surge in cases caused by the Omicron variant.

U.S. nears 800,000 Covid deaths. The United States is on the cusp of surpassing 800,000 deaths from the virus, and no group has suffered more than older Americans. Seventy-five percent of people who have died in the U.S. have been 65 or older. One in 100 older Americans has died from the virus.

The Omicron variant. The latest Covid-19 variant, which has been detected in dozens of countries, seems to dull the power of the Pfizer vaccine, but the company said its boosters offer significant protection. Omicron appears to spread rapidly, though it may be less severe than other forms of the virus.

A new wave worries Britain. With cases of the Omicron variant doubling every three days and the government introducing new restrictions, Prime Minister Boris Johnson said that the country’s vaccine booster program would be accelerated to offer all eligible adults a booster shot by the end of this year.

Vaccine mandates in Europe. The latest wave of the pandemic is prompting countries like Germany and Italy to impose restrictions that single out those who are not vaccinated. The measures are rekindling the debate over governments’ right to curtail individual liberties in the name of public health.

Boosters in the U.S. The F.D.A. authorized Pfizer to provide boosters to 16- and 17-year olds on an emergency basis, six months after receiving their second dose of the vaccine. The C.D.C. promptly signed off on the move. Pfizer recently said that a booster shot of its vaccine offers significant protection against Omicron.

“We have to do what we can with what we have right now,” Dr. Balagopal said.

As people age or develop conditions that put them at higher risk of getting severely sick from a coronavirus infection, the benefits of the drug could outweigh the risks, scientists said. Dr. Barker noted that adults readily accept an increased risk of mutations from being in the sunlight, for example.

Dr. Swanstrom, the University of North Carolina researcher, said he had wrestled with whether to speak up about concerns that remain largely theoretical, given the drug’s potential to save lives.

“Is it better to subvert this concern and hope for the best?” he said. “Or is it better to be open about the concerns and try to figure out what the path forward should be and have some kind of consensus around that?”

He added, “If the risk is really trivial, then it would be a bad mistake not to give it.”

Scientists have urged Merck to publish the full findings of its rodent studies examining the risk of DNA mutations.

Several experts also urged that researchers be allowed to study the long-term health outcomes of people who receive molnupiravir. That data could indicate whether people who take the drug develop cancer or have children with birth defects at higher rates than would be expected.

Merck executives told the F.D.A. advisory committee that the company would enact a surveillance program to monitor women who take molnupiravir during pregnancy. (Even if the drug is not formally authorized for this group, women may take the drug before they know they are pregnant.)

Scientists said that while vaccination is the safest, most effective way of reducing Covid risks, antiviral pills will remain an important tool for addressing later stages of the pandemic.

“The entire population will never be completely vaccinated, immune responses will fade with time and people will get infected — if not here, then in other countries,” said Matthias Götte, a professor at the University of Alberta in Canada who has studied molnupiravir.

The stakes are high for future epidemics, too. Molnupiravir has potential to work against a number of other viruses, like SARS and influenza. But scientists said that there were some signs the drug would need to be used at higher doses against other viruses, making it all the more urgent to understand the risks.

“We could use this against the next epidemic on Day 2,” Dr. Swanstrom said. “We should at least put ourselves in a position to find out what it means to use this drug long term.”

Yes, Omicron Is Loosening Its Hold. But the Pandemic Has Not Ended.