When Jon Harari first moved to Murray Hill in 2006, the lively bar scene on Third Avenue suggested to him that “all the residents of the neighborhood were kids right out of college,” like himself, he said.

But the past 15 years have taught Mr. Harari, now 39 and the chief executive of a digital marketing firm, that “there’s so much more history, so much more depth” than he once imagined. “It’s an established neighborhood with over 250 years of history,” said Mr. Harari, who rents a one-bedroom at the American Copper Buildings, a pair of striking copper-clad towers connected by a three-story skybridge, at 36th Street and First Avenue. (Recent one-bedroom rental listings at the towers, which opened to tenants starting in 2017, ranged from $4,958 to $6,070 a month.)

Murray Hill, on the eastern flank of Midtown Manhattan, is “very diverse — it’s young and old,” Mr. Harari said. In addition to the college graduates who flock there for the nightlife, the United Nations headquarters, just over the neighborhood’s northern border, lures international residents, and the New York University medical complex, just south in Kips Bay, adds doctors and other health care professionals to the mix.

If segments still skew “very young,” Mr. Harari said, he is “also in touch with people living in the neighborhood for 10, 20, 30 years,” through his role as a trustee of the Murray Hill Neighborhood Association; its members, he noted wryly, are “not necessarily wearing their college sweatshirts at a bar.” 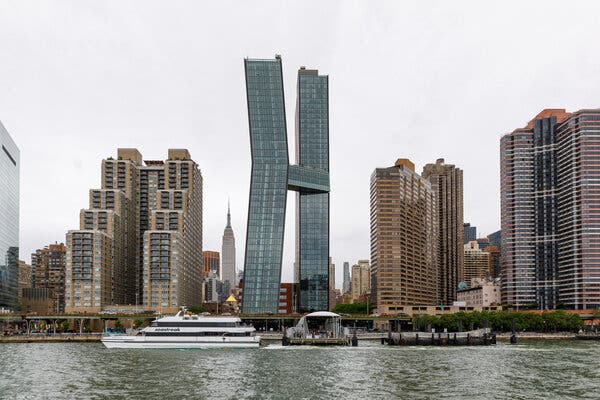 The American Copper Buildings, two striking copper-clad towers at 36th Street and First Avenue, were completed in 2017 and 2018. Recent one-bedroom rental listings there were $4,958 to $6,070 a month.Credit…Stefano Ukmar for The New York Times

Once home to some of New York’s most affluent families, the neighborhood’s richness can be found among the 19th-century rowhouses and mansions along its tree-lined side streets, many of which make up the Murray Hill Historic District, which was designated in 2002. And construction of high-rise luxury residential buildings continues on the neighborhood’s southeastern edges, around 34th Street.

“The district to me is beautiful because it’s a blend of historic and the future,” said Kyle Athayde, 30, the chairman of Manhattan Community Board 6, which represents a number of neighborhoods on the East Side including Murray Hill. “You have areas that are residential,” he said, and then “you walk one block and you have access to everything.”

Sohaib Salaam valued this combination of serenity and accessibility when he bought a two-bedroom condo with a view of the East River at First Avenue and 37th Street in July for $1.2 million. “You’re in the heart of the city, yet you’re away from all the madness,” said Mr. Salaam, 36, who works as a digital strategist for broadcast media. And when business or pleasure require him to leave the neighborhood, “I can be at the Upper East Side in 15 minutes or in the Lower East Side in 15 minutes.”

Generally accepted boundaries for Murray Hill are East 34th Street to East 42nd Street, and Madison Avenue to the East River. Many residential towers define the neighborhood’s eastern avenues, while townhomes, brownstones and a few historic mews dot the side streets farther west. (The nearby Tudor City apartment complex “is considered its own neighborhood,” said Mr. Athayde, the community board chairman.)

The neighborhood’s economy has suffered during the coronavirus pandemic. Early on, “the district was completely empty,” Mr. Athayde said. Especially hard hit, he said, were bars and restaurants, as residents avoided businesses with crowds. And mom-and-pop stores that depend on foot traffic, including shoe-repair shops, dry-cleaners and barber shops, along with some small clothing stores, closed.

But the area of late has been stirring with more activity, with restaurants reopening and construction noise once again filling the background.

“Murray Hill is seeing a transformation” with the emergence of new luxury buildings and retail establishments, said Mukul Lalchandani, an agent with Level Group realtors. Under construction is Eastlight, at 501 Third Avenue, a 34-story condominium development. Occupancy is scheduled for next summer, said Andrew Peerless, a senior project director with the Corcoran Sunshine Marketing Group.

Another development, at 509 Third Avenue, also on 34th Street, is planned as a 40-story rental tower, with a projected completion date in fall 2023.

A grassy 6.4-acre lot spanning 38th to 41st Streets on the east side of First Avenue — formerly the site of Con Edison’s Waterside power plant — remains undeveloped after plans for a complex collapsed amid the financial crisis more than a decade ago.

Area restaurants can vary from the upscale Zuma, serving modern Japanese cuisine on Madison Avenue, to the venerable Sarge’s deli, which was founded in 1964, on Third Avenue. For the culturally minded, there is the Morgan Library & Museum, on Madison, and Scandinavia House, on Park Avenue, which presents programs and exhibitions.

What Murray Hill lacks is sufficient affordable housing, said Mr. Athayde, who lives in an affordable-housing unit in the neighborhood with his parents and younger brother. Though he earns what he said is a “decent” salary from his job with the New York State Office for New Americans, Mr. Athayde said he “can’t afford to move out” of his parents’ apartment and remain in Murray Hill.

And 200 rental properties on StreetEasy ranged from a brownstone studio with a lofted sleeping area for $2,000 a month to a four-bedroom penthouse with four terraces and more than 3,500 square feet for $25,000.

Although initial expectations that employers would require their staff members to return to the office early next year created a housing “crunch,” Mr. Lalchandani said, the situation shifted in early December with the emergence of the Omicron variant of the virus. “That influx of residents we were expecting has slowed down,” he said.

The Morgan Library & Museum, on Madison Avenue between 36th and 37th Streets, was founded in 1906 to house J.P. Morgan’s private library. The glass entrance was added in a 2006 renovation.Credit…Stefano Ukmar for The New York Times

Murray Hill’s vibe may depend on which part of the neighborhood one is exploring. The “very vibrant restaurant and bar scene,” for example, continues to make the area “a hub for young professionals” and “young families,” Mr. Athayde said.

Its gleaming towers lend it a contemporary vibe. By contrast, the tree-bedecked side streets of the Historic District — two areas roughly between 35th and 38th Streets and Park and Lexington Avenues — with their elegant Italianate, Empire and Neo-Georgian rowhouses, summon an earlier age of Murray Hill as among the city’s premier residential neighborhoods. And the East River Esplanade, just beyond Franklin D. Roosevelt Drive from 38th to 41st Street, recently had a makeover, with added amenities for its waterside pier.

With its diverse elements, Murray Hill retains longtime residents like Lillian Seidman Davis, a financial adviser who has lived there for about 30 years. Since 2000, she has owned a two-bedroom apartment in a brownstone. “It’s such a wonderful neighborhood,” said Ms. Davis, a pickle-ball enthusiast who enjoys watching games at the local St. Vartan Park, and a bicyclist who uses the Citi Bikes around town with her husband. “You can get around anywhere” from Murray Hill, she said. “Nothing is too far.”

Neighborhood schools include P.S. 281 The River School, at 425 East 35th Street, with 459 students from prekindergarten to fifth grade. In 2018-19 — the last year for which figures are available — 80 percent of students met state standards in English, compared with 48 percent citywide; 85 percent met standards in math, compared with 50 percent citywide.

The 10 townhouses on Sniffen Court, a 36th Street mews between Lexington and Third Avenues, were originally carriage houses that were later converted to private homes. Sniffen Court is its own historic district.Credit…Stefano Ukmar for The New York Times

The East 34th Street ferry stop, at 35th Street and F.D.R. Drive, offers daily service to Hunters Point in Queens, Williamsburg and Dumbo in Brooklyn, and Wall Street/Pier 11 in Manhattan. A one-way ticket is $2.75 for adults, and a 30-day pass costs $121.

In 1753, Robert Murray, a prominent merchant, and his wife, Mary Lindley Murray, bought a tract of land that roughly corresponds to the boundaries of today’s Murray Hill. According to a legend recounted by the Murray Hill Neighborhood Association, on Sept. 15, 1776, Ms. Murray hosted British troops, serving them a pot of tea while American rebel soldiers escaped the area after a surprise attack in nearby Kips Bay amid the Battle of Manhattan.

Tags
One Sai̇d Street Which York

Will Installing an Induction Range Help or Hurt the Value of My Home?

Homes That Sold for Around $1.5 Million

House Hunting in Mexico City: Wood and Marble Mingle in a Stylish Triplex