Dirck Halstead, who photographed world-shaking events for half a century for United Press International, Time magazine and other news outlets, sometimes under harrowing conditions, died on Friday in Boquete, Panama. He was 85.

David Hume Kennerly, his friend and a fellow photographer, said the cause was a cerebral hemorrhage.

Mr. Halstead took pictures of presidents, including Richard M. Nixon during his landmark trip to China in 1972 and Bill Clinton, whom he captured in a particularly well-known image with Monica Lewinsky in 1996. He photographed domestic protests. And he documented the war in Vietnam, where he opened U.P.I.’s first picture bureau in Saigon in 1965 as American involvement in the conflict was deepening.

When the first American combat troops arrived in Vietnam that year — Marines coming ashore in Da Nang — he photographed the moment. Eleven years later, he captured images of the fall of Saigon, coverage that won him the Robert Capa Gold Medal from the Overseas Press Club.

“He covered history in an intelligent way and took great risks doing it,” Mr. Kennerly said in a statement.

“Dirck was cool under fire,” he added. “One time in 1972 we were pinned down by North Vietnamese regulars near An Loc. South Vietnamese soldiers were dying left and right around us, mortar rounds were exploding, we were taking heavy machine gun fire from the tree line, when Dirck looked at me and said, ‘Can’t wait to have a drink at the Melody Bar tonight.’” 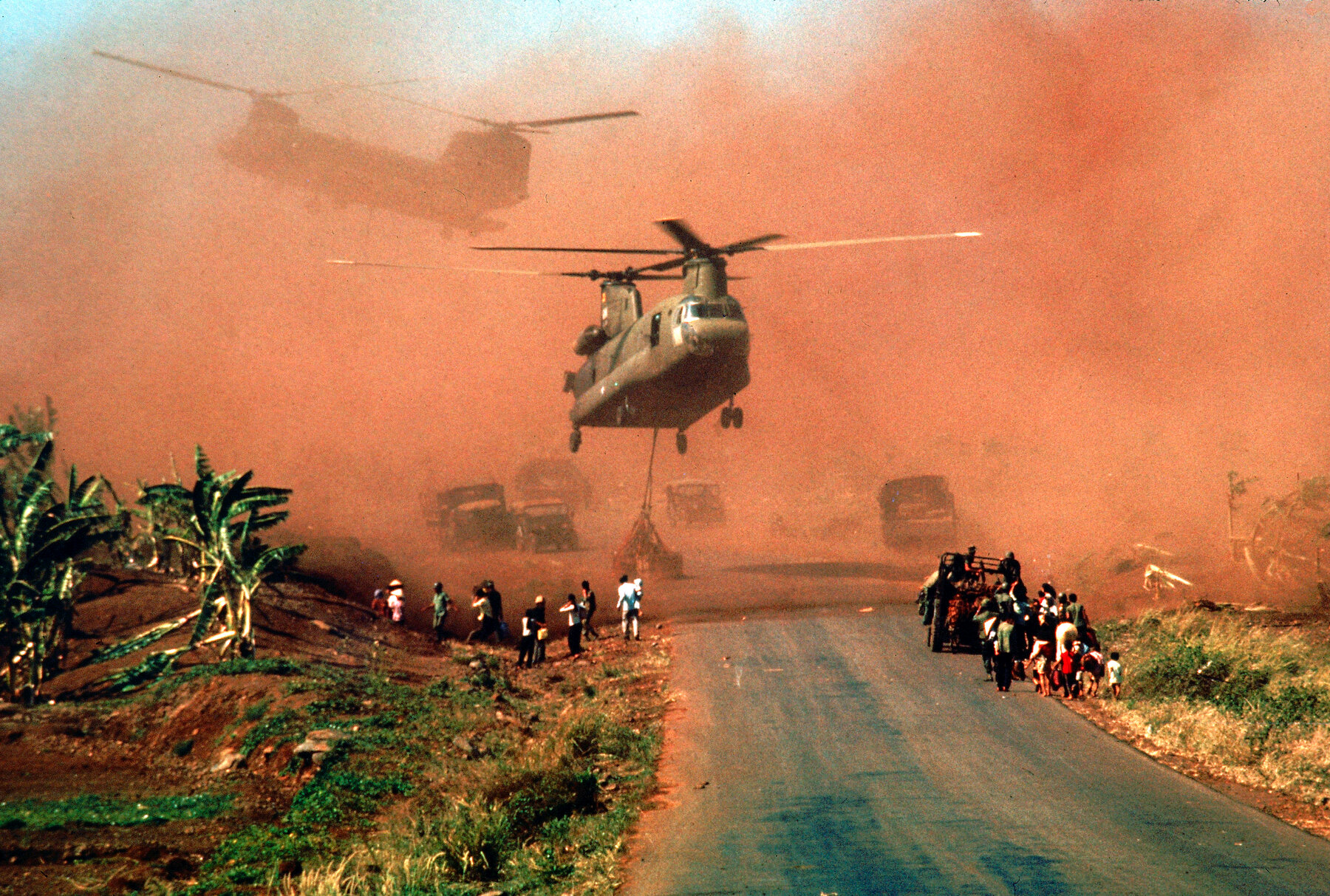 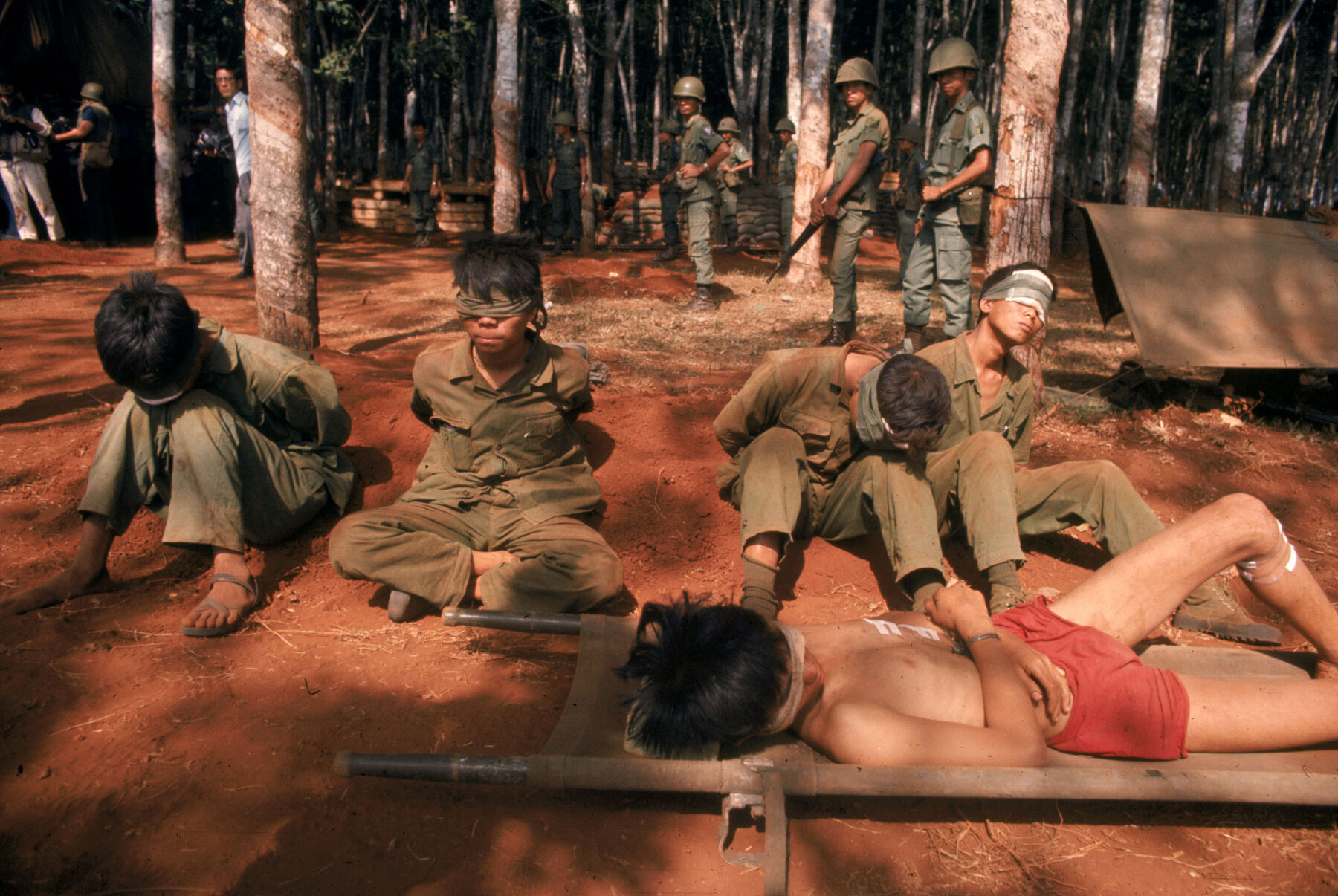 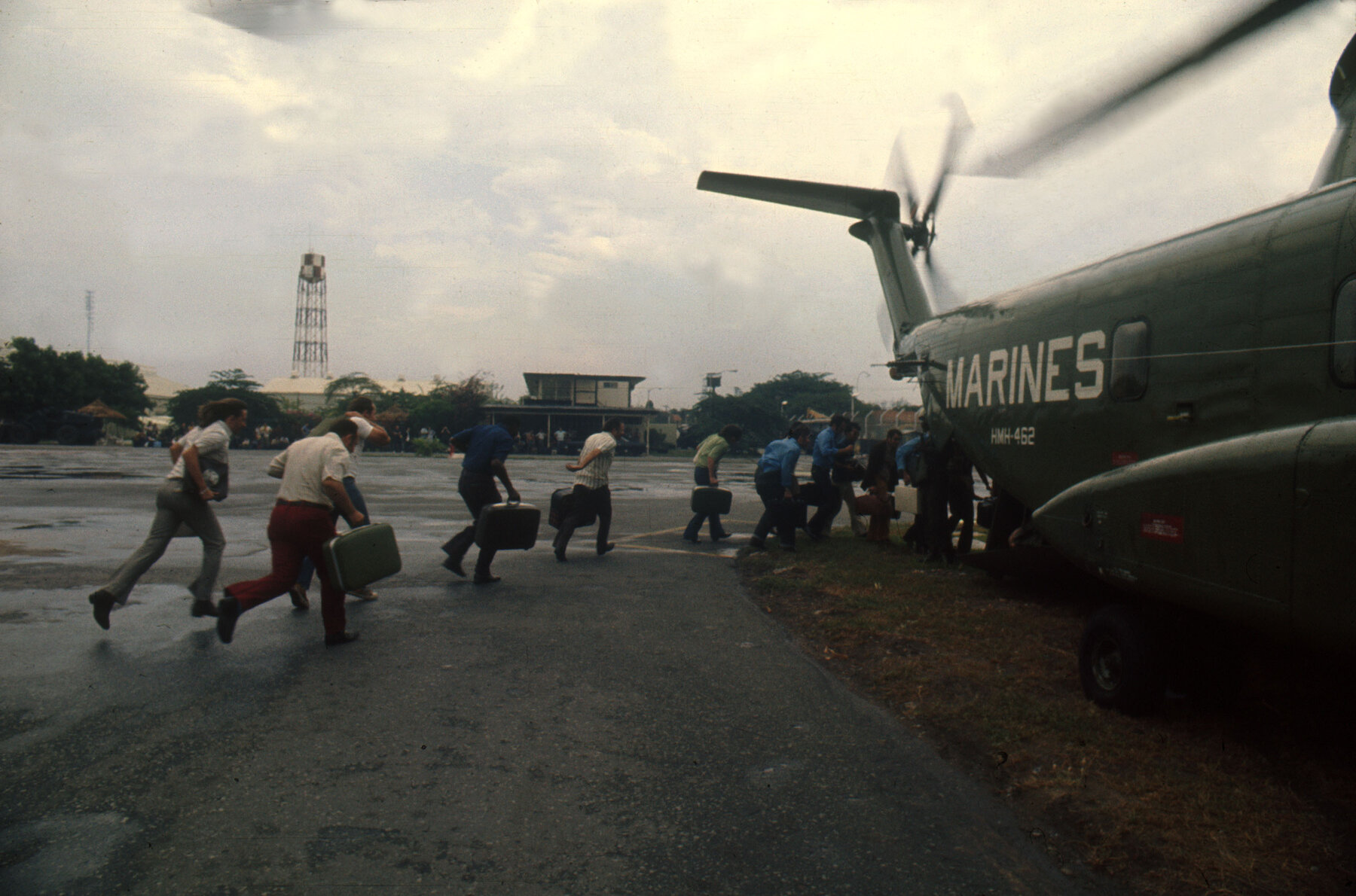 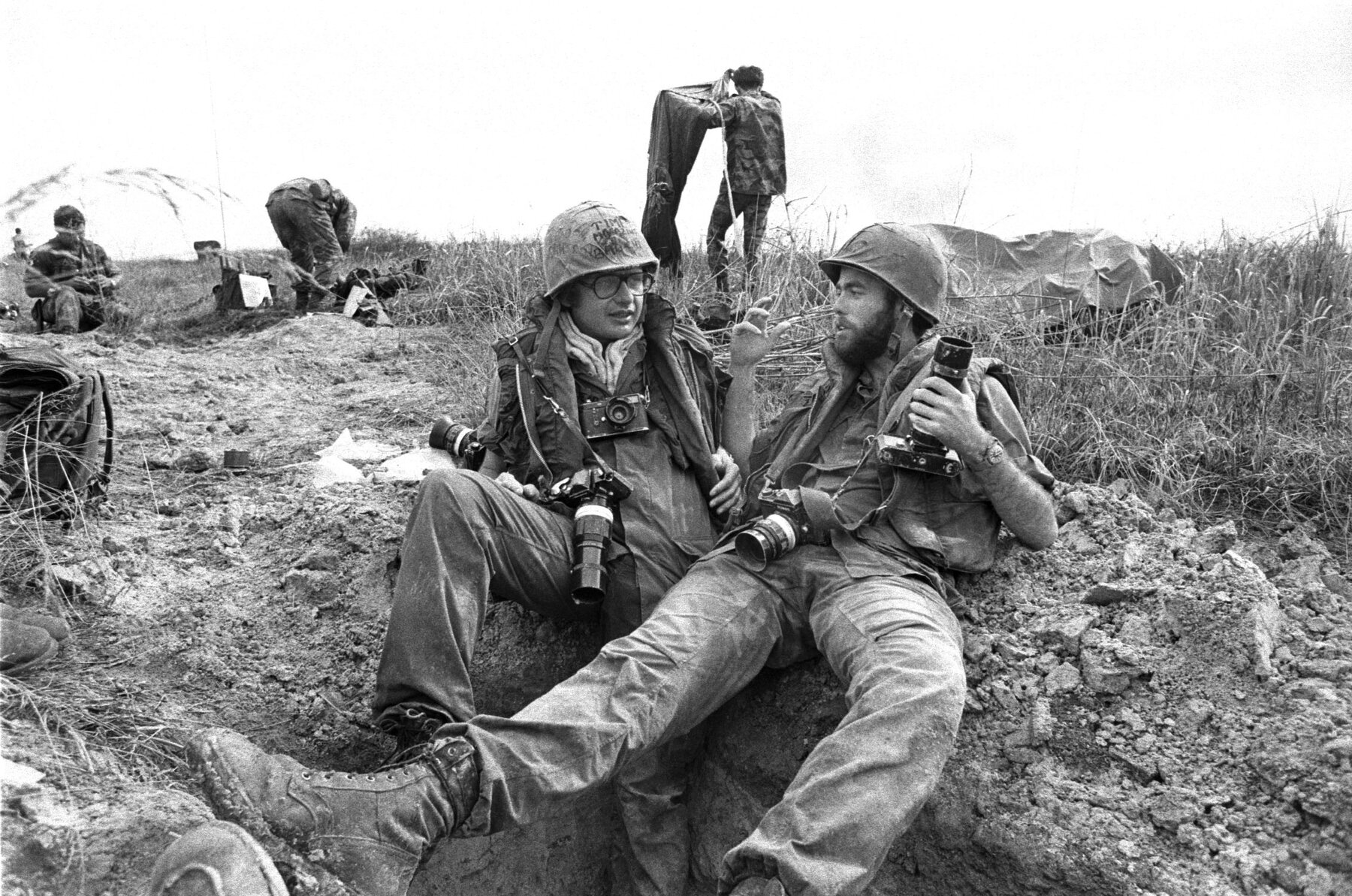 Chinook helicopters assisted in evacuating South Vietnamese soldiers and their families from Xuan Loc in April 1975.

Captured North Vietnamese being held under guard in Saigon in 1975.

U.S. Marines evacuated Americans and Vietnamese at Tan Son Nhut Air Base in South Vietnam as Saigon fell in April 1975.

Mr. Halstead placed his archive at the Briscoe Center for American History in Austin, Texas.

“Dirck Halstead was one of the great news photographers of his generation,” the center’s executive director, Don Carleton, said by email. “His body of work will be a source of important historical information far into the future.”

Dirck Storm Halstead was born on Dec. 24, 1936, in Huntington, N.Y., on Long Island. His mother, Leslie (Munro) Halstead, was an advertising executive, and his father, William, was a telecommunications engineer who held a number of patents for radio and television equipment.

At 15, when the family was living in Westchester County, N.Y., his parents gave him a Kodak Duaflex camera for Christmas.

“The thing that made the difference was they gave me a little darkroom outfit with it, which allowed you to make contact prints,” he said in an oral history recorded in 2010 for the Binghamton University Libraries. “And that was the thing that got me hooked.”

He began bringing the camera to class and was soon the high school’s de facto official photographer.

“By the time I was in my senior year in high school I was working on a part-time basis for a local newspaper” and getting $5 per picture, he said. At about the same time, that newspaper’s owner, Carll Tucker Jr., began acquiring other papers in the area.

“All of a sudden I was shooting for seven newspapers,” Mr. Halstead said, “and I was the only photographer, so that $5 per picture started to multiply.”

At 17, he said, he was on a student trip to Guatemala when he found himself photographing a coup there and, as he put it, became “the youngest war correspondent Life magazine ever had.” He tried Haverford College but was more interested in photography than classroom study, and he left after a year to work in Dallas. Soon he was drafted, and he became an official photographer for the U.S. Army — “the best job I ever had,” he said, because it allowed him to roam all over the world.

After two years in the Army he joined U.P.I. He worked in Philadelphia, New York and Washington before drawing the Saigon assignment.

In 1972 he was one of a handful of photographers selected to accompany Nixon on his trip to China. That led to an offer to work for Time.

“I took the contract with them with the proviso that I wouldn’t have to do any more wars or any more politics,” he told The Jackson Hole Guide of Wyoming in 1995. “Ten days later I was back in Vietnam.”

His main beat for Time, though, ended up being the White House. He captured countless historic moments involving the presidents of the 1970s, ’80s and ’90s, including several attempted assassinations.

“In each case,” he said, “all that you’ve heard is true. Everything starts to move in slow motion, and it seems like it takes forever.”

He worked for Time for almost 30 years and shot some 50 covers for the magazine. One, which ran in 1998, was an accident, and a feat of memory.

Mr. Halstead had a theory that every image lingers like “photographic lint on the mind of the photographer,” as he put it, whether or not the image was published. When the scandal involving President Clinton and Ms. Lewinsky broke in early 1998, Mr. Halstead had a vague memory of having seen Ms. Lewinsky’s face before. He hired a researcher to go through thousands of images he had shot in the past few years, and he was rewarded: The researcher found a shot Mr. Halstead had taken in 1996 at a gathering at the Mayflower Hotel in Washington, with Mr. Clinton, his back to the camera, embracing the smiling Ms. Lewinsky.

When the scandal involving President Bill Clinton and Monica Lewinsky broke in early 1998, Mr. Halstead had a vague memory of having seen Ms. Lewinsky’s face before. He was right: He had photographed her with President Clinton in 1996.Credit…Dirck Halstead/Liaison Agency via Getty Images

The shot ended up on the cover of a special report that Time published in August 1998. The Austin American-Statesman, recounting the tale in 2007, said the story of the picture has become “a case study for photojournalists about the importance of archiving images.”

Though Mr. Halstead did much of his work in the era of film and darkrooms, he was interested in the new technologies of the digital age, and in 1997 he started an online magazine, Digital Journalist, about the new types of photography and storytelling that were emerging. In 2006 he published a memoir, “Moments in Time: Photos and Stories From One of America’s Top Photojournalists.”

Mr. Kennerly, a Pulitzer Prize winner, said Mr. Halstead was a mentor to many.

“He was a star photographer, but he was very unselfish about coverage,” he said. “He was very helpful not only to me, but to tons of other photographers.”

Mr. Halstead, who lived in Boquete, was married and divorced three times. He is survived by a sister, Anne MacPherson.

“Dirck Halstead’s technical skill as a photographer was greatly enhanced by his deep intellectual curiosity about the people and events he documented with his camera,” Dr. Carleton of the Briscoe Center said. “Dirck made an effort to know as much as he could about his subjects, which gave him the knowledge to recognize that moment when a picture would most likely be newsworthy. Hence his success at shooting so many photographs that made the cover of newsmagazines.”

Not many journalists win a prize for taking a picture of other journalists, but Mr. Halstead did. In 1978 he won the top prize in the annual awards competition of the New York Press Photographers Association for a picture he had taken while shooting for Time during the July 1977 blackout. It was an image of the newsroom of The New York Times.

Mr. Halstead in 2019 in Boquete, Panama, where he lived. Though he did much of his work in the era of film and darkrooms, he was interested in the new technologies of the digital age.Credit… BT Corwin
Tags
Had Sai̇d That Ti̇me Vi̇etnam