WARSAW — Vice President Kamala Harris called Thursday for an investigation into whether Russia had committed war crimes in Ukraine during a visit to a key NATO ally that has taken in more than one million refugees from the invasion.

President Andrzej Duda of Poland, standing beside Ms. Harris at a joint news conference in the capital Warsaw, said his country needed more direct assistance from the United States to support Ukrainians fleeing the war.

They both spoke after a meeting in which Ms. Harris sought to fortify the strong U.S. partnership with Poland, her top aides said, even after American officials said they were blindsided by a Polish offer to provide jet fighters to Ukraine, which Washington rejected out of fear that such a move could escalate the conflict.

The statement, one of the more forceful from a top Biden administration official describing Russia’s aggression, was part of an effort to portray a unified front with Poland, a NATO ally.

As the highest-ranking U.S. official dispatched to Eastern Europe since Russia attacked Ukraine, Ms. Harris’ visit to a country on the front lines of the war’s fallout further solidified her rise from a relative novice on the global stage to a top diplomat dealing with an international crisis.

Ms. Harris arrived in Poland a day after Poland’s surprising offer on Wednesday to hand over Russian-made MIG fighters to the United States so they could ultimately be transferred to Ukraine. But the Biden administration turned it down, trying to avoid anything that could be viewed by Moscow as escalation of U.S. or NATO military involvement in the war. 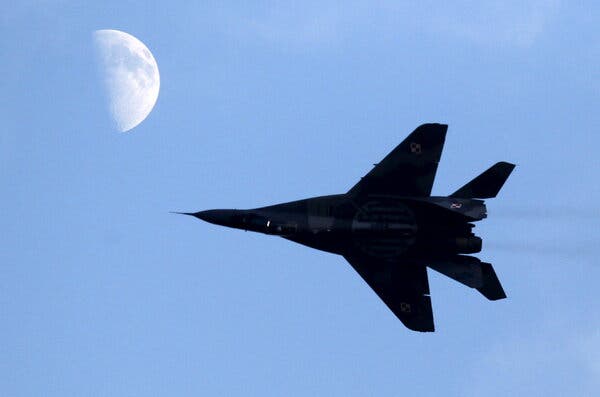 Poland’s proposal added another wrinkle to an already high-stakes diplomatic trip meant to reassure NATO allies. Ms. Harris echoed the Pentagon’s position that the fighter jets offer was not tenable during her closed-door meeting with Polish leaders, according to a senior administration official, and later told reporters the United States was “prepared to defend every inch of NATO territory.

Ms. Harris was referring to the ongoing investigation by the United Nations Commission of Inquiry when she called for a probe into Russia’s attacks, one of her officials later told reporters.

Pressed at the news conference about why Poland moved forward with the jet fighter offer without consulting the United States, Mr. Duda said his government was responding to a request from Ukraine. The Ukrainians have also asked NATO to impose a no-fly zone over their country to counter the threat from Russian military aircraft, but the alliance has so far refused to do so.

One senior U.S. official, however, said the fighter jets would not be as effective for Ukraine as antiaircraft systems like Stinger missiles. Those systems have hampered Russia’s freedom to move in the air, while Ukraine’s anti-armor weapons have impaired freedom of maneuver on the ground.

Still, some members of Congress have called on the Biden administration to deploy more weapons to Ukraine. Senator Mitt Romney, Republican of Utah, said the transfer of the aircraft from Poland to Ukraine would prevent further bloodshed.

“People are dying,” Mr. Romney said. “We need to get this aircraft immediately to the people of Ukraine. That’s what they are asking for.”

While the United States is against facilitating the transfer of the fighter jets, Ms. Harris’s top aides pointed to the decision to deploy two Patriot missile systems and roughly 4,700 American troops to Poland as evidence of the administration’s support for the country.

Still, the Russian attack has led roughly 1.3 million people to flee Ukraine for Poland so far, prompting the Polish government to propose paying citizens and organizations that host them about 250 euros, about $275, per month. Mr. Duda seized the moment with Ms. Harris to call on the Biden administration to do more to help with refugees.

Refugees from Ukraine arriving at the reception center in a former school in Lodyna, near the border crossing in Kroscienko, Poland.Credit…Maciek Nabrdalik for The New York Times

He said he asked the vice president in their closed-door meeting to speed the processing of Ukrainian refugees who have relatives in the United States. Without more help from Western allies and the United Nations, he added, “this will end up in a refugee disaster.”

On the ground. As the war in Ukraine enters its third week, the Russian advance appears to have slowed. At the same time, destruction across Ukraine is growing, as Russia increases its targeting of residential areas and civilian infrastructure with long-range missiles.

No agreement. The Foreign Ministers of Ukraine and Russia met in Turkey, for the first time since the start of the war, and failed to stop the fighting. Foreign Minister Sergey V. Lavrov of Russia declared that a cease-fire was never up for discussion.

Chernobyl nuclear facility. The International Atomic Energy Agency said that the defunct power plant had been disconnected from electricity, though there was no need for immediate alarm. A power loss could affect the facility’s ability to keep the water that cools radioactive material circulating and lead to safety issues.

On the diplomatic front. Vice President Kamala Harris visited Poland, where she repeated U.S. pledges to “defend every inch of NATO territory,” while sidestepping questions about Poland’s offer, rejected by the Pentagon, to hand fighter jets over to the United States to transfer to Ukraine.

His plea echoed that of resettlement organizations in the United States, which have called on President Biden to more rapidly repair a refugee system that was dismantled by the previous administration.

The United States welcomed more than 11,400 refugees in fiscal year 2021, which ended last September. That was the lowest number in the history of the modern refugee system. The administration has admitted nearly 6,500 refugees in the last five months, according to the State Department.

“If Europe experiences the largest refugee crisis since the second world war, the U.S. has an opportunity to resume not just its global leadership but global humanitarian leadership,” said Krish Vignarajah, the president of Lutheran Immigration and Refugee Service, a U.S. resettlement agency.

Ms. Vignarajah said the U.S. embrace of Ukrainian refugees was particularly crucial “when countries that have far fewer resources like Poland have stepped up and absorbed a million refugees.”

Ms. Harris said the United States would send an additional $53 million in new humanitarian assistance to assist refugees in the region through the United Nations. The U.S. has provided roughly $159 million in humanitarian funds to Ukraine since October of 2020, according to the White House. During the joint press briefing with Mr. Duda, Ms. Harris also pointed to the $13.6 billion in emergency aid for Ukraine and European allies that passed the House of Representatives on Wednesday.

The vice president did not directly answer a question on whether the United States would commit to admitting a specific number of Ukrainian refugees.

The high-profile trip could serve to brandish the foreign policy credentials of Ms. Harris, who entered the White House widely seen as a potential front-runner for the Democratic presidential nomination in 2024, if President Biden does not run again.

Ms. Harris’s supporters last year grew concerned over that she was being tasked with challenges — such as addressing the root causes of migration — that could not be solved within four years. Some of her early work on addressing the poverty and corruption in Central America prompted a backlash from conservatives and Democrats alike.

She was criticized by immigration advocates when she traveled to Guatemala last year and told migrants “do not come” to the United States. But in recent months, the vice president has asserted herself on the global stage, traveling to France, Honduras, Germany and Poland. On Friday, she will visit Romania.

“I think Harris had a tough first year but it seems to me she’s starting to come into her own,” Mr. Shapiro said. Her recent trips were “real opportunities to demonstrate statesmanship and to show that she can serve the traditional role of U.S. vice presidents as someone who can carry the president’s message in an authoritative way.”

Tags
All Sai̇d That Ukraine War