The Major League Baseball season is a grind. First, there’s spring training, which is normally six weeks long. Then, there’s the regular season of 162 games over six months. And, if a team is so lucky, a run to the World Series takes up all of October. 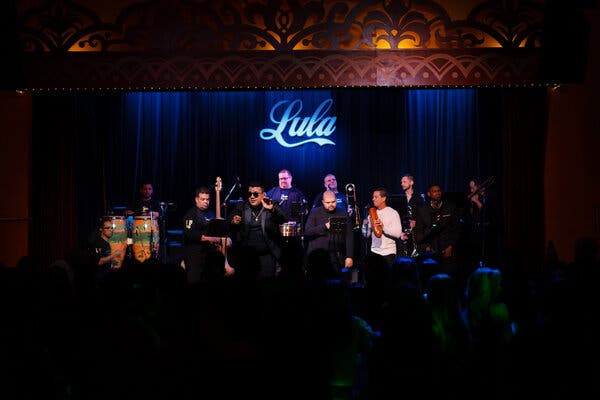 As a baseball reporter with The Times, I’ve seen people in the sport use a variety of different methods to cope with the rigors of the schedule, travel and competition: card games in the clubhouse, tons of sleep, ice cream after victories. Few, though, are as loud — or as public — as Charlie Montoyo’s escape.

Montoyo is the manager of the Toronto Blue Jays, one of the best and most exciting teams in M.L.B. Growing up in Puerto Rico, he was always around baseball and salsa music. He learned how to play percussion instruments — the bongos, timbales, congas, güiro — by watching others and playing along to classic songs.

After the Blue Jays hired him ahead of the 2019 season, videos emerged of the instruments in his office at the Rogers Centre. Montoyo, 56, also started going to Lula Lounge, a salsa club west of downtown Toronto, in his free time and performing onstage with bands. How many other head coaches or managers in professional sports do this? I thought that a photographer and I needed to be there the next time he went so we could document this colorful scene and explain how it is part of the larger vibrant Latin American culture in the sport.

“For that generation, salsa was very influential on our island,” said José Berríos, 28, the Blue Jays starting pitcher from Puerto Rico, referring to the generation of his father, who is close to Montoyo’s age. “Big artists came from there. Charlie enjoys not just the music but playing it and singing it.”

Before games, Montoyo plays along to salsa songs he cues up on the laptop or TV in his office. “I hear it all the time,” said the Blue Jays pitcher Jordan Romano, 29, an Ontario native. “And we’ve got salsa music on the plane. He loves it. He’s always upbeat, like his music.”

The pandemic delayed my plans of watching Montoyo play for two years, locking down the salsa club for a while and forcing the Blue Jays to play most of their home games in the 2020 and 2021 seasons at a minor league stadium in Buffalo, N.Y., or their spring training facility in Dunedin, Fla.

But when the club reopened and the U.S.-Canada border restrictions allowed the Blue Jays (and a certain reporter) to return, Montoyo was back onstage at Lula Lounge. He came by after a recent Blue Jays win over the Houston Astros, a game he was ejected from for arguing a called third strike to the star first baseman Vladimir Guerrero Jr.

Montoyo taking a musical break in his office at the Rogers Centre in Toronto.Credit…Brendan Ko for The New York Times

When the Blue Jays visit their division rival the Yankees in the Bronx, Montoyo runs the two miles from Yankee Stadium to Casa Amadeo, an iconic place for salsa lovers and Puerto Rican immigrants. It is the oldest, continuously occupied Latin music store in New York. There, Montoyo buys CDs, which he converts into audio files for his laptop, and runs back to the ballpark with them in a bag tucked under his arm.

If the Blue Jays are going to fulfill their lofty expectations this season, the team in the Bronx poses a significant challenge. Their division, the American League East, is the toughest in baseball. If the 12-team postseason began today, three teams from the division — the Yankees, the Tampa Bay Rays and the Blue Jays — would be in. And the Boston Red Sox, who fell two games short of reaching the World Series last year, aren’t far behind.

The Blue Jays were a popular World Series pick when they entered this season, Montoyo’s fourth as Toronto’s manager. Made up of a core of young stars, the once-rebuilding team broke out in 2020 and reached the playoffs. Even though the squad fell one win shy of another postseason appearance last season, the Blue Jays, who last won a World Series in 1993, still seemed to be trending up.

Two Blue Jays have performed better this season than the free agents they replaced. Kevin Gausman, who replaced the 2021 American League Cy Young Award winner Robbie Ray, leads a rotation that has been a top 10 unit in baseball. The second baseman, Santiago Espinal, who replaced the 2021 All-Star Marcus Semien, is a key part of a lineup that has been one of the best.

That doesn’t mean there aren’t holes to be filled. The bullpen, for example, ranked 16th in M.L.B. in earned run average entering Friday. Perhaps parts of the team will look different after the Aug. 2 trade deadline — it is a long season, after all — but the soundtrack will remain the same with Montoyo in charge: salsa.

A headpiece in the studio of Cannupa Hanska Luger.Credit…Cara Romero for The New York Times

This week’s Trans Canada section was compiled by Ian Austen, our Canada correspondent.

A Nicaraguan American from the Washington area, James Wagner is a national baseball reporter and has covered the sport since 2012. Follow him on Twitter at @ByJamesWagner.

How are we doing?
We’re eager to have your thoughts about this newsletter and events in Canada in general. Please send them to nytcanada@nytimes.com.

Like this email?
Forward it to your friends, and let them know they can sign up here.

Tags
Salsa That This Ti̇me Who