Times Insider explains who we are and what we do, and delivers behind-the-scenes insights into how our journalism comes together.

This weekend’s edition of The New York Times Magazine isn’t the first to be almost entirely devoted to a single article, but it may be the fastest one that has ever come together.

Jake Silverstein, the magazine’s editor in chief, wanted to address the war in Ukraine in a manner that had impact. “We just needed to figure out a way to cover it,” said Kathy Ryan, the magazine’s photo director.

The team landed on “Citizens of Kyiv,” a 34-page photo essay that showcases about two dozen of the ordinary people — bakers, doctors, playwrights, students — who continue to live in Kyiv amid the frequent bombings by Russian forces. The feature was published online earlier this month and appears on the cover of this weekend’s magazine. The effort spanned four countries and multiple cities, and included contributions from about a dozen people, including a photographer, a reporter, translators, photo editors, designers and magazine editors. It was produced in just under two weeks.

Ms. Ryan and Shannon Simon, a contributing photo editor for The Times, reached out to Alexander Chekmenev, a renowned Ukrainian portrait photographer who for many decades has been documenting life in Kyiv, where he has lived since 1997. His intimate knowledge of the city and its people was invaluable.

Within hours of accepting the assignment on Saturday, March 5, Mr. Chekmenev was on the streets of Kyiv capturing photographs.

While he wandered the city, seeking out portrait subjects, Anna Pechenina, who served as his translator (for communication with his English-speaking editors) and fixer — a local who assists a journalist in arranging a story — was making phone calls from Romania, where she had fled after the invasion. She was lining up portraits with people whose perspectives they wanted to represent, like a young, single mother and her 2-year-old son.

One of the biggest challenges was access. Ukraine is divided into two parts: the Left Bank, which sits east of the Dnieper River, and the Right Bank, which sits west of it. Kyiv is on both sides of the Dnieper, and Mr. Chekmenev wanted to photograph people on both banks, which took planning. He also had to navigate the city’s 8 p.m. curfew.

But even before nightfall, few people were on the streets. Amid the air raids, many were sheltering underground in basements, bomb shelters or the subway, venturing out only a few minutes a day to get food and supplies.

After taking their photographs, Mr. Chekmenev took down people’s phone numbers and sent them to C.J. Chivers, a staff writer for the magazine, who wrote the feature’s text. Mr. Chivers followed up with the photo subjects in conference phone calls from his house in New England — with the aid of Ali Kinsella, a translator fluent in Ukrainian, in Chicago — to conduct interviews. Mr. Chivers did around 20 interviews over just a few days, chasing the last person up until hours before the final deadline.

Mr. Chivers, who had previously spent time in Kyiv when he worked in The Times’s Moscow bureau, said he “drew from many memories” for the article. “I hoped to show a people whose futures and whose safety were under grave threat, as they adapted, one way or another, to a war they did not choose,” he said.

Biden’s trip comes to an end. President Biden offered a message of unity and support for Ukraine in an address in Warsaw as he wrapped up a three-day trip to Europe. The speech came amid reports that the Ukrainian city of Lviv just across the Polish border had been hit by missiles.

On the ground. Ukraine’s counteroffensive appeared to be gaining momentum, with the military hitting Russian targets and claiming territorial gains. Their progress underscores Russia’s flawed execution of the invasion, with supply shortages and demoralizing conditions for its soldiers.

Russia signals a shift. Russia’s Defense Ministry said the goals of the “first stage of the operation” had been “mainly accomplished,” and that it would now focus on securing Ukraine’s eastern Donbas region. The ambiguous statement could signal a possible recalibration of its war aims.

Weapons of mass destruction. Dmitri A. Medvedev, the vice chairman of Russia’s Security Council, said the country was prepared to use nuclear weapons if its existence was threatened. NATO allies earlier agreed to provide Ukraine with equipment and training to deal with fallout from a possible Russian attack using chemical, biological or nuclear weapons.

Ms. Simon, who shepherded operations from Connecticut — often at 3 a.m. Eastern time, given the six-hour time difference from Ukraine — and Ms. Ryan selected and edited the portraits. Ms. Ryan said that Mr. Chekmenev “brought a powerful sense of seeing the landscape of the face” and used lighting to emphasize the emotions of those he was photographing: The photos are lightest around the subject’s face and fade to darkness near the edges of the frames, offering just glimpses of each person’s surroundings.

“A lot of it was about wanting to be sure that you felt like you were connected to them through that photo,” Ms. Simon said.

On the magazine’s cover is Anna Malinina, 30, a private English tutor for children who took up residence in a subway station. Hers is just one of the many stories “Citizens of Kyiv” tells. “I’m proud to be able to put ordinary people on the cover of such a big magazine,” said Mr. Chekmenev, who has continued to photograph those who have remained in Kyiv. “Honestly, they all deserve to be on the cover. There’s no one here who’s not worth hearing from right now.” 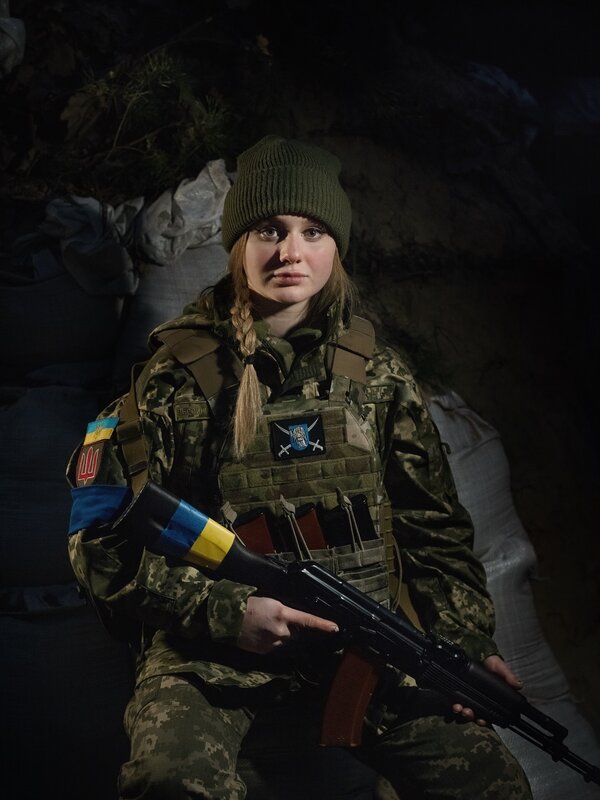 Portraits of fortitude, desperation and resolve in a city under attack.