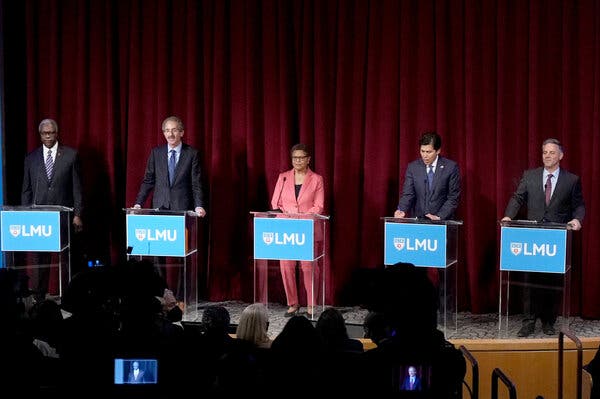 In a little over a month, voters will decide who should run Los Angeles, America’s second-largest city.

On June 7, residents will pick from a crowded field of candidates vying to replace the city’s current mayor, Eric Garcetti, who has termed out. The election is a primary, and if no single candidate gets a majority of votes, a runoff will be held on Nov. 8.

My colleagues have previously written about the many crises that Los Angeles’s next mayor will face, including a rise in violent crime, the homelessness crisis and the ever-present threat of the coronavirus. The city’s problems have always existed, but in recent years have grown “staggering and existential,” they reported.

There are 12 candidates on the ballot, and five of the leading candidates faced off in a debate on Sunday night hosted at Cal State Los Angeles. It was one of the last major events before Angelenos begin receiving their mail-in ballots and start casting their votes.

The candidates argued about pollution, affordable housing, electric cars, crime on public transit and more. You can watch the full debate here, or read coverage from The Los Angeles Times or The University Times, the student newspaper at Cal State L.A.

Despite the high stakes, 39 percent of likely voters surveyed last month were unsure about whom they were going to support. If you’re in that camp, I’m here to help. Below is some background on the leading candidates, as well as resources to learn more about them.

If you read one story, make it this

The rest of the news

Today’s tip comes from William Jordan, who recommends “Point Reyes National Seashore for its beauty, its wide open spaces, its rolling landscape, and its wildlife.”

Tell us about your favorite places to visit in California. Email your suggestions to CAtoday@nytimes.com. We’ll be sharing more in upcoming editions of the newsletter.

Tim Vincent, left, and Michael Taylor walked down the aisle with their dog Beau at their April 9 wedding ceremony on the rooftop of Flannery Exchange in Palm Springs.Credit…Roger Kisby for The New York Times

And before you go, some good news

Before they met at a party in Oakland in 2011, Michael Taylor and Tim Vincent both thought they would be single for life.

But the two men were surprised by how quickly they felt comfortable with each other. And they valued being with someone who was also Black and close in age.

“I didn’t want to have to explain what my life was about,” Vincent, 65, told The Times.

The couple wed last month in Palm Springs. Read more of their love story in The Times.

Thanks for starting your week with me. I’ll be back tomorrow. — Soumya

Jack Kramer contributed to California Today. You can reach the team at CAtoday@nytimes.com.