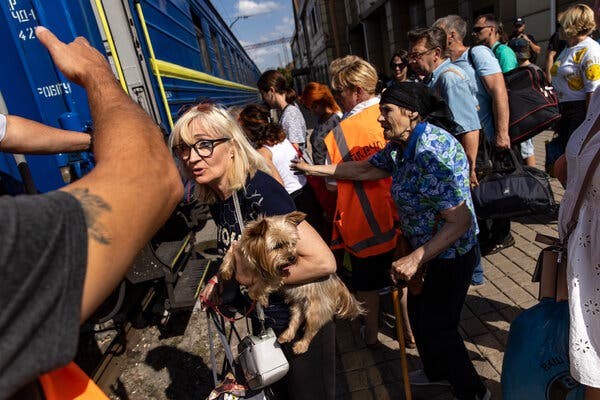 Ukraine’s president urged hundreds of thousands of people living in the east to start leaving.Credit…David Guttenfelder for The New York Times

Volodymyr Zelensky, the Ukrainian president, urged civilians in the eastern Donbas region to evacuate. The more people leave the Donetsk region now, he said, “the fewer people the Russian Army will have time to kill.”

His statement is the first time the Ukrainian government has issued such a broad evacuation order. By doing so before winter, Kyiv sought to give people time to move — and to prevent an unmanageable crisis later. Russian bombardment has destroyed key infrastructure needed to deliver heat and electricity.

Zelensky’s comments followed the killing of Ukrainian prisoners of war in an explosion on Thursday at a detention facility in the Russian-occupied part of Donetsk. At least 50 prisoners were killed. Many of them had surrendered after the Russian siege of the Mariupol steelworks and were considered national heroes in Ukraine.

Ukraine and Russia have blamed each other for the explosion, with the Ukrainian authorities calling for an international investigation. Russia said yesterday that it would allow the International Committee of the Red Cross to visit the site, but the organization said it had still not been granted access, adding that this was an obligation under international law.

Context: The Russians control around 60 percent of Donetsk, and Ukrainian officials have warned that Moscow will step up efforts to take the rest of the region, as it moves ahead with plans to annex much of Ukraine.

Analysis: Ukrainians have stabilized eastern defensive lines, and Moscow has failed to make significant advances in weeks. But Russian strikes continue to kill civilians daily, and hundreds of thousands still live in Donetsk.

Nancy Pelosi said she was eager for Congress to be part of President Biden’s Indo-Pacific strategy.Credit…Haiyun Jiang/The New York Times

Biden administration officials said they expected her trip to include a stop in Taiwan, which would be the highest-level visit by an American official in 25 years. But Pelosi has not said whether she will go to the self-governing island.

Our Coverage of the Russia-Ukraine War

Speculation about that possibility has jangled nerves in both Beijing and Washington. China, which considers Taiwan its territory, has issued increasingly sharp warnings in recent days that a Pelosi visit would provoke a response, perhaps a military one.

Administration officials have conceded that they do not know the extent to which China is willing to risk a confrontation.

Details: Pelosi had proposed a trip to Taiwan earlier this year. (It was postponed because she contracted the coronavirus.) She was expected to arrive in Singapore today, and she has said that she will also visit Malaysia, South Korea and Japan.

Background: The Biden administration has grown increasingly worried that China’s leader, Xi Jinping, might try to move against Taiwan within the next year and a half. During a two-hour phone call on Thursday, Xi warned Biden against “playing with fire” on Taiwan, according to a Chinese government statement that did not explicitly mention Pelosi.

Military: In the past year, China’s military planes have increasingly probed Taiwan’s airspace. In June, Beijing raised the stakes by declaring jurisdiction over the Taiwan Strait. And on Saturday,China’s military said it would conduct drills with live ammunition off Fujian Province, about 80 miles from Taiwan.

A disabled Nigerian street vendor in Italy was beaten to death on Friday. Witnesses filmed the afternoon attack, which happened on a major shopping street and lasted less than four minutes. But no one intervened.

The murder of Alika Ogorchukwu has shocked Italians. Videos have been shared thousands of times on social media, and editorials in major newspapers lamented the “dusk of civilization.” The attack spawned fresh debate over racism, but investigators said they do not believe the crime was racially motivated.

Politicians have also denounced the crime. But concerns have emerged that the murder could be used as a sparring point ahead of national elections in September; the right-wing coalition has already singled out immigration as an issue.

Attack: Ogorchukwu unsuccessfully pitched his wares to an Italian, Filippo Ferlazzo, and his girlfriend. Then, Ogorchukwu walked away. Ferlazzo followed him and used Ogorchukwu’s crutch to beat him to death.

Region: The attack happened in Civitanova Marche, a seaside town on the Adriatic Coast. In February 2018, a right-wing sympathizer shot and wounded six African immigrants in nearby Macerata. Two years earlier, a Nigerian man was killed in Fermo, which lies just to the south, after he tried to defend his wife from racist slurs.

The Hef Bridge, a landmark in Rotterdam, survived Germany’s bombing of the city during World War II.Credit…Ilvy Njiokiktjien for The New York Times

Jeff Bezos has been building a $500 million yacht in the Netherlands. To get it to sea, the city of Rotterdam would have to temporarily dismantle an unused bridge. Earlier this year, the city briefly gave the shipbuilding company its approval.

But after an uproar, and threats of egg-throwing, the company withdrew its request. The retreat was not only “a victory of the masses over a billionaire,” David Segal writes in The Times. “It was an opportunity to see Dutch and American values in a fiery, head-on collision.”

The Saturday Profile: A South Korean child psychiatrist, Dr. Oh Eun-young, is trying to destigmatize therapy by broadcasting her appointments on television. Her mantra: “There is no problem child, only problems in parenting.”

It’s full of “generally upbeat songs,” our pop music reporters write. It embodies decades of dance music. And the album might own the rest of the summer.

“All 16 songs hail from someplace with a dance floor — night clubs, strip clubs, ballrooms, basements, Tatooine,” Wesley Morris writes in an album review. “Most of them are steeped in or conducted entirely with Black queer bravado.”

“And on nearly every one,” Wesley continues, “Beyoncé sounds like she’s experiencing something personally new and privately glorious: unmitigated ecstasy. It takes different forms: bliss, obviously; but a sexy sternness, too. The exercise of control is as entertaining on this album as the exorcism of stress.”

Ligaya Mishan wrote a beautiful essay about her marriage. Read it here, then try this bright and summery citrus-chile fish.

Our editors recommend a genre-bending Spanish murder mystery, a spy thriller set after the fall of the Berlin Wall and seven other books.

Prague is emerging from the pandemic with less touristic gimcrackery and more local flavor.

That’s it for today’s briefing. Thanks for joining me. — Amelia

P.S. The Times received a record number of Emmy nominations.

The latest episode of “The Daily” is about conservative Latinas in the U.S. 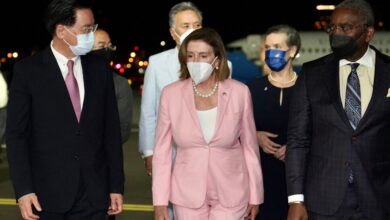