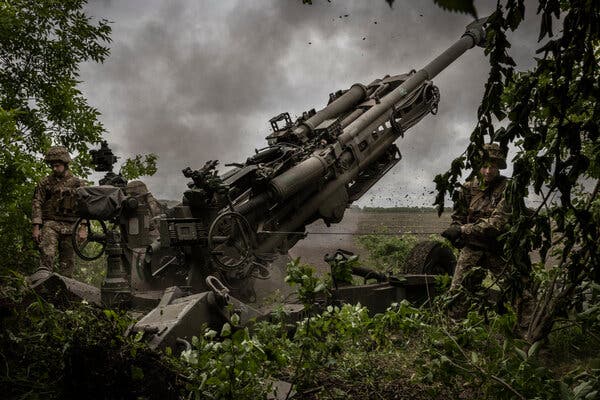 Ukrainian and Russian forces traded fresh blows yesterday near Sievierodonetsk, military authorities and analysts said, as Moscow renewed its push toward the city, one of the last major Ukrainian strongholds in a key part of the east. Follow the latest updates from the war.

As the war reaches the end of its third month, Moscow has narrowed its military objectives to capturing small portions of Ukraine, with its forces working their way east to west. Capturing Sievierodonetsk would give Russian forces control of Luhansk, one of two provinces that make up the Donbas region in Ukraine’s east.

Western nations have substantially increased their aid to Ukraine, seeking to tip the balance as the conflict grows more protracted and costly. Late last week, the U.S. Senate approved $40 billion in aid to Ukraine. Russia has warned that Western nations will pay unspecified consequences for helping Ukraine.

The first case of the monkeypox virus this year in the United States was found last week at Massachusetts General Hospital in Boston.Credit…CJ Gunther/EPA, via Shutterstock

Biden raises the alarm about monkeypox

President Biden warned yesterday that monkeypox, a viral infection spreading around the world, was something “that everybody should be concerned about.” He added that continued transmission would be “consequential.”

The monkeypox virus, which is only occasionally fatal, spreads through body fluids, skin contact and respiratory droplets. Its common symptoms include a distinctive rash, fever and body aches. The speed at which it’s spreading has raised fears of another pandemic that would strain health systems already stretched thin by Covid-19.

Public health officials in the U.S. said that the country had the resources to keep monkeypox at bay. In the event of an outbreak, the U.S. has stockpiled millions of doses of smallpox vaccines, which are generally effective at preventing monkeypox infection, as well.

Details: As of Saturday, 92 cases and 28 suspected cases had been identified in 12 countries, including Britain, Spain, Austria and Portugal, outside of those African nations where it is endemic.

Health mystery: A coronavirus outbreak at a mink farm in Michigan in 2020 was the first, and so far only, known instance of possible animal-to-human transmission in the U.S. But how did it happen?

Governing remains a strain in Israel

Israel’s latest government crisis was temporarily resolved yesterday after the lawmaker Ghaida Rinawie Zoabi, who quit the governing coalition late last week, agreed to return, allowing it to snatch back its tiny majority.

Rinawie Zoabi, a member of Israel’s Palestinian minority from the left-wing party Meretz, resigned on Thursday, after saying that the government was not committed to improving conditions for Arab citizens, who make up a fifth of the country’s population.

Facing “massive pressure” from the leaders of local Arab councils, she reversed her decision, she said in a statement, in part to avoid the possibility of a government in which the extreme rightist politician, Itamar Ben-Gvir, would oversee the police force.

The coalition, an ideologically diverse alliance of eight parties with clashing agendas, is now back to controlling 60 seats in the 120-seat Parliament, a position that allows it to hang on to power but that makes governing difficult. Its disintegration would send Israelis returning to the polls for the fifth time in four years.

Coalition: The government, led by Naftali Bennett, is made up of parties from the political right, left and center and includes, for the first time, a small Islamist party. Those partners came together mainly over a shared desire to oust Benjamin Netanyahu as prime minister.

Haitians were the first people in the modern world to free themselves from slavery and create their own nation. Yet they were forced to pay for their freedom yet again — in cash.

Cannes brings out the stars

At the Cannes Film Festival, expect glamour, minutes-long standing ovations and passionate boos. The maximalist festival kicked off last week and will run until Saturday. Here’s what you need to know.

Why do people care? Cannes has started the careers of many filmmakers, like Quentin Tarantino, who debuted “Pulp Fiction” at the festival. Winning a prize can help an art film secure wider distribution and recognition during awards season. “Parasite,” which won the top prize at Cannes in 2019, went on to win best picture at the Oscars.

Are any big movies premiering? For the cinephiles, films by David Cronenberg, Claire Denis and Park Chan-wook are in the running for the Palme d’Or, the top prize. As for blockbusters, “Top Gun: Maverick” — the sequel to Tom Cruise’s 1986 hit — and Baz Luhrmann’s Elvis biopic are also being screened.

What else is happening? A screaming woman protesting sexual violence in Ukraine crashed the red carpet. Days before, at the opening ceremony, Volodymyr Zelensky, the Ukrainian president, gave a virtual address during which he quoted Charlie Chaplin’s “Great Dictator”: “The hate of men will pass, and dictators die, and the power they took from the people will return to the people.”

This sheet pan bibimbap is easy, delicious and highly versatile.

It’s time to pick your summer reading list. Here’s how to get started.

In a new adaptation of Sally Rooney’s novel “Conversations With Friends,” an aspirational home plays a starring role.

Here’s today’s Mini Crossword, and a clue: Last amendment in the Bill of Rights (five letters).

And here’s today’s Wordle and the Spelling Bee.

That’s it for today’s briefing. See you tomorrow. — Natasha

P.S. Melina Delkic, formerly the writer of the Asia Morning Briefing, is joining the Express desk as a senior staff editor.

The latest episode of “The Daily” is on long Covid.

Tags
Part That Ti̇me Ukraine Which