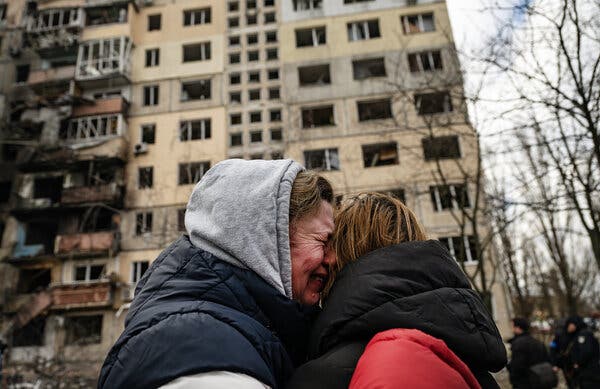 Residents of a shelled building in Kyiv, Ukraine, comforted each other yesterday as Russian forces kept bombarding the city.Credit…Lynsey Addario for The New York Times

The war in Ukraine entered an uncertain new phase as Russian forces widened their bombardment of Kyiv and other cities, and the U.S. warned China over its deepening alignment with an isolated Russia. Follow our live updates.

There were no breakthroughs, either at the negotiating tables or on the battlefield. But as the human cost of the war continued to grow, the flurry of developments suggested that people were groping for a way out of the crisis — or, failing that, for ways to prevent it from mutating into a wider proxy war.

Kyiv, the capital, was hit by a flurry of artillery strikes after days of fighting in its suburbs. Military experts warn that the battle for Kyiv could be drawn out and decisive. Some estimate it could take two weeks for Russian forces to encircle the city and at least a month of bloody, destructive fighting for them to take it. The Kremlin has insisted that “all plans” for the invasion will be fulfilled.

The situation on the ground in much of Ukraine remains horrific. Though hundreds of civilians have escaped the devastated port of Mariupol, some 400,000 people are trapped there without heat, food or clean water.

Talks: Ukrainian and Russian officials held another round of direct negotiations, adjourning without signs of progress, though they agreed to meet again today.

Quotable: António Guterres, the secretary general of the U.N., said Ukraine was “being decimated before the eyes of the world.” He warned of a calamitous cascade of world hunger and food inflation, given Ukraine’s role as one of the world’s foremost grain producers. The impact on civilians, Guterres said, was “reaching terrifying proportions.”

Albagir, a refugee from Sudan, and another refugee standing in the forest where they hid near the border of Poland and Belarus.Credit…Erin Schaff/The New York Times

Albagir, a 22-year-old man who fled war in Sudan, and Katya, a 21-year-old woman who escaped war in Ukraine, crossed into Poland at the same time. But their disparate experiences over the next two weeks underscore the inequalities of Europe’s refugee crisis.

Albagir was punched in the face, called racial slurs and left in the hands of a border guard who, Albagir said, brutally beat him and seemed to enjoy doing it. Katya wakes up every day to a stocked fridge and fresh bread on the table, thanks to a man she calls a saint.

Depending on which war a person is fleeing, the welcome will be very different. Ukrainian migrants can fly free across Europe on a Hungarian airline. They have been greeted by supporters waving Ukrainian flags in Germany. And they may stay in any E.U. country for up to three years.

But European governments have made it difficult for people fleeing conflicts in Africa and the Middle East to enter their countries — and sometimes use excessive force to keep them out.

Quotable: Watching the welcome for Ukrainians on a TV in a safe house in the Polish countryside, Albagir said he was almost in a state of shock. “Why don’t we see this caring and this love? Why?” he asked. “Are Ukrainians better than us? I don’t know. Why?”

Related: A family from India froze to death just yards away from crossing into the U.S. from Canada. Desperate migrants are trying their luck on the northern U.S. border.

After two years of largely containing coronavirus outbreaks, China’s zero-tolerance policy is being tested by the highly transmissible Omicron variant, which has prompted lockdowns in provinces across the country.

China’s strategy is one of containment. In response to even a single Covid case, officials may seal all the entrances to a store, an office building or even a convention center. Everyone inside must stay there for up to several days as they are tested for the coronavirus and sent into isolation if they are infected.

Unlike many Western countries, China can’t afford to lift restrictions. The country has low vaccination rates among older adults and far fewer intensive-care hospital beds per capita than most industrialized countries. A major outbreak could quickly overwhelm hospitals, especially in rural areas.

Response: Some residents are worried about the effects of lockdowns on their livelihoods. “My store is closed, but we still need to pay rent,” said one grocery store manager affected by a lockdown.

By the numbers: The seven-day average rate of new cases in mainland China, now at 1,584, has more than quintupled in recent days. Workers are corralling and testing millions of people every day, but the testing program is starting to be overwhelmed.

News From the U.S.

Treeplanting is booming as a way to fight climate change, uplift communities and restore biodiversity. Here’s how it could help, or harm, the planet.

On the front lines of climate change

Tina Stege is the climate envoy for the Marshall Islands, a Pacific country of roughly 60,000 people that is facing an existential threat from climate change. Stege spoke to David Marchese for The New York Times Magazine. This is a lightly edited excerpt.

Your country’s continued existence is dependent on the decisions of far more powerful, far less at-risk countries. How has your advocacy work affected your thinking about global power?

The way I was raised in my community was with this idea that when you protect those who are the most vulnerable in your community, you are protecting your entire community. This translates to the message we’ve had for the world on why they should care about the Marshall Islands: Climate change isgoing to affect everyone on this planet.

The latest report from the Intergovernmental Panel on Climate Change seemed to suggest that climate-change mitigation and adaptation need to be the global focus, more than trying to stay under 1.5 degrees of warming. What would adaptation look like for the Marshall Islands?

In the Marshalls, we’re two meters above sea level. It’s a small, low-lying atoll nation. We’re essentially one long beach. So adaptation for us is many things. It needs to be about responding to sea-level rise, that’s first and foremost.

But it’s also about water resources, because our aquifers are going to be inundated. We are coral atolls, and corals are dying. How do we live on an island where all the fish that we eat live off those corals?

Rapid worldwide decarbonization isn’t likely, for a variety of reasons. But is there a quickly achievable step that more countries could be taking that they’re not?

The G20 countries produce 80 percent of total emissions. Decarbonization within those countries is where the focus needs to be.

You’re already hearing from European leaders that they’re looking to decarbonize much more swiftly in response to the crisis in Ukraine. But we should see that same level of crisis response to decarbonization across all of the major emitters. It can be done. There needs to be that same sense that it is a true emergency.

This tahini-accented chicken dish accommodates any lurking root vegetables that need to be used up.

In “The Turning Point,” Robert Douglas-Fairhurst argues that 1851 changed Charles Dickens, and the world, forever.

“Comets,” a tale of repressed romance from Georgia, is among our picks for the best international movies to stream right now.

P.S. The Times introduced a channel on Telegram to deliver news about the war in Ukraine.

The latest episode of “The Daily” is on how Russians see the war in Ukraine.