Good morning. We’re covering the ongoing destruction of Mariupol, Ukraine, the search for survivors in a Chinese plane crash and lifting of Covid restrictions in Hong Kong. 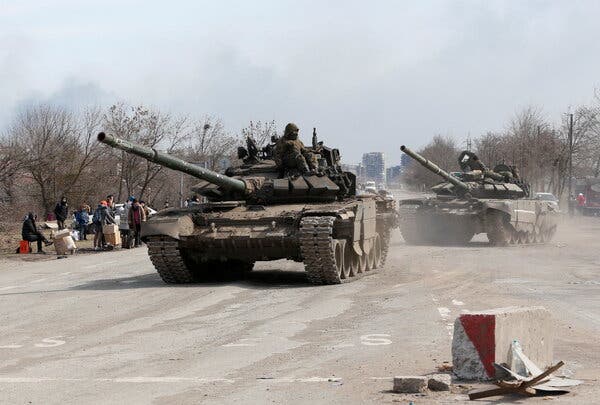 The bloody fight for Mariupol

“My city is dying a painful death,” one survivor wrote after she escaped. “For twenty days I was dying with it. I was in hell.”

A powerful blast also rocked Kyiv on Monday and reduced a sprawling shopping mall to rubble. A Times reporter saw six dead bodies there covered in plastic, as rescue workers battled fires and pulled more victims from the wreckage. Here are live updates.

Context: After nearly a month of fighting, the war has reached a stalemate. Russia is turning to deadlier and blunter methods, including targeting civilians, as it suffers troop and equipment losses that would limit its ability to mount offensives.

Resistance: About two million people who remain in Kyiv are galvanized by a newfound unity. In the ancient city of Lviv, simple rituals have taken on a new and sometimes surreal meaning.

Diplomacy: The Ukrainian president, Volodymyr Zelensky, is drawing on other nations’ histories of struggle to rally support, invoking the civil rights movement to U.S. lawmakers and the fall of the Berlin Wall to Germans. Our chief fashion critic also analyzed his most famous garment: the olive green T-shirt.

A piece of wreckage of the China Eastern plane.Credit…Xinhua, via Associated Press

A Boeing 737 crashes in China

A passenger plane with 132 people on board crashed on Monday afternoon in the Guangxi region, a mountainous area of southern China. It was unclear if any of the crew members and passengers survived.

The plane descended more than 20,000 feet in just over a minute, according to data from a tracking platform. The model, a Boeing 737-800, is a mainstay of airline fleets around the world with a strong safety record and the flight was operated by China Eastern Airlines, China’s second-biggest carrier, which has not had a crash in 18 years.

Plane: The plane was not a Boeing 737 Max, a newer model that has not resumed flying in China after a ban prompted by deadly crashes in Indonesia in 2018 and Ethiopia in 2019. China has had a strong airline safety record after a succession of deadly accidents in the 1990s.

The streets of Hong Kong were lively on Monday.Credit…Anthony Kwan/Getty Images

Carrie Lam, Hong Kong’s leader, announced on Monday that the city would lift its ban on flights from nine countries on April 1 and cut quarantine times for vaccinated residents returning from overseas from 14 days to seven.

Experts and government officials there said the worst of an Omicron-driven wave might have passed, and that residents are more at risk of infection from community transmissions than from imported cases.

But even though its new measures remain some of the strictest in the world, Hong Kong’s approach appears to be diverging slightly from that of mainland China, where Shanghai and Shenzhen remain in lockdown.

Background: For most of the pandemic, Hong Kong has sealed itself off from the rest of the world, and required travelers to quarantine for as long as three weeks in a hotel.

Just over half a century ago, there were only about three dozen red-crowned cranes in all of Japan. There are now 1,900, thanks to the work of conservators, but few scientists think they could survive without human feeding.

Signs of a stalemate amid stalled talks. After nearly a month of fighting, the war appears to have reached a stalemate. President Volodymyr Zelensky of Ukraine has called for renewed peace talks with Russia, despite few signs of progress after four days of negotiations last week.

Mariupol refuses to yield. Ukraine rejected a demand to surrender the embattled southern port city, where Russian forces have broadened their bombardment and forcibly deported thousands of residents, according to local officials.

Biden’s diplomatic push. President Biden will travel to Europe for talks with some of America’s closest allies this week, in his most direct effort yet to rally opposition to Russia’s invasion. One of the most potentially divisive issues will be Poland’s proposal for a NATO peacekeeping mission.

The long-running Eurovision Song Contest pits countries against one another for pop supremacy. Acts like ABBA (Sweden), Celine Dion (Switzerland) and Julio Iglesias (Spain) were all competitors once.

Now, the U.S. wants to recreate some of Eurovision’s magic with “American Song Contest,” hosted by Kelly Clarkson and Snoop Dogg. Here’s a primer.

Will I know any of the songs? Nope, they have to be new, though contestants don’t have to write their own stuff.

Who’s competing? The contest has 56 entries. Jewel (who grew up yodeling in famously tough conditions in Alaska), Michael Bolton (Connecticut) and Sisqó (Maryland) are among the famous names.

Eurovision has some crazy performances. Will this version? “One person’s cliché is another person’s truth,” an executive producer said. “Some of them are self-aware, some of them aren’t.” — Sanam Yar, a Morning writer

Pad Thai is Thailand’s national dish, and easy on the home cook. Abroad, it’s part of the Thai restaurant canon.

The founders of Mejdi Tours think travel can be a force for peace.

Charlotte Gainsbourg makes her directorial debut in “Jane by Charlotte,” an elusive portrait of her mother, the French-English star Jane Birkin.

P.S. The Times announced its 2022-23 Fellowship Class, the fourth cadre of early-career journalists to join the newsroom for a year.

The latest episode of “The Daily” is on Covid.