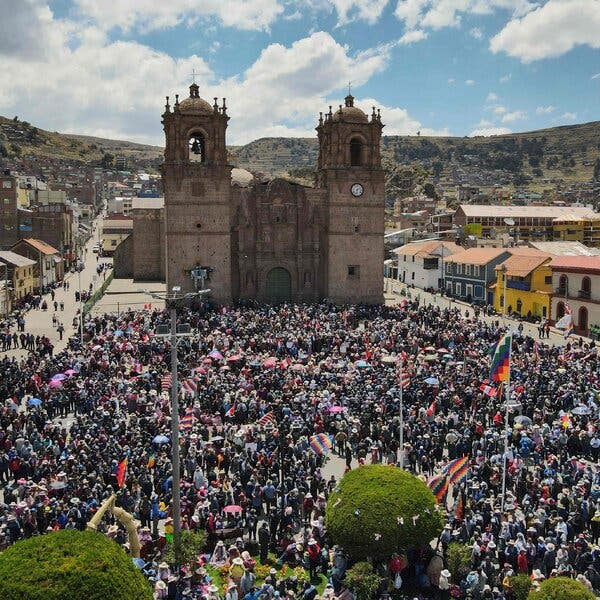 Death toll in Peru rises to 47

Dozens of people have died in southern Peru in clashes between protesters and government forces since early December, including at least 17 civilians and one police officer who were killed Monday in the city of Juliaca, near the border with Bolivia.

It was part of an extraordinary spasm of violence that further complicated the new president’s attempt to stabilize the country after weeks of demonstrations. The Monday killings drew widespread condemnation of the Peruvian security forces, which appeared to be responsible for most of the deaths and have been accused by protesters and human rights groups of using lethal force indiscriminately against civilians.

Monday’s events were the deadliest single clash between civilians and armed personnel in Peru in at least two decades, when the country emerged from a dictatorship as well as from a long and brutal fight with a violent guerrilla group, a conflict that left at least 70,000 people dead, many of them civilians.

Background: After the country’s leftist president, Pedro Castillo, attempted to dissolve Congress and rule by decree, he was arrested and replaced by his vice president. His supporters, many of them living in impoverished rural regions, quickly took to the streets to demand new general elections.

Quotable: “What happened yesterday was really a massacre,” one human rights activist said.

Ukrainian soldiers firing a howitzer into a Russian-held town.Credit…Nicole Tung for The New York Times

After months of setbacks, a potential Russian victory

Yevgeny Prigozhin, the head of a Russian mercenary organization known as the Wagner Group, claimed yesterday that his fighters had seized the Ukrainian town of Soledar, the recent site of brutal combat, a claim that could not be verified. If true, it would mark the first significant Russian victory in months.

Earlier in the day, Britain’s defense ministry said that Russian forces were probably in control of most of Soledar after four days of particularly intense fighting, with heavy casualties, against fierce Ukrainian resistance. The town had become the focal point of Russia’s monthslong campaign to seize the city of Bakhmut, several miles to the southwest.

The battle highlights the war’s return to grinding attrition in the last two months, after a period of offensives over wide swaths of land. “Everything is completely destroyed; there is almost no life left,” Volodymyr Zelensky, the Ukrainian president, said of Soledar. He asked the same question many analysts and experts were posing: “What did Russia want to gain there?”

Supporters of Jair Bolsonaro who were arrested after Sunday’s attack.Credit…Victor Moriyama for The New York Times

The authorities in Brazil issued arrest warrants for two government security officials, zeroed in on people suspected of funding this week’s violent protests and asked a federal court to freeze the assets of the far-right former president, Jair Bolsonaro, after an invasion of Brazil’s Congress, Supreme Court and presidential offices by protesters on Sunday.

The Brazilian Supreme Court justice who issued the warrants for the two security officials said that investigators had evidence that the officials had known that violence was brewing but had done nothing to stop it. He said that they were under investigation on suspicion of terrorism, criminal association and offenses related to the violent overthrow of democracy.

The request to freeze Bolsonaro’s assets is now in the hands of a judge, but it is unclear whether the court has the legal power to block his accounts. Freezing assets, even if it were not challenged in court, could prove a lengthy and complex process. The authorities are also expected to take action against more than 100 companies that are thought to have helped the protesters.

Lula: Luiz Inácio Lula da Silva, the president, said that he believed prominent players in the country’s powerful agriculture industry had played a role in the storming of the government buildings. “These people were there today, the agribusiness,” he said. “All these people will be investigated, found out, and will be punished.”

Facebook remade the virtual world. For a brief period, it also tried to reshape the physical one. The company hoped to make it easier for people in the Bay Area to get to work, by building a rail system that could alleviate traffic, cut down on emissions and shrink commute times for those who couldn’t afford to live near their workplaces. Then it gave up.

“This is a once-in-a-lifetime opportunity to really benefit the region,” one advocate for the rail system said. “And it’s dead.”

SPORTS NEWS FROM THE ATHLETIC

The prodigies shaping the future of Barcelona and Real Madrid: Eight outstanding young players have the talent to take the clubs into a new era. One hurdle: chemistry.

How Manchester United recruits: Manchester United’s scouting and recruitment network has developed hugely since the days of Alex Ferguson. Erik Ten Hag is using the framework that is in place, while adding some emphasis of his own.

Gareth Bale’s retirement is the end of a Wales era: Teammates, coaches and Bale’s old physical education teacher reflect on his love of Wales and the remarkable impact he had on the national team.

“Spare,” Prince Harry’s memoir, is an emotional and embittered book, Alexandra Jacobs writes in her review for The Times. The entire project is mired in a paradox, she writes: Harry has drawn endless attention in his stated effort to renounce his fame. “He seems both driven mad by ‘the buzz,’” she writes, “and constitutionally unable to stop drumming it up.”

Harry is by turns raunchy, joking about a frostbitten penis and how he lost his virginity, and vindictive, detailing fights with Prince William and portraying his brother as entitled and violent, not to mention bald. And he grieves his mother, Princess Diana, with his repressed recollections unlocked by therapy and a whiff of First by Van Cleef & Arpels.

The book’s publication seems likely to dash any near-term prospects that Harry will return to the fold by reconciling with his father, King Charles III; with Camilla, the queen consort; or with his older brother, Prince William, writes Mark Landler, our London bureau chief.

The deepening rift could complicate Charles’s coronation, planned for May. And the memoir may also finally exhaust the public’s interest in the self-exiled couple, even in the U.S. Still, the ubiquitous coverage is unlikely to damage sales, at least in the short term.

For more: Along with the juicy tidbits Harry offers up on his own life, there is also a revealing look at how the royal family, and its staff, operate behind closed doors.

Double the arugula in this buttery lemon pasta for a more vegetable-forward meal.

The pings of our smartphones have shortened our attention span. Here’s how to focus.

How nonbinary professionals get dressed for the office.

Here’s today’s Mini Crossword, and a clue: Base cards in solitaire (four letters).

P.S. A host of talented new colleagues are joining our Audio department.

The latest episode of “The Daily” is on Southwest’s meltdown over the holidays.

You can reach Natasha and the team at [email protected].

Tags
Have New Said That With