We’re covering Russia’s struggles to advance in Ukraine and efforts to unseat the prime minister of Pakistan, Imran Khan. 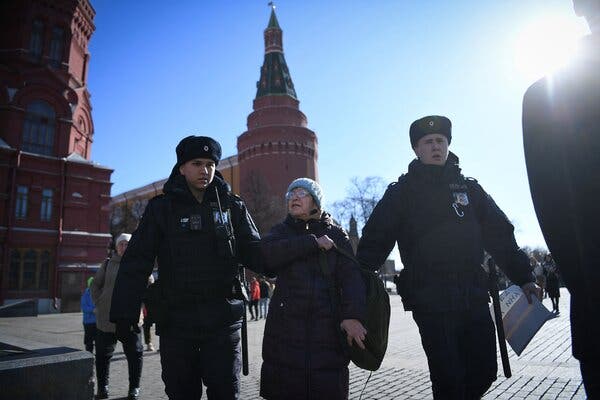 A Russian court sentenced the already imprisoned opposition leader Aleksei Navalny to nine years in prison on fraud charges, a move widely seen as a way for the Kremlin to more tightly control the war’s narrative.

Navalny’s extended sentence came as Russia amended an already draconian censorship law to make “discrediting” the activities abroad of all government bodies a potentially criminal offense, punishable up to 15 years in prison. Navalny has been urging Russians to protest the invasion of Ukraine through letters from jail that his lawyers post on social media.

On the ground, Russia has made little progress in its effort to encircle Kyiv, Ukraine’s capital. Ukrainian officials said they had raised their flag over Makariv, a town about 40 miles from the capital, where control has gone back and forth between Russian forces and Ukrainians.

The U.S. has assessed that Russia’s “combat power” in Ukraine has fallen below 90 percent of its original force for the first time, reflecting the losses Russian troops have suffered.

In the air: Nearly a month into the fighting, one of the biggest surprises of the war is Russia’s failure to defeat the Ukrainian Air Force. The success of Ukrainian pilots has helped protect the country’s soldiers on the ground and prevented wider bombing in cities.

In Chernobyl: Wildfires in the forest that surrounds the nuclear plant raised worries about radioactive smoke.

In China: Despite calls from world leaders that it play a more proactive role in helping to end the war in Ukraine, China has tried to keep its distance from the conflict. Its leader, Xi Jinping, has urged peace but has not stepped up to mediate or organize talks.

Art: Museums in London and Paris are grappling with how to return art to Russia, and whether works on loan from the country will ever be seen again in Europe.

Pfizer will send millions of Covid pills to poorer countries

Pfizer said it planned to sell up to four million treatment courses of its Covid-19 pills for use in lower-income countries, with the first supplies expected to become available next month.

In a supply agreement with UNICEF, the children’s aid arm of the U.N., Pfizer agreed to sell its pills at a nonprofit price to 95 lower-income countries that are home to about four billion people. In some cases, UNICEF’s pooled Covid fund may pay for the treatments, a spokeswoman said.

Pfizer’s treatment, known as Paxlovid, has been found to be highly effective in preventing severe disease in Covid patients when given early in the course of an infection. It is thought to have promise in lower-income countries because it is given in pill form, taken at home and easily stored at room temperature.

While the Pfizer pills will most likely be the first Covid drugs available in many of the poorest parts of the world, wealthy countries have locked up much of the 120 million treatment courses the company said it could produce this year.

In other pandemic news:

Pakistan’s prime minister, Imran Khan, could soon be removed from office, as soaring inflation and a rift with the military threaten his grip on power.

Opposition political parties moved for a vote of no confidence in Parliament after it appeared that Khan had lost his majority support and the backing of the country’s powerful military. Last week, Khan’s party was rocked by the defection of at least a dozen lawmakers who accused their leader of failing to tackle double-digit inflation. Khan, a former cricket star, denounced his critics as part of an American-influenced conspiracy.

“He’s a fighter,” Arif Rafiq, president of a political risk advisory company in New York, said. “But it simply just doesn’t look like he’ll have the numbers to survive a vote of no confidence.”

Of particular importance is the military’s dissatisfaction with Khan, whose 2018 election was widely credited to the military’s backing. The country’s generals appeared to sour on Khan for trying to place a loyal aide in charge of the army over the objection of high-ranking officials.

What’s next: Before the vote, which is expected as early as next week, Khan said he would gather a million supporters for a rally in Islamabad this weekend. The opposition responded by announcing a counterprotest, raising fears of violent confrontations.

Facing criticism from politicians and environmentalists, the cryptocurrency mining industry has embarked on a rebranding campaign to challenge the view that its electricity-guzzling computers harm the climate. The effort — partly a public-relations exercise, partly a genuine attempt to make the industry more sustainable — has recently intensified.

The homes of artists and other creative people

In Los Angeles, there’s a cocoonlike 1960s house, bathed in shades of mauve, that was formerly owned by the writer Anaïs Nin. (One of Frank Lloyd Wright’s grandsons designed it.) In North Carolina, four Black artists are preserving the childhood home of the singer Nina Simone. A former agricultural commune near Berlin, once the farmhouse of the artist Danh Vo, has become a lush retreat.

And for the color-averse, there’s no shortage of neutral designs from which to seek inspiration — though this children’s bathroom is a sugary pastel delight.

Try a one-pot meal with chicken thighs, vegetables and rice.

The third season of Donald Glover’s surreal comedy series “Atlanta” is set in Europe, as the fictional rapper Paper Boi goes on tour.

Helen Rappaport’s “After the Romanovs” explains why Paris became the gravitational center for exiles both before and after the Russian Revolution.

That’s it for today’s briefing. See you next time. — Matthew

The latest episode of “The Daily” is about Russian oligarchs.