Todd Haynes’s new documentary, “The Velvet Underground,” summons that band’s essence by being a feast for … the eyes. The screen is almost constantly split into self-contained images that are in conversation with each other, at times creating a dizzying sensory overload. Some of the most striking scenes use images shot by Andy Warhol, who was a crucial presence in the band’s life and art.

“We licensed two and a half hours of moving images for a two-hour-long movie,” Haynes said, laughing, “and I think 45 minutes of that is probably Warhol movies alone.”

Evoking a sound world by relying heavily on visuals might feel counterintuitive, but Haynes, 60, has never followed the predictable path. His 1991 feature debut, “Poison,” was a linchpin of that era’s New Queer Cinema movement, and since then he has maintained a stubbornly independent streak, from the prescient psychological horror of “Safe” (1995) to the lush lesbian romanticism of “Carol” (2015).

Haynes’s queering is particularly effective in music-centric movies, a field that has often been dominated by a straight-male point of view.

He burst on the scene in 1987 with the 43-minute-long biopic “Superstar: The Karen Carpenter Story,” which was cast with dolls. In 2007 he made “I’m Not There,” with six actors, including Cate Blanchett, playing Bob Dylan, or at least versions of Dylan. Even Haynes’s contribution to the HBO omnibus “Six by Sondheim” (2013) departed from convention: Whereas an older female performer usually handles the “Follies” number “I’m Still Here,” he had the former Pulp frontman Jarvis Cocker croon it to a dimly lit cabaret full of women, a neat reversal of the male gaze.

“The kinds of subjects I want to make films about are not just because it’s music I love,” Haynes said. “They’re about cultural moments where the artist, or the genre of music, changes things or reflects changes in the culture. Or they set up an example of a unique — and usually in my mind radical — experiment where the artist succeeds in playing around with notions of identity through music and through performance.” 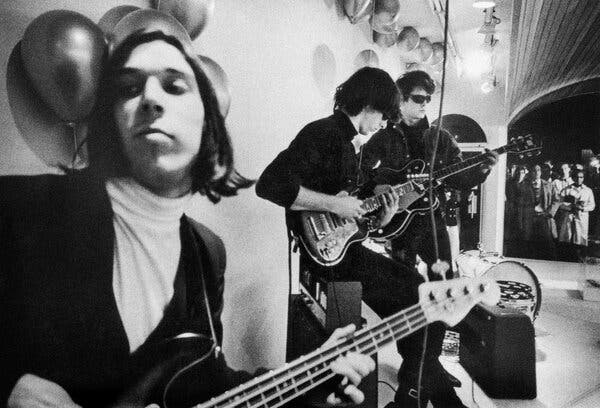 The Velvet Underground, the wildly influential 1960s-70s quartet led by Lou Reed, is a perfect illustration of that confluence. The problem is that unlike, say, the Beatles, the band did not leave much footage behind. Haynes turned that handicap into an artistic asset by zooming out instead of in. “I immediately made a decision that I wanted to focus on the time and place in New York City,” he said.

The musicians had all been drawn into Warhol’s orbit early on, so Haynes talked to insightful members of the artist’s circle, like the actress Mary Woronov and the critic Amy Taubin. Tellingly, one of the most compelling witnesses is Jonas Mekas, the curator and experimental filmmaker who was interviewed shortly before his death in 2019.

Haynes said that with his music-related projects, “I’m always trying to find the cinematic parallels or stylistic traditions that are relevant either to the time or to the spirit, the ethos of the music. And in this documentary I had handed to me, basically on a platter, this avant-garde cinema, which is so intrinsically bound up in the story of the Velvet Underground.”

This approach has been a hallmark of Haynes’s music work. “He’s not looking at different mediums as separate entities but trying to integrate them together and create this synthesis of music and art and philosophy,” said Michael Stipe, the former R.E.M. frontman who was an executive producer on “Velvet Goldmine,” Haynes’s 1998 feature about the glam-rock scene. “Because at the end of the day, really, he’s a philosopher,” Stipe continued.

The Velvet Underground’s John Cale — who participated in the movie along with his bandmate Maureen Tucker — was familiar with the director’s work, and trusted the band’s legacy would be in the right hands. “I knew if anyone could pull together the historical artifacts and make them come to life, it was Todd,” Cale said in an email. “His ability to pull emotion from stills and ephemera is further testament to his true understanding of who we were and what we wanted to leave in this world.” (The band’s third surviving member, Doug Yule, declined to take part in the film.)

Cale’s reference to emotion touches on an important Haynes trait. In interviews, the director speaks in heady, paragraph-long sentences, which might suggest an abstract, perhaps detached body of work. But his formally rigorous films are roiled by tempestuous feelings and emotions. If “Superstar” — which cannot be shown commercially because of a cease-and-desist order by the music rights’ holders — has a cult following, it is not because of its gimmick but because it is so unexpectedly affecting.

On that project, “I was thinking about how to make a film that would follow narrative conventions so closely that an audience would find itself caught up emotionally,” Haynes said. “But it wouldn’t be because an actor is doing those things — it would be a doll.”

He has explored the formation (and transformation) of identity in his music-related work, but also fandom and its attendant heightened expectations. Haynes has always been very conscious of such hopes — especially when they are based on gender and sexuality, an area in which rock has been simultaneously groundbreaking and retrograde.

Maybe that’s why the musicians in Haynes’s movies draw heated responses from real-life viewers and other characters. The Carpenters were still widely derided as milquetoast soft rock for girls and housewives when “Superstar” came out, and the film helped lead a critical reappraisal of the duo in the early 1990s. Admiration and rejection partly based on the scrambling of gender roles feature prominently in “Velvet Goldmine” via the knotty relationship involving a journalist and a pair of flamboyant rockers — one inspired by David Bowie and the other an amalgam of Iggy Pop and Lou Reed.

It would be hard to find a more complicated figure than Reed, who left the Velvet Underground in 1970 and embarked on the fruitful solo career evoked in “Velvet Goldmine.” He was the kind of wildly creative, mercurial figure who is catnip to documentarians, and he is everywhere in the new film: a voice, either singing or heard in interviews; an unsmiling face staring us down; at times a presence felt more than seen.

And yet even after those two hours, Reed, who died in 2013, remains an enigma, much like the Velvet Underground itself. Haynes did not call on critics or historians to venture theories or explain the band’s importance, and the closest we come to a musicological analysis is delivered by the eccentric Velvets protégé Jonathan Richman.